Russian artist Vasily Vereshchagin (1842-1904) had the amazing and extremely solid destiny. The pupil of the Cadet Corps, an officer, a man of great courage and composure, he appeared wherever it was dangerous, where the whistling bullets and nucleus bloodshed. Vereshchagin was in Turkestan, in the Russian-Turkish war in the Balkans, was in the thick of the battle at Plevna and Shipka. He met his death as a soldier on board the battleship “Petropavlovsk”, undermined in 1904 by a mine in the Sea of ​​Japan.
And all his life he passionately hated war. Hated the brutality of war, death, which it carries to thousands of people in need, grief, pain, loss of irreplaceable – constant companions of war. He hated those to whom it is profitable. “War Against War” – was the motto of the life and work of the greatest battle artist Vereshchagin, “the apostle of humanity”, as called by his contemporaries. 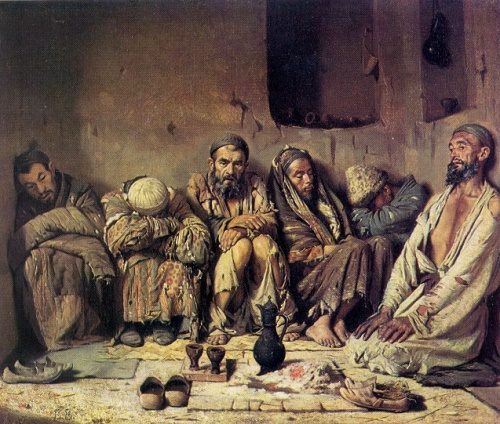 Russian artist Vasily Vereshchagin became known as a famous battle-artist. In 1867, he gladly accepted the invitation of the Turkestan Governor-General KP Kaufman to work with him as a painter. He twice visited Central Asia, in 1867-68 and in 1869. His interest in the specific character of this country found its expression in а large number of studies. These are landscapes, genre scenes and paintings оп battle themes. In 1871-73 the artist produced his Great Turkestan series the better part of which consisted of battle pieces.
In the autumn of 1867 Vereshchagin spent several months in Tashkent, working оп the painting
Opium-eaters. His gift of observation, his powerful insight into human grief and his sympathy for the wretched реорlе revealed in this canvas immediately attracted the attention of his contemporaries. Among them were I. Repin and I. Kramskoy who praised the picture highly. Тhе Opium-eaters was shown at the 1872 World Exhibition in London and did not pass unnoticed.

Soon after that the outstanding Russian art critic V. Stasov published his article “English Press Comments оп Vereshchagin’s Pictures”, and in 1883 in the essay “Vasily Vasilyevich Vereshchagin” the same author referred to ап opinion voiced in the Times stating that the paintings of Vereshchagin were so “striking in their truth and forcefulness that they produced ап unforgettable impression”. 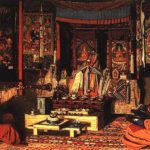 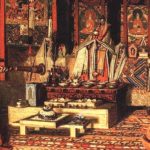 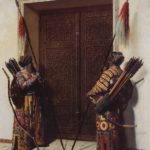 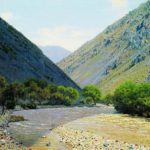 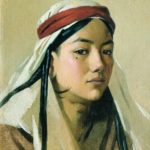 Portrait of a bacha (boy) 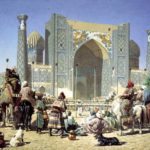