Mysterious Russian Blue Stone Sin-Kamen
Sin-Kamen, or Blue Stone – a true ritual stone, preserved from the immemorial time. The sacred stone is located near lake Pleshcheyevo, Pereslavl-Zalessky, southwest of Yaroslavl region. This stone in dry form appears grayish, unprepossessing, but after the rain its color changes, and wet surface becomes dark blue. These are the properties of Metamorphic quartz rock, of which consists a huge boulder. The thickness of the Blue-stone is 0.6 meters, length – 3,1 m, width – 2.6, presumably weight – 12 tons. But now you can not see the whole of this wonder of nature – a stone slowly goes underground, although a few decades ago, it towered above the almost life-size.

However, a variety of movement – for this stone is habitual. According to one legend, blue stone was on top of Alexandrova mountain, where there are still traces of a pagan temple. But there is no documentary evidence. Most likely, it lay near Borisoglebskii monastery, as mentioned in the Life of Irinarkh of Rostov (XVII century). Blue Stone was then taken to the shore of the lake where the locals began to organize bonfires, various pagan festivals, such as the day of Ivan Kupala.

Exhortations of monks came to nothing, and ugliness continued. On the advice of the Reverend Irinarkh, clerk Onufry buried stone. Rumor odds what after this happened to him. Some said that Onufry started to hurt badly, others stated the contrary – he has recovered from a fever.

But in any case, the monks got rid of lewd and unclean spectacle stone. But not for long – the stone came out onto the surface. In 1788 people wanted to lay it at the base of the bell tower to hide it forever from the wicked. In winter, it was loaded onto huge sleigh and transported across the icy lake to the construction site. But the ice was too fragile, and the stone sank at a depth of one and a half meters. Then it seemed the end of the tale. But … not the end of Blue Stone. How it came out of the lake and moved to the shore is still a mystery.

Over the next 70 years, ice hummocks, water storms, and God knows what processes pushed the stone to the shore, where it eventually appeared. Blue Stone to this day attributed the miraculous properties – they say it heals from illness, and helps in trouble. Therefore, the stone is visited by pilgrims, lovers of the occult sciences, and various neo-pagans.

Alexandrova mountain is considered the origin location of Blue Stone. It is believed that this artificial hill was built by Grand Duke Alexander Nevsky at the place where he spent his childhood. It is believed that barren women should move down from the mountain bare butt to get pregnant. Photo by VadimV. 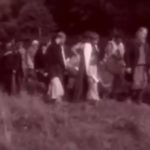 the locals participated in various pagan festivals, such as the day of Ivan Kupala 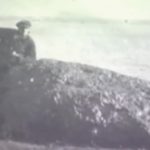 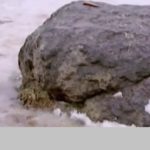 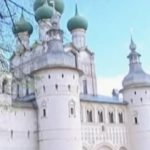 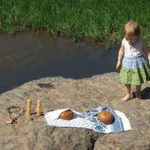 A little girl walking on The Blue stone