Church of the intercession

The Church of the Intercession on the Nerl. View from north-west

The Church of the Intercession on the Nerl, like the Lay of Igor’s Host and Andrei Rublev’s icons, is one of the greatest creations of early Russian artistic genius. For eight centuries it stood on the Suzdal land, a small white island amid luscious green water meadows. The church is in harmony with the mood of the surrounding countryside and seems to be an integral part of it rather than a creation of a man.

The Church of the Intercession on the Nerl is testimony to the energetic building activities of Prince Andrei Bogolyubsky. It was erected on the River Nerl near its confluence with the River Klyazma, a kilometre and a half from Prince Andrei’s residence in the village of Bogolyubovo. It was consecrated to the new Russian church feast of the Intercession of the Virgin, which symbolized the Heavenly Queen, the patron of Vladimir Principality and of its prince.
Architecturally the Church of the Intercession on the Nerl is a typical example of Vladimir-Suzdal architecture. At the same time it is inimitable in its beauty. This fine, graceful building radiating light as it were, does not seem to be erected of heavy white limestone slabs, but rather of something airy, almost weightless. All means possessed by the builders were subordinated here to a single purpose: to give the building an added sense of slender verticality. Vertical lines predominate in the decorations of the fagades and the small groups of stone carvings in the arches of the facades are placed in such a way as not to stress the horizontal lines of the masonry. 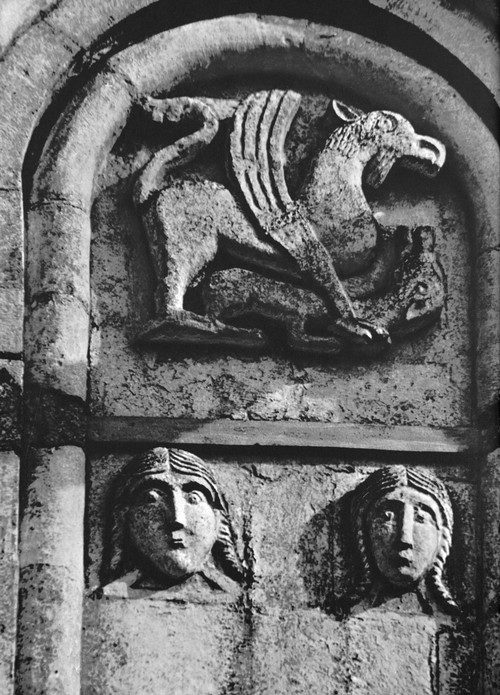 The verticality of the whole edifice is achieved with soft flowing lines. The pilasters decorating the fagades end in soft arches and the deeply splayed portals in semi-circular archivolts, while the engaged columns of the drums and the outlines of the windows form arches of various configuration. The general motif of softly rounded-off vertical is stressed throughout in the architectural ensemble of the church.
The overall perpendicular effect was even more apparent in the original appearance of the church when it had a gallery running round three sides. On the south-western corner there was a tower and a staircase leading to the upper gallery. The artificial hill on which the church was erected was paved with white-stone slabs. 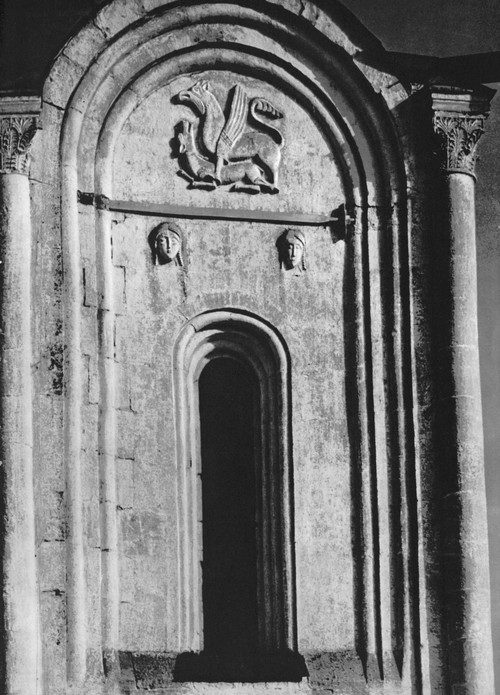 22 North fagade. Upper part of the central and western sections

The architectural lines of the church have almost the rhythm of a hymn. It is a lyrical song materialized in stone.
The breadth of poetic generalization in the carved compositions of the church is in fact the source of their artistic influence on the people at a time when the people no longer remembered their symbolism, which had once so impressed the contemporaries of the Vladimir autocrats.
The church had not lost its exquisite beauty with the passing of time, though it has assumed a more modest aspect. The storms and strifes of past centuries deprived the church of its majestic splendour, stripped it of its festive raiments of galleries, covered it with a new roof an ugly affair which disguises the base of the slender drum, and replaced the proud golden helmet with a dark onion dome resembling a monk’s cowl.
But even with its present appearance we appreciate and admire the anonymous Vladimir builders and the work of art they have created. 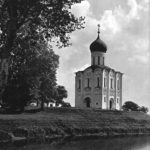 The Church of the Intercession on the Nerl. View from north-west 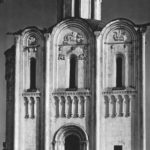 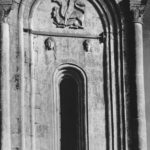 22 North fagade. Upper part of the central and western sections 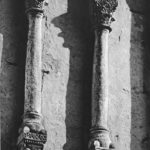 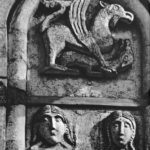 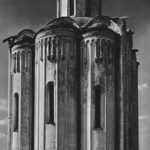 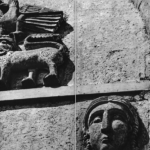 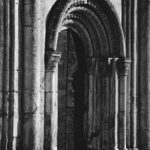 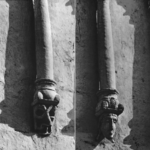 Interior. View from west side.