Edged weapons from Zlatoust 19th century
Among the famous repositories of Russian arms and armor are the Hermitage in Leningrad, the History Museum in Moscow and the Museum of Regional Studies in the town of Zlatoust. In addition, the collection of the Museum of the Artillery, Engineering Corps and Communication Troops in Leningrad. This collection consists of edged weapons decorated by craftsmen of Russia, Georgia, the North Caucasus, India, Japan, and the Near East. A special section comprises works from the Zlatoust Arms Factory, which include over 150 sabres and palashes, small-swords and rapiers, backswords, daggers and hunting knives. And all manufactured in the nineteenth century. A large number of decorated edged weapons date from the 1820s and 1830s, when the art of arms-making at Zlatoust reached its highwater mark. 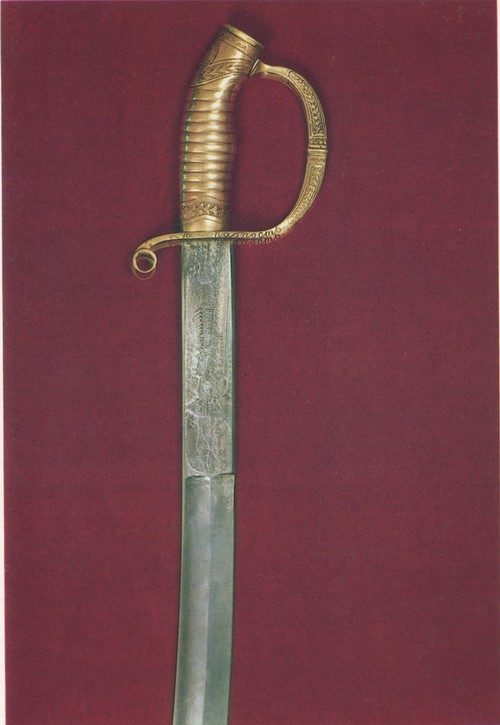 Prior to the nineteenth century, decorated blank arms were, on the one hand, made by individual gifted craftsmen who passed their skills and knowledge from father to son, and, on the other, were produced at the Moscow Armoury and other state-owned factories. The steadily increasing demands for decorated arms were met by home-made articles and those imported from various centers in Western Europe, above all Solingen and Klingental. At the end of the eighteenth century, the idea was put forward of creating a national center for manufacturing side-arms in general, and decorated weapons in particular. The rich mineral resources and the developed metallurgical industry of the Urals were conducive to the fact that on February 20, 1807, Tsar Alexander 1 issued a decree obliging the Senate to work out a design and start building a factory for the production of cold steel at the Zlatoust Ironworks founded in 1754 near Mt Kosotyr on the Ai River.
The design of the factory was submitted for approval in 1811, but construction began only after the War of 1812 and the final defeat of Napoleon’s armies in 1814. Several shops and workshops were put into operation at the close of 1815, while the rest were completed at a later date. From 1817, the production of all kinds of edged weapons in Russia was concentrated at the Zlatoust Factory, which turned out hussar officers’ sabres, cuirassiers’ and dragoon officers’ palashes, army and guards broadswords, hunting knives, etc. The factory was also entitled to fulfill special commissions from the imperial court, that is, to provide decorated (parade) weapons for ceremonial purposes. Although during that period Russia had quite a few brilliant masters of blade decoration, a number of foreign experts were invited from Solingen and Klingental to help organize the production of blank arms at the Zlatoust Factory. In 1815, a group of foreigners arrived in Zlatoust, among them Wilhelm Nicholas Schaaf with three sons: Ludwig, a specialist in etching and gilding, and Johann and Friedrich, experts in lacquering leather sheaths. According to the contract, these foreigners had to teach Russian workmen all the knacks of their trade. 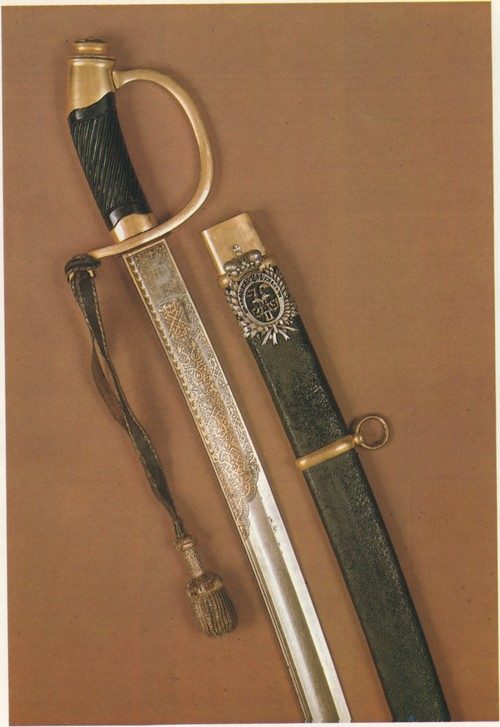 Among the first Russian pupils of the Schaafs were Ivan and Yefim Bushuyev, Ivan Boyarshinov, the brothers Telezhnikov, Semion Fetisov, and Mikhailo Cherepanov. All of them, except Semion Fetisov, were thirteen — or fourteen-year old teenagers. However, before they began their training under the Schaafs they had received a basic instruction in painting and drawing at the factory school, where much attention was paid to these disciplines. Later on, they perfected their skills in the drawing office under the then famous draughtsmen A. Telezhnikov and Nikolai Bushuyev.

The young Russian engravers carefully studied the traditions of Tula gunsmiths, taking advantage of the factory arsenal’s stocks, and devoured books on history, mythology and applied art kept in the factory library. Some of the future Zlatoust decorators, such as Ivan Bushuyev, Ivan Boyarshinov and Semion Fetisov, had an outstanding artistic talent. In a mere three moths of training, the Russian pupils not only mastered the Schaafs’ techniques of applying designs onto metal, i. e. the blade’s surface, but also developed methods entirely their own. These increased the creative opportunities of Zlatoust craftsmen, gave a freer hand to the engraver and made possible the implementation of new themes and compositions.

In 1818, nineteen blades decorated by the young Russians without any assistance of the Schaafs were sent to the Department of Metallurgy and Salt-Mines in St Petersburg. This was indeed the first test of their professional powers, and after successfully standing the test they took an active part in the organization of production processes at the Zlatoust Factory. From that time on, decorated edged weapons were almost exclusively manufactured by Russian craftsmen. The Schaafs were mainly concerned with matters of general management and no longer did any creative work, although up until 1823, when they left the factory, they often put signatures on works by their pupils. 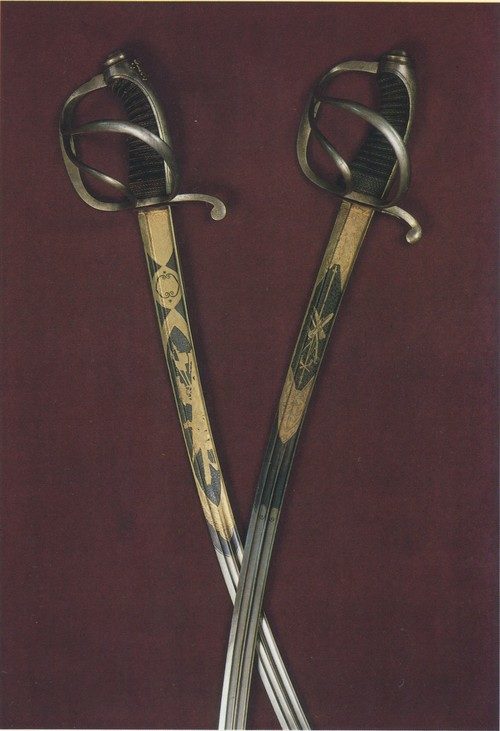 The Schaafs brought to Russia the method of blade decoration which prescribed that individual designs, not related thematically, be engraved on the blade’s surfaces. Even when in some cases attempts were made to unite such desighs on the blade’s plane, it was done mechanically, with the help of a frame wherein the designs were enclosed (1). As a rule, the Schaafs favoured compositions of swords, shields and spears combined with representations of cupids, laurel leaves, etc.

Russian artists created their own style of embellishing the blade. This was distinguished by thematic and composition expressiveness and a full harmony between designs and the blade’s surface. The solemn, clear-cut composition schemes, the use of allegoric images and motifs from Greek mythology all speak of the influence that the Empire style, then dominant in Russia, exercised on the development of blade decoration in Zlatoust. Factory artists employed a variety of means best suited to extol the might and glory of the Russian armies in their struggle against foreign invaders. They drew well-balanced compositions, the so- called “armatures”, comprising Russian weapons, glorious banners and standards, military headgear and musical instruments.

One of the most interesting aspects characterizing the highly distinctive, Zlatoust, style of blade decoration was its thematic range. Its originator was Ivan Bushuyev (1800—1834), who traveled the road from a pupil of the Schaafs to one of the most illustrious engravers of the Zlatoust Factory. Bushuyev managed to excel his teachers both in the art of making designs and in the technology of their application onto the metal. Having mastered the blade production process as a whole, Bushuyev was able to develop a fine feeling for the structure and color of blade material. This helped him to use with greater subtlety the natural glitter of polished steel or the shimmering light of its dead surface, which he enhanced or softened by blueing and gilding.

Ivan Bushuyev, the founder of Zlatoust steel engraving. And like many contemporary Russian artists, he borrowed his subject matter from Greek history and mythology, introducing into his “armature” compositions allegoric images, Greek gods and classical warriors (10, 11, 12—14). The most important in his work, however, are his miniatures on themes from Russian history. Bushuyev was the first at the Zlatoust Factory to decorate blank arms with multi-figure battle scenes, resolving them on a vast, panoramic scale. 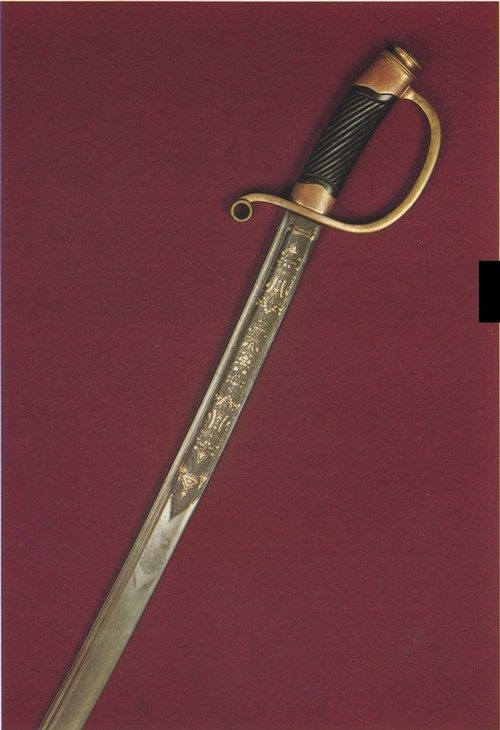 The War of 1812, from which Russia emerged victorious, was an inexhaustible source of inspiration for Bushuyev and his fellow artists. His miniatures on this theme are essentially realistic, and their realism coexists with the mythological and allegorical imagery which helped extol the events presented. Worth mentioning are the miniatures on the surfaces of a small-sword (73—76) depicting a battle between the Russians and the French in 1812. Each of these fascinating miniatures is rendered with amazing authenticity and deep emotion.

Dating from the 1820s is a whole series of edged weapons manufactured by Zlatoust craftsmen to commemorate the 10th and 15th Anniversaries of Victory in the War of 1812. The blades of such weapons are not only decorated with arms and armor and battle scenes, but also feature ornament inscriptions indicating the dates and names of the places where the Russians fought their fiercest battles against the French between 1812 and 1814. These honorary presentation weapons were intended for the officers and generals who covered themselves with glory during the war.

One of Bushuyev’s direct followers and successors was Ivan Boyarshinov (1804 -1848), an outstanding folk artist and gifted craftsman, who developed and perfected the established traditions of Zlatoust art. As evidenced by his works in the museum, his artistic manner took shape under Bushuyev’s influence. Both craftsmen were frequently attracted to themes reflecting the toil of ordinary Russian workmen, which was quite out of tune with the spirits of the time. By employing a frieze-like arrangement of miniatures on the surface of a blade, they reproduced the entire process of blank arms manufacture, from the extraction of ore to the trials for the strength and flexibility of weapons.

Boyarshinov was one of the first factory engravers to take a fancy to oriental motifs (90, 94). At times such motifs are interwoven with elements of classical decoration, giving rise to a peculiar eclectic style. Gradually the ornament became the main decorative motif in his works.
The use of Damascus and Obukhov steel in blade-making and the impeccable artistic quality of their ornamentation won wide fame for the Zlatoust decorated weapons both in Russia and far beyond its borders. This was vividly demonstrated by numerous exhibitions at home and abroad where the Zlatoust produce received very high awards.

The work of Zlatoust craftsmen from the last quarter of the nineteenth century shows a recourse to subject compositions on blades. A prominent place is held by compositions in which the text plays the dominant role. The concise but expressive inscription, besides its direct function, also serves as a decorative feature.
The productions of Zlatoust craftsmen, being part of the artistic heritage of the past, continue to command attention as ever before. Their perfection, beauty and originality give joy and pleasure of a very high aesthetic order.