The Ethnographical Museum of the Peoples of the USSR
Peasant art is characterized by a great decorative power, elegance of colour, structural simplicity and ornamental ingenuity. The Ethnographical Museum of the Peoples of the USSR is the central museum of its kind in the Soviet Union, a veritable treasury of folk culture and art.
The collections of this richest repository provide an illuminating insight into various epochs: they include articles characteristic of the period of the disintegration of primitive communal society collected in North-East Siberia, exhibits illustrating the patriarchal system of some peoples in the Northern Caucasus and Central Asia still retained at the turn of the century and domestic objects used by the Russians, Ukrainians and Baltic and some other peoples during the period of capitalist development. Along with these exhibits the Museum has a vast collection of objects which shed light on the daily life of the peoples of our country in the present period of advanced socialism. 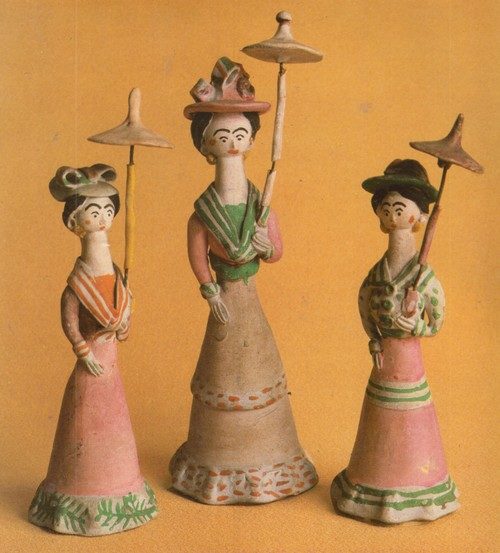 The idea of establishing an ethnographical museum in Russia was evolved by the members of the Russian Geographical Soviety in the middle of the nineteenth century. Their efforts resulted in the foundation in 1848, of the Ethnographical Museum of the Geographical Society with the purpose of showing “the peculiar features of the daily life of the peoples now dwelling on the territory of Russia, as well as the peoples formerly inhabiting it.”

However, for lack of funds and accommodation this project was not realized in a full measure: only half a century later, in 1895, with the establishment of the Russian Museum, was it planned to form within it a separate department devoted to ethnography. The department’s activities began in 1901, though the construction of a building for it, designed by V.Svinyin, started only in the next year. From its inception the ethnographical department was headed by Dmitry Alexandrovich Klements, who was in fact the founder of the future museum. Klements was not only a versatile scholar but also an eminent social figure advocating Populist ideas. His persistence and resolution played a major role in working out the principles and establishing the scope of the central ethnographical institution of Russia.

From the first months of the department’s existence active work on augmenting its collection began. The collecting of materials in situ was combined with the acquisition of rare and valuable exhibits from private individuals and art collectors. The first expedition sponsored by the department was undertaken by S. Dudin, who brought from Central Asia about 2,000 exhibits and priceless photographs featuring various aspects of the daily life of the Turkmen, Uzbeks and Tajiks. Now this photographic collection, which amounts to some 1,800 prints and negatives, has become really unique. Dudin’s photographs have laid the basis for the photographic holdings of the Ethnographical Museum of the Peoples of the USSR, which now contain over 150,000 items. These include the rarest photographs of the late nineteenth and early twentieth centuries, which illustrate the life and economy of most of the peoples of Russia in that period.

From the beginning of the twentieth century, the collecting of material on the site became difficult owing to the spread of interest in the products of handicrafts. The department’s curator E.Liatsky complained in 1904 to Klements that the collecting of exhibits was entailed with large difficulties, “for byers-up of handiworks sneak about everywhere.”

In 1902 there were only three men on the staff of the ethnographical department, so exhibits were collected with the help of local intelligentsia, art lovers and connoisseurs. Considerable contributions to the Museum’s collections were made by many eminent ethnologists, archaeologists and art scholars, such as D. Zelenin, S.Rudenko, I.Smirnov and A.Miller, and some foreign scholars such as J.Sirelius and K.Erben. The extensive accumulation of ethnographical exhibits continued up to 1914. The materials arrived from various regions of Russia, from the Ukraine, the Caucasus and Siberia, as well as from Finland, Poland and Czechoslovakia. It was in this decade that the nucleus of the ethnographical collection was formed.

However, not all aspects of everyday life were equally represented: festive costumes with gay decoration apparently persisted. When assembling the ethnographical material, brightly coloured or carved objects were generally preferred, while articles connected with the productive activities of man and simple household utensils were usually neglected. Even at that early stage D. Ivanov, one of the most discerning and intelligent collectors, warned Klements: “Your museum will not escape the deficien- ces characteristic of many similar institutions. It will house many objects of luxury and few old everyday things, which link the archaic features of today’s life with the olden times.”

By 1913 the construction of the building intended for the ethnographical department had been completed. Its halls, however, were opened to the general public only in 1923, after the victory of Soviet power, and for this reason June 3,1923, is considered the date of the official inauguration of the ethnohraghical department of the Russian Museum.

In the early 1930s, the Soviet Government paid a great attention to the improvement of museum work: a number of special decrees of the All-Union Central Executive Committee were issued, the problems of the organization, arrangement of collections and policy of museums were widely discussed. These measures were of particular importance for the ethnographical department whose specialization was quite distinct from that of the art departments of the Russian Museum. In 1934 the Russian Museum was reorganized and the department of ethnography became an independent institution under the title of Ethnographical Museum, its main function being to demonstrate the specific features of the everyday life, culture and economy of the large and small peoples inhabiting the Soviet Union.

The 1930s saw the active assortment of the Museum’s holdings and the collecting of up-to-date material. These efforts were interrupted by the War of 1941—45. Already on the third day of the war the order was given to wind up the exhibition and to prepare the collections for evacuation inland, to Novosibirsk. But it was only a small portion of the entire collection that was evacuated; all the rest was hidden in the building’s basements. At the end of 1942 there were only eight staff members in the Museum, but it is to their effort that we owe the preservation of thousands of objects interred under ruins after a bombing. The act of the State Committee on the damage inflicted on the Ethnographical Museum reads that the total sum of the losses amounted to thirty-three million roubles and that 32,242 exhibits and 28,444 photographic negatives perished.

On 5 January 1946 the Council of Ministers of the USSR adopted a decree on the restoration of the Museum, and in 1948 it opened its doors to the public once again. At the same time some 50,000 items of great value were added to its collection, transferred from the former Moscow Museum of the Peoples of the USSR, which had been closed at the beginning of the 1930s. These were mainly the objects shown at the First Ethnographical Exhibition held in Moscow in 1867, objects rare even at that period. Therefore, having received the collection of relatively old exhibits illustrating the early stages in the cultural development of the peoples inhabiting the USSR, the Ethnographical Museum in Leningrad not only enriched its holdings but considerably improved the quality of its collection. That is why it was given a new name, the State Ethnographical Museum of the Peoples of the USSR. Nowadays, the Museum houses over 400,000 authentic objects characteristic of the daily life, clothing, various occupations, economy and folk art of more than 130 nations and nationalities dwelling on the territory of the Soviet Union from the middle of the eighteenth century to the present day.

Vladimir Stasov wrote in 1903 that the ethnographical department promised to become “something really extraordinary”. The words of the eminent critic have come true, and today, more than seventy years later, it will not be an exaggeration to declare that the Ethnographical Museum of the Peoples of the USSR houses real national treasures. Of particular value among them are objects of decorative and applied art produced by unknown craftsmen. Some of these articles were made for purely utilitarian purposes quite recently, seventy or eighty years ago, and yet are now regarded as valuable works of folk art.

Folk art is not only closely linked with the history of a people, its everyday life and work, but it also reflects the people’s aesthetic ideals. The rapid disappearance of traditional domestic objects makes the surviving examples increasingly valuable as relics of the past, for they help us to understand better folk culture in all its variety.
This volume introduces the reader to the materials housed in the Museum. The book presents the best examples illustrating the life and art of the Russians and the aboriginal population of the north-west of Russia, the Volga Basin, the Northern Caucasus and the Soviet Far East, i.e. the peoples inhabiting the Russian Federation. These bright, colourful works executed in a variety of styles reveal the specific age-old traditions of different peoples and regions. While looking at these beautiful objects, the reader will have a glimpse of the magnificent world where everything, from a delicate embroidery to a gaily coloured toy, is striking because of the unusul wealth of imagination, ingenuity and craftsmanship of its creators.

The limited space of the present edition does not allow us to provide a complete picture of all the peculiar features of folk art in the Russian Federation. Therefore the volume includes only those decorative objects which are most characteristic of the peoples’ daily life and which reveal the main trends of work of present-day craftsmen. 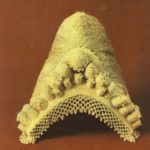 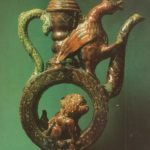 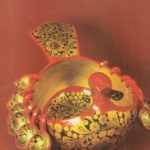 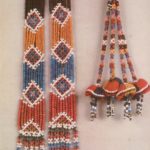 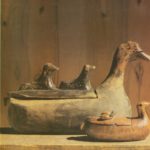 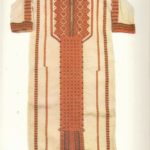 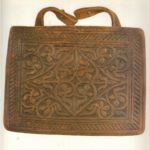 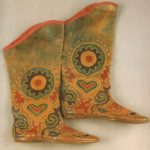 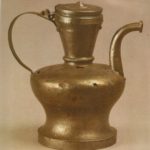 Kumgan (pitcher). Second half of the 19th century Metal, damascening. 29X20X9 cm Ufa province. The Tatars. Col­lected by A. Serzhputovsky 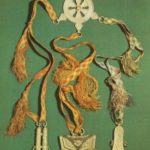 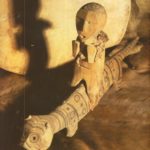 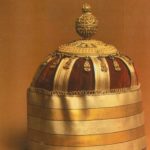 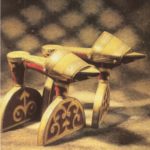 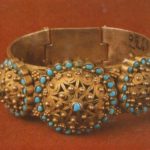 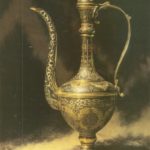