Folk wood-painting is one of the most interesting fields of Russian arts and crafts in the Kama area. Painted wooden articles were found in peasant houses and landlord’s mansions, including furniture, tools, household utensils and means of transportation, such as sledges, carts and river vessels. It was first discovered by the journalist V. I. Nemirovich-Danchenko in the 1870s, and in the 1920s P. S. Bogoslovsky, A. K.Syropyatov and N. Ye.Onchukov, students of the Urals artistic culture, spoke about the great variety of wood-painting in the Kama area. But its real value and establishment of its place in Russian traditional culture was determined in the 1960s owing to the efforts of an expedition of associates of the Institute of the Arts and Crafts Industry led by V. A. Baradulin.

At that time increased interest was shown in the Soviet Union in traditional art legacy, including the Kama area arts and crafts. Expeditions of museums and academic institutes discovered and studied areas of arts and crafts that were unknown before. They gathered material on original wood-painting, thus substantially complementing information on it. Especially effective were studies carried out by an expedition of students of the Gorky State University of Perm headed by the historian G. N. Chagin. As a result, large collections were put on view in 12 Soviet museums, and above all in Perm and Perm Region, demonstrating their original nature. Over 80 painted wooden articles and details of wall painting are now displayed in the Perm State Art Gallery (PSAG). In addition, about 60 articles, including complete sets of interior wall- painting of a peasant house, are on view in the Perm Regional Local Lore Museum (PRLLM) and its branch, the Khokhlovka Architectural-Ethnographic Museum. Displays of collections of painted articles are put on view by the Berezniki Local Lore Museum (BLLM) and the Ussolye Folk Architectural and Ethnographic Museum (UFAEM). A unique collection of locally produced articles is on view in the Ilyinskoe District Local Lore Museum (IDLLM). But the Solikamsk Local Lore Museum (SLLM) is justly proud of the richest collection of them all, including complete sets of interior wall-painting, painted furniture, tools and wooden utensils.
Some of such articles are included in the collections of the largest Soviet museums such as the Leningrad Hermitage and the Leningrad Museum of the Peoples of the USSR Ethnography. The Moscow Museum of Folk Arts and Crafts (MFAC) has a small but valuable collection, including articles that were produced in our days. 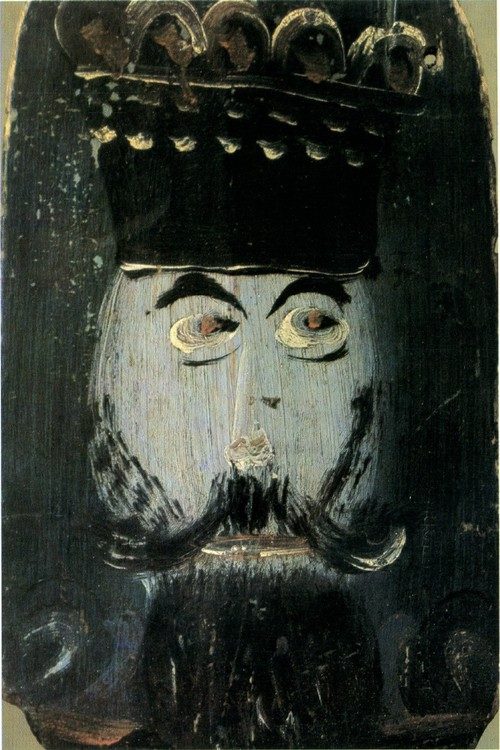 Deep are the roots of Perm wood-painting in the regional artistic culture—its first articles date back to the 17th- the early 18th centuries. At the same time the Kama area’s position, for it lies at the cross-roads of powerful migration currents of Russian population to Siberia, and the constant contacts with the neighbouring Ugro-Finnish peoples had an impact on the development of local painting craft and its emergence as a separate branch of art. It had imbibed old Russian artistic traditions, the decorative trends in wall-painting of the Russian Northern area, the Volga region and Central Russia, and by the mid-19th century had firmly established itself as an individual trend in color composition and design, rhythm and treatment of motives.
Wood-painting was widespread in many of the Kama area centres: in the vicinity of the town of Kungur painted root and sharpened spinners, wooden yokes and carts were produced; in the villages around the town of Okhan painted sledges were produced; cooper’s articles, spinners and toys were painted in villages lying on the Obva river banks. The articles produced in the Obva area are among the best of them all.

Their typical feature is the colorful background contrasting with the painted ornaments.
Each type of craft produced its own wood-painting version. The plant pattern is typical of the Cherdyn area, birds predominate in the wood-painting style of the Solikamsk and Ussolye districts, archaic flower-shaped suns are typical of articles produced in Sivinsk and Vereshchagino districts, and tea-party and wedding scenes are predominant in those produced in Ocher.
The interior wall-painting of houses is quite diversified in the Kama area: in its northern part it tends to be more archaic, whereas in southern and central regions modern trends prevail. Wall-painting is always in harmony with the house’s architectural design. Painted parts of the stove, built-in and other furniture, partitions and doors are always emphasized.

The house of A. I. Brazhnikov from the village of Dubrova, in the Solikamsk district, is a typical example of interior wall-painting in northern peasant houses. The craftsman Ivan Pavlov painted all the wooden parts of the stove and kitchen furniture. We find on the board under the hearth depiction of a hen and a rooster surrounded by flowers, an ancient symbol of the family welfare and the allegorical depiction of the young spouses. There is a tree with three rows of branches with a fairy-tale peacock and an eagle- owl on the top on the stove board. Below the stove board Pavlov left his brief autograph. There is a big multi-petal, rosette looking like a sun placed in the center of a bush painted on the wall of a storeroom. The same flower in combination with two birds is to be found on the kitchen shelf. A lion with an open mouth and a raised paw is painted on the storeroom door. In line with all this are the bright flowers on the door of the cupboard’s lower part. The golden-yellow background is the same everywhere. The well-balanced color scheme, the beautiful fairy-tale plants and birds give the room a festive look full of kind feelings towards the family living in the house.

Owing to the efforts of researchers, art experts, museum staff members and local lore experts, works, formerly considered to be by unknown authors, have been attributed. Now the viewers can admire the exquisite painting manner of Ivan Pavlov, Yakov Zaleshchikov, the painters Pyotr Rusinov and Vasili Patlasov of Kungur, and of Andrei Mokrushin and Vasili Kolchanov.
The rich legacy of Kama area wood painters is a testimony of the everlasting beauty of these works of folk art, for in our days they have lost none of their attraction. In our days folk craftsmen take the best of them for their models with the result that this old folk art has received a new lease of life. 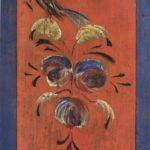 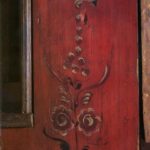 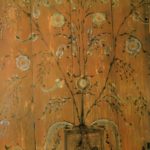 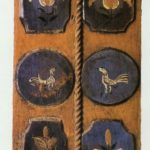 Doors of a built-in closet with cellar. 1915. Alexandrovsky district, the village of Zamelnichnaya. 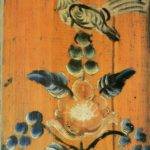 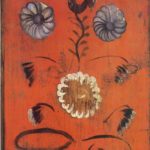 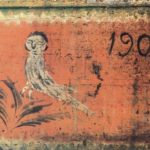 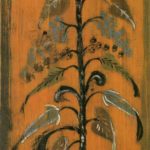 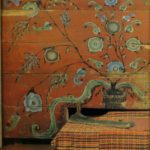 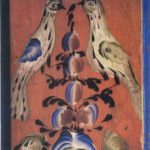 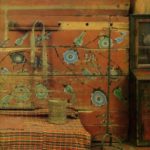 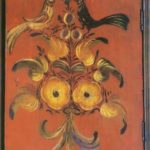