Self-portrait by the river Skuritshali, 1912 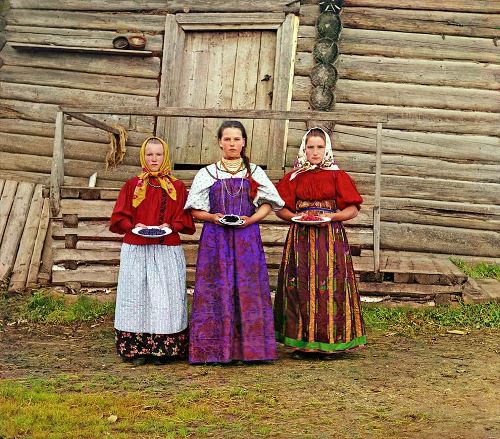 Prokudin-Gorsky was born 30 August 1863 in Murom, Vladimir province. Prior to 1886 he studied at the Alexander Lyceum, but did not finish the full course. From October 1886 to November 1888 he attended lectures on the natural section of the Physics and Mathematics Faculty of St. Petersburg University. From September 1888 to May 1890 was a student of the Imperial Military Medical Academy, from which, for some reason, he did not graduate. He also studied painting at the Academy of Fine Arts. 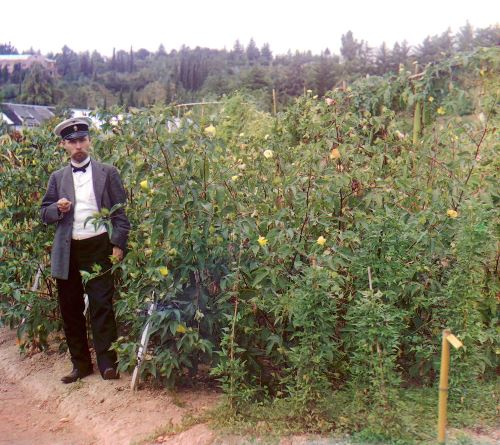 The only unsolved photo portrait made by the photographer

In May 1890 he joined the Demidov house of charity workers, as its full member. It was a social institution for girls from poor families founded in 1830 by the famous patron Anatoly Demidov, and consisted in the Office of Institutions of Empress Maria Feodorovna. 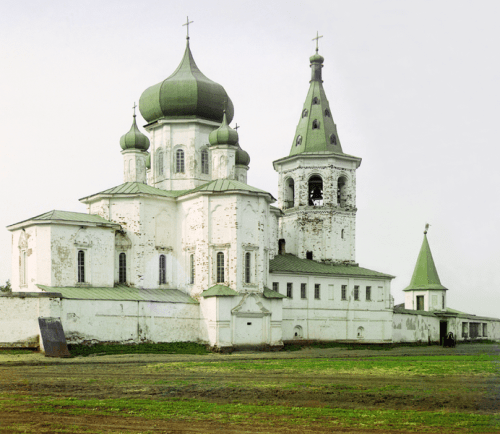 Also in 1890 he married Anna Alexandrovna Lavrova (1870-1937) – the daughter of Russian metallurgist and director of the partnership Gatchina bell, copper and steel mills of Lavrov. Prokudin- Gorsky himself became a director of the board in the company of his father-in-law. 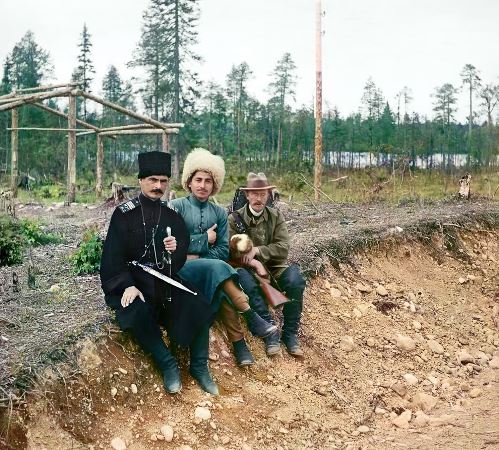 In 1897, Prokudin- Gorsky began to speak on the technical results of his photographic studies at the Imperial Russian Technical Society (IRTS). In 1898, Prokudin- Gorsky was a member of the Fifth Division of the IRTS photographic and spoke on “photographing of shooting stars (stellar rain)”. Already at that time, he was Russia’s prestige in the field of photography, he was entrusted with the organization of courses in practical photography. In 1898, Prokudin- Gorsky published the first book of a series of papers on the technical aspects of photography, “On printing from negatives” and “On photographing with the manual cameras”. In 1900, the Russian Technical Society showed black-and- white photographs of Prokudin -Gorsky at the Paris World Exhibition. 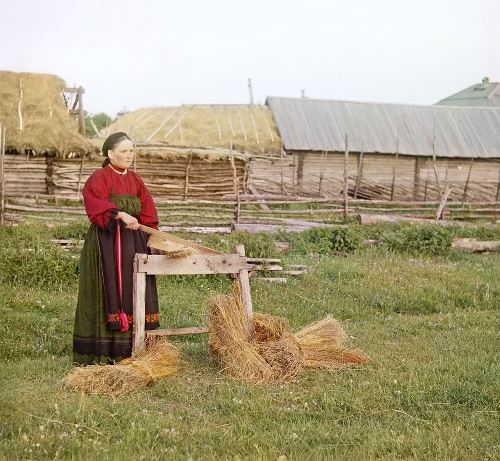 August 2, 1901 in St. Petersburg SM Prokudin -Gorsky opened “graphic photos of zinc and photo-technical workshop”, where in 1906-1909, a laboratory and the editors of the magazine “Amateur Photographer” published a series of technical papers on the principles of color play. 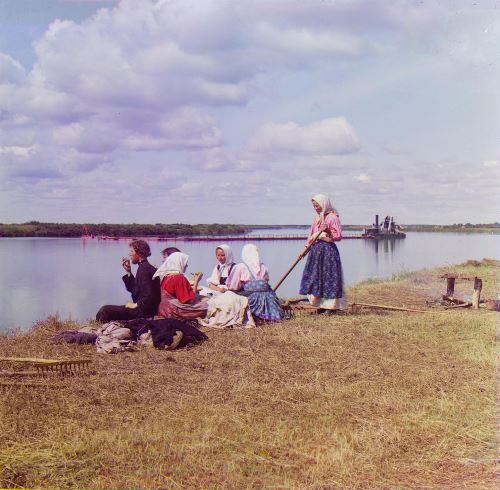 In 1902, Prokudin- Gorsky studied at the School of photo-mechanical in Charlottenburg (near Berlin), under the direction of Dr. Adolf Miethe. At the end of 1902 he set up his model of color camera and a projector to show the color images on the screen. 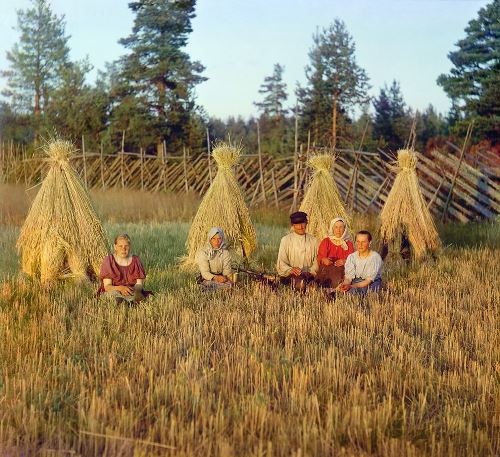 On a haymaking. Vologda Province, 1909

December 13, 1902, Prokudin- Gorsky first announced about the creation of color slides by the method of three-color photos, and in 1905 patented a sensitizer, far superior to similar foreign developments by chemists, including sensitizer ‘Meath’. The composition of the new sensitizer of brom-silver plate was equally sensitive to all the color spectrum. 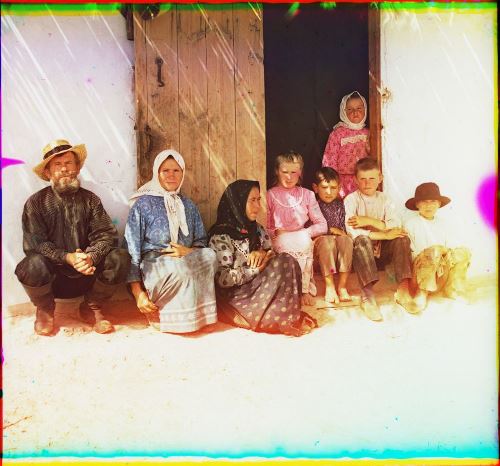 In 1903, Prokudin-Gorsky published a brochure “isochromatic photography with manual cameras”. The exact date of the beginning of color photography by Prokudin- Gorsky in the Russian Empire has not yet been established. The most likely is that the first series of color photographs were made during his visit to Finland in September and October 1903. 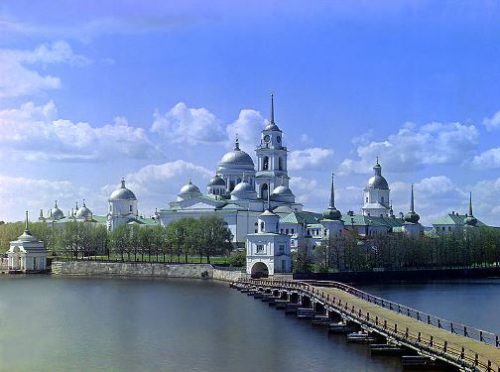 Monastery of St. Nilus on Stolbny Island in Lake Seliger near Ostashkov, ca. 1910

In 1904, Prokudin-Gorsky shot color photographs in Dagestan (April), the Black Sea coast (June) and the Luga district of St. Petersburg Province (December). In April – September 1905 Prokudin- Gorsky made ​​his first big photo trip across the Russian empire, in which he took about 400 color photographs of the Caucasus, the Crimea and Ukraine. All these pictures he planned to publish in the form of photo greeting cards under the agreement with the Community of St. Eugenia. However, due to the political turmoil in the country and the ensuing financial crisis, the agreement was terminated in the same 1905. 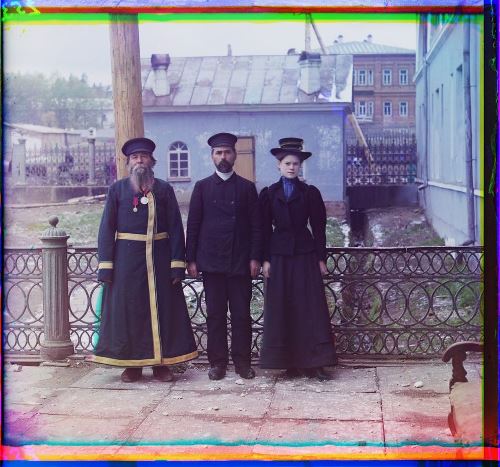 Municipal employee A.P.Kalganov poses for a portrait with his son and granddaughter, the city of Zlatoust

From April to September 1906, Prokudin- Gorsky spent a lot of time in Europe, participating in scientific congresses and photo exhibitions in Rome, Milan, Paris and Berlin. He won a gold medal at the International Exhibition in Antwerp and a medal for “best work” in the field of color photography from the photo club in Nice. 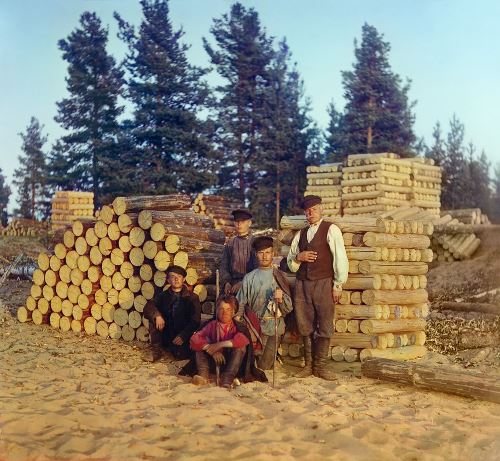 In December 1906, Prokudin- Gorsky first went to Turkestan: to photograph the solar eclipse of January 14, 1907 in the Tien Shan mountains near the station Chernyayevo over Salyuktinsky mines. Although the eclipse was not able to capture due to cloud cover, in January 1907, Prokudin- Gorsky did a lot of color pictures of Samarkand and Bukhara. 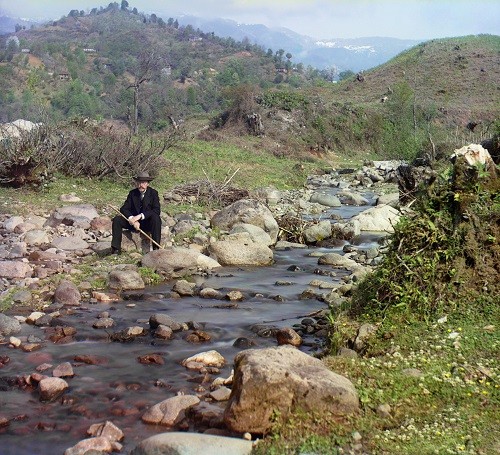 September 21, 1907, Prokudin-Gorsky made a report on studies of Lumiere plates for color photography, after the discussion of the report, had been demonstrated color slides of Ermilova, Schulz, Natomb. 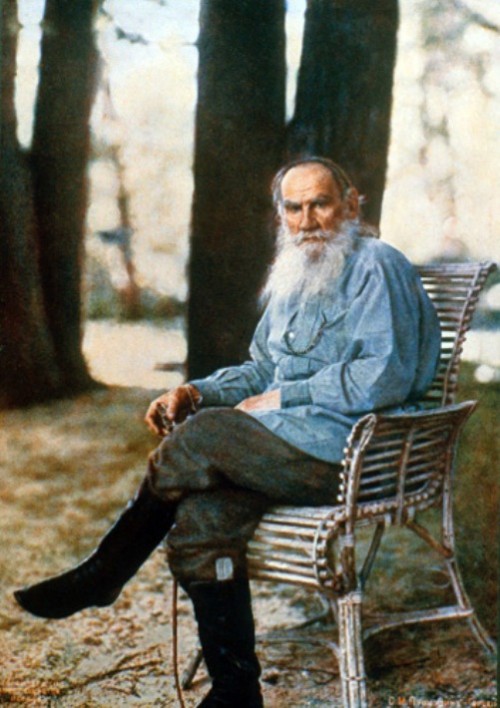 Lithograph print of Leo Tolstoy in front of Prokudin-Gorsky’s camera in Yasnaya Polyana, 1908

In May 1908, Prokudin-Gorsky went to Yasnaya Polyana, where he made a series of pictures (over 15), including several color photographic portraits of Leo Tolstoy. In his notes, Prokudin-Gorsky wrote that the writer “was particularly keenly interested in all the latest discoveries in various fields, as well, and the transfer of images in true color”. In addition, there were two made by ​​Prokudin photo portraits of Fyodor Chaliapin in stage costumes. According to some reports, Prokudin- Gorsky also photographed the members of the royal family, but these pictures have not been found, perhaps, they are lost forever. 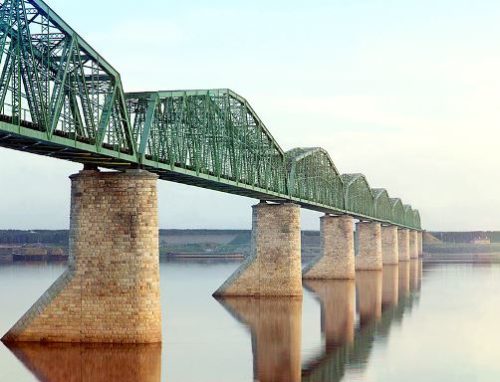 Kama river near Perm (1910). The bridge still stands today, but another similar bridge has been built alongside it. Both are painted white and red.

May 30, 1908 in the halls of the Academy of Fine Arts was screened color projections of photographs taken by Prokudin-Gorsky. His images of ancient vases – Hermitage exhibits – were subsequently used for the restoration of the lost color.

Prokudin-Gorsky gave lectures about his achievements in the field of color photography, using slides, at the Imperial Russian Technical Society, St. Petersburg Photographic Society, and other institutions of the city. At this time, Sergei Mikhailovich conceived an ambitious project: to capture color photographs of his day Russia, its culture, history and modernization. In May 1909 Prokudin-Gorsky had an audience with the Emperor Nicholas II, who commissioned him to photograph all sorts of aspects of life in all areas, then the Russian Empire. To do this, the photographer had been allocated specially equipped railroad car. To work on waterways government has allocated a small boat that could go in shallow water, with the team, and for the river Chusovoi – a motorboat. For the filming of the Urals and the Ural Mountains in Yekaterinburg was given the car “Ford”. Prokudin-Gorsky was given the royal Office documents, which provided access to all places of the empire, and officials were ordered to help Prokudin-Gorsky in his travels. 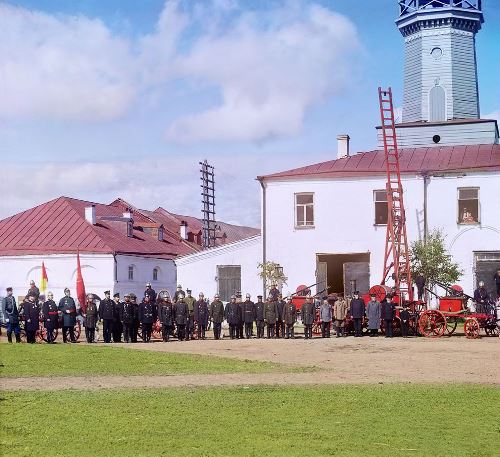 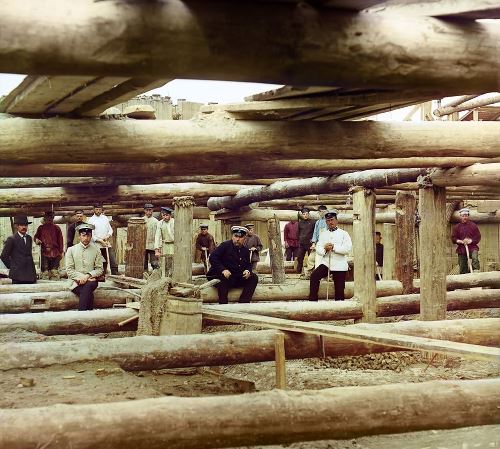 Construction of the dam in Beloomut, Moscow Province, 1912

Soon after the October Revolution in 1917, Prokudin-Gorsky was involved in the creation of the Higher Institute of photography and photographic equipment ( VIFF ), which was formally established by a decree of September 9, 1918, after the departure of Prokudin-Gorsky abroad. The last time his collection of photographs was on display in Russia March 19, 1918 in the Winter Palace. 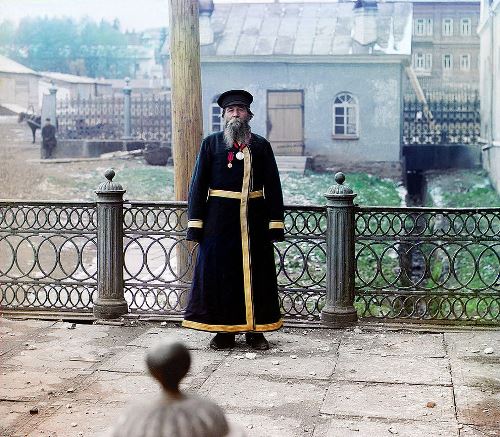 In the years 1920-1922, Prokudin-Gorsky wrote a series of articles for the British Journal of photography and received a patent for a “camera for color cinematography”. 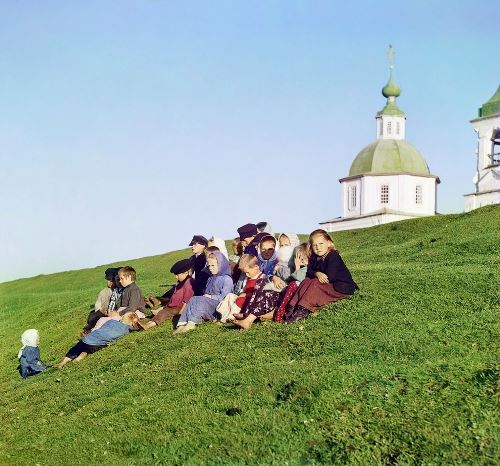 Arriving in 1922 in Nice, Prokudin-Gorsky worked with the Lumiere brothers. Until the mid-1930s, the photographer was engaged in educational activities in France and was even going to make a new series of photographs of artistic monuments of France and its colonies. 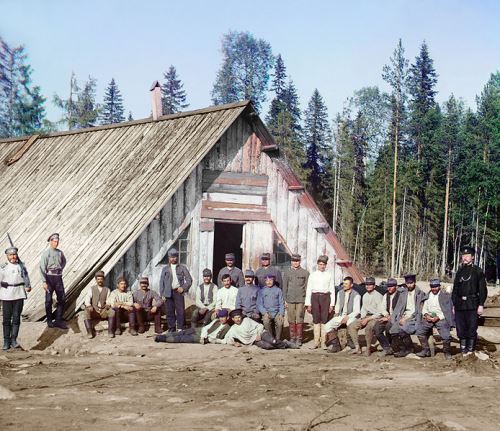 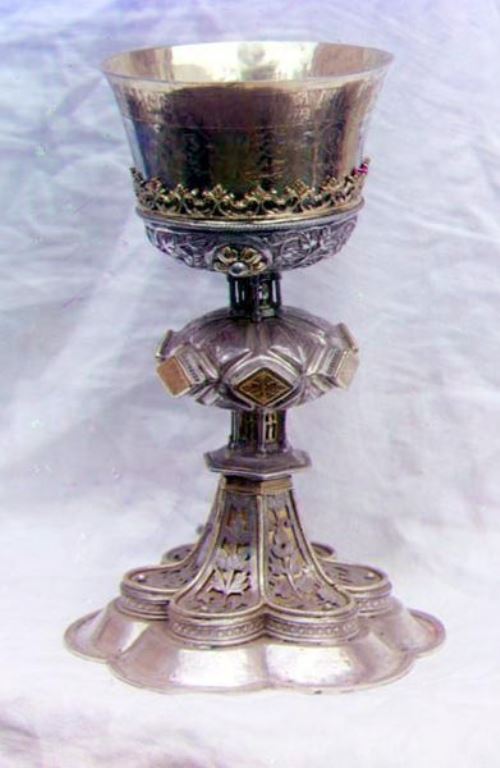 Chalice in the vestry of the Ipatevskii Monastery in Kostroma, 1911 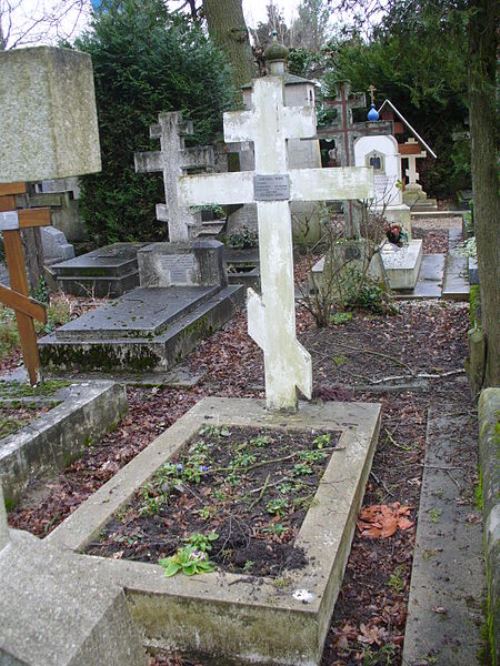 Tomb of SM Prokudin-Gorsky and his wife

Sergei Mikhailovich Prokudin-Gorsky died September 27, 1944 in Paris a few weeks after the city was liberated from the Germans by the Allies. He was buried at the Russian cemetery Saint-Genevieve-des-Bois.