Russian painter Ivan Shishkin
Ivan Shishkin holds a place of honor in the history of Russian art.
Chronologically his work is linked to the period of the flourishing of critical realism in art. And at the time of the emergence of the Russian realist school, he was the only representative of the older generation of landscape artists to finish his creative career in the late nineteenth century. Shishkin had a perfect command of any graphic technique, and his pencil, charcoal and pen drawings are as impeccable as his sheets done by brush. During the 1880s Shishkin arrived at a new understanding of the finished drawing, although he retained the light, dynamic manner of his earlier sketches. In his later period the artist devoted much effort to etchings. These works are notable for their virtuoso execution, striking beauty and conceptual profundity. As a landscape engraver Shishkin had no rivals in Russian art. 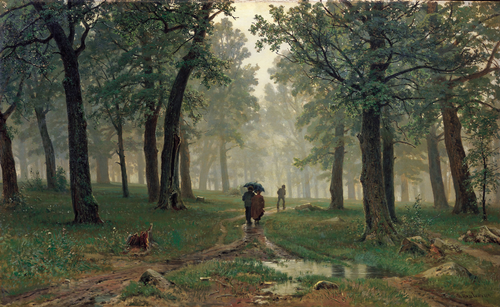 Already in his first independent works Shishkin tended towards a realistically accurate reproduction of nature in all the wealth and variety of its vegetable forms. The painter, however, not merely sought to achieve verisimilitude but tried to reveal the most meaningful and salient features of Russian nature. None of his predecessors had attached such importance to its study.

During the 1870s and especially the 1880s—the period of his creative maturity — the in-depth typification and the epic scope became the distinguishing features of his best canvases. He saw landscape painting as a vehicle for extolling the might and majesty of nature. This concept found a convincing reflection in his portrayal of Russian forests, fields and meadows — images evocative of optimism and pride. His work dovetailed with the aims and purposes of the new school of painting which stood for a democratic art and the assertion of positive ideals. 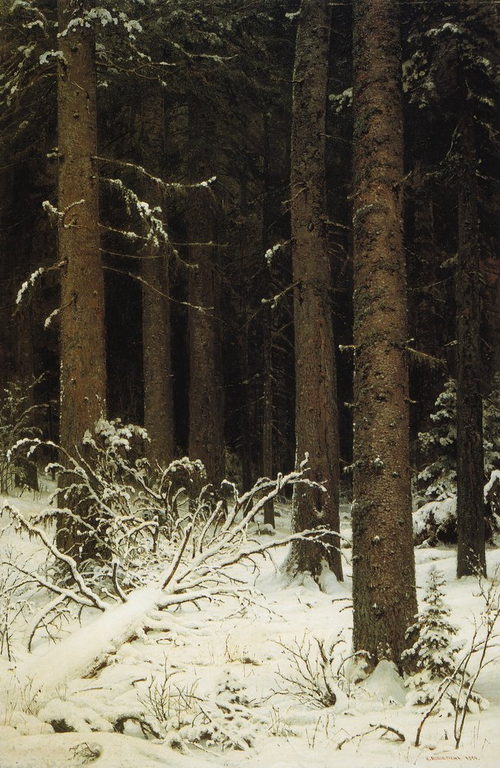 It is worthy of note, however, that the entire youthful experience of Shishkin, his first-hand impressions and those coming from Venetsianov, Mikhail Lebedev and Western European artists, were to become so thoroughly reworked that it is virtually impossible to discern the stamp of some or other influence in Shishkin’s highly original work.

To perfect his skills, Shishkin entered, in 1856, the Academy of Arts. From that time on, his creative biography was closely linked with St Petersburg, where he lived to his dying day. During his training at the Academy, where after the death of Maxim Vorobyov there was no instructor who could teach him anything new, it was nature itself that became his principal instructor. Out there, face to face with nature, he groped for his independent artistic idiom. Nonetheless, the classical-romantic trend of academic landscape, which had taken its definitive form in the 1830s and 1840s, also left a mark on his evolution as an artist. 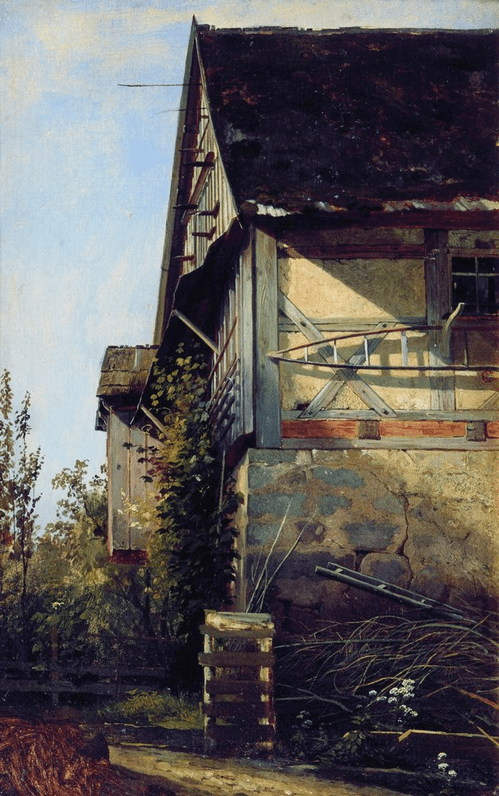 During his training at the Academy Shishkin’s world outlook matured in the conditions of a democratic upsurge which swept the progressive layers of Russian society at the turn of the 1860s. This landscape painter with a brilliant future lying before him, belonged to the circle of the artistic youth brought up on the materialist aesthetics and the new realist literature. These young men challenged the art divorced from contemporary reality and rebelled against the bureacratic routine that reigned at the Academy.

Between 1862 and 1865 Shishkin lived on an Academy grant in Germany and Switzerland. As a result of six months’ work in the studio of Rudolf Koller in Zurich and of his independent intensive efforts, the artist succeeded to markedly improve his professional skills. In the summer of 1864 he painted and drew from nature in the Teutoburg Forest; the rest of the time was spent in Diisseldorf. His foreign landscapes involved certain decorative features and stereotyped compositional schemes. As follows from Shishkin’s letters, he looked on these works with a critical eye, which served as a guarantee for the successful development of his style and manner. The first-hand contacts with foreign artists eventually enabled Shishkin to formulate his own ideological and creative credo — a credo also shaped by his growing criticism of the Academy’s education system. 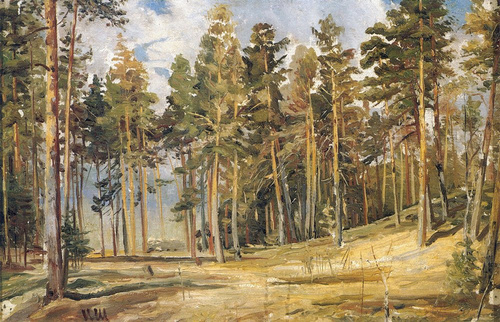 A kind of milestone in Shishkin’s creative biography was his trip to the village of Bratsevo near Moscow, undertaken in 1866. There he executed a study and the picture Midday in the Neighborhood of Moscow (1869), based on it, which marked the beginning of his career as an original, national landscape artist. The merits of his works lie not only in their abundance of light, the masterly portrayal of far-flung fields and the lack of stereotyped compositional devices, but also in his landscapes’ genuinely Russian, poetic flavor and epic majesty.
The 1860s saw the formation of the new, democratic, school of Russian landscape painting. Towards the second half of the decade such artists as Alexei Savrasov, Mikhail Klodt and Lev Kamenev already embarked on the path of the realistic depiction of Russian scenery. It was the same goal that inspired Russian painter Ivan Shishkin.

Affirming this new realistic method, which shattered the foundations of the pseudo-romantic landscape, Shishkin signally contributed to the development of Russian art. 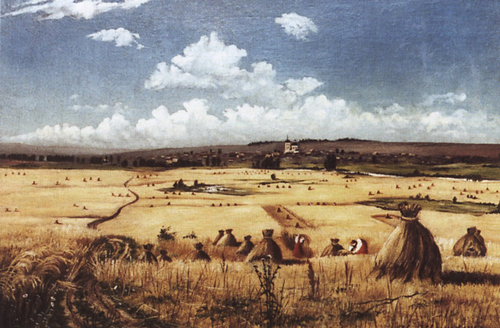 The clear realization of the current artistic tasks, the deeply rooted democratic outlook and the non- acceptance of the academic system eventually brought Shishkin to the milieu of the members of the Society of Traveling Exhibitions. Founded in 1870, this society played an extremely important part in the democratization of art and united, on a common ideological platform, most of the country’s leading artists. Shishkin became one of the most persistent exponents of the Travelers movement in landscape painting.

The 1870s were an important and fruitful period in his career, during which he painted a number of significant canvases and a host of superb studies. At the same time the artist widely experimented with etching. He set great store by the gravure printing technique which allowed him to draw easily, without effort, and to preserve the free and lively manner of line drawing. Stylistically similar to his paintings, the artist’s brilliant prints are strikingly expressive and subtle in execution. 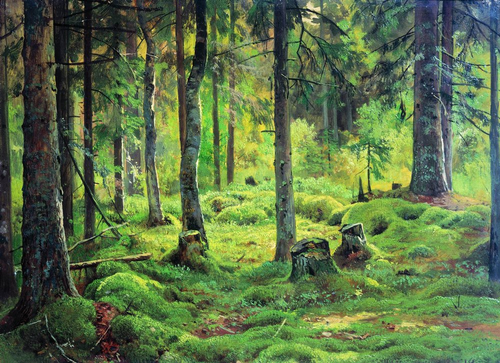 In some of his works Shishkin attains high poetic generalization while retaining his characteristic, loving approach to detail. This is well illustrated by his Rye (1878), a life-asserting picture consonant with sentiments of the people who associate the might and wealth of nature with the ‘happiness and contentment of human life. This image in a measure develops the motif of the Midday in the Neighborhood of Moscow, although now it is raised to the level of an epic poem about Russia.

Shishkin produced many works, deriving his subject- matter mainly from the life of the Russian forests, meadows and fields. While the key features of his art largely remained unchanged, he continued to work out the creative principles evolved by the late 1870s. His finest landscapes of the period reflected the tendencies typical for the whole of Russian art but he reinterpreted them in a way peculiarly his own. The artist worked with enthusiasm on pictures of grand scope and epic mood. His aspiration to convey different states of nature, to achieve a greater expressiveness of images through the use of pure colors manifested itself as never before. On top of that, the artist also took care of the textural variety of his canvases. 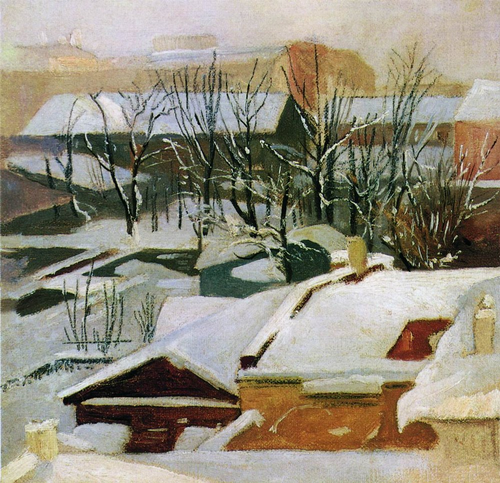 An enormous plastic force combined with a sense of the light-and-air medium characterize his famous canvases Oak Grove and Oaks (both 1887). In 1889 he produced his landscape Morning in a Pine Forest which was to become the most popular in his entire legacy. Like another well-known work, Rain in a Oak Forest (1891), it brings out all the radiant beauty of the Russian scenery.
In the last decade of his life Shishkin continued to work with an amazing creative vigor. The role of light in his landscapes increased significantly, as did his mastery of color, while the perception of nature became more heartfelt, in line with the generally lyrical trend in Russian landscape painting at the time. Yet, resolving the tasks peculiar to the art of his day and further complicating his handwriting, Shishkin remained faithful to his own manner and style, relying on strict drawing, well-defined contours and meticulous rendition of the material world. 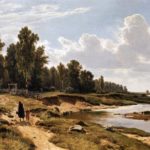 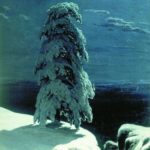 In the wild north. Lone Pine symbolizes the pride and self-esteem, without which man can not climb to the top, the more – to stand on it 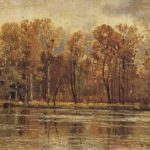 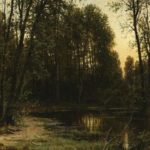 Forest in the evening 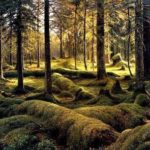 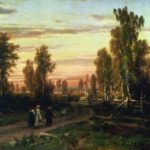 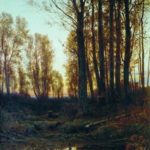 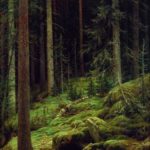 ends of the earth 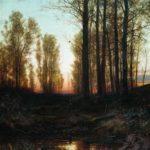 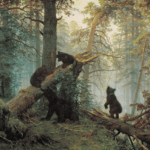 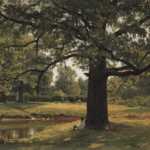 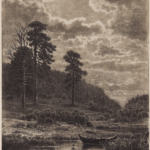 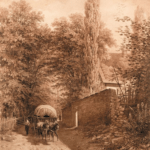 The cabin in the woods. Landscape with wagon. 1863 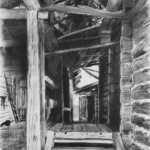 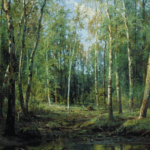