Izmailovo Kremlin Architectural masterpiece
Even 17 years ago on the site of beautiful Kremlin in Izmailovo was an abandoned wasteland. And again on this earth worked skillful craftsmen to build a wonderful castle, domed temple, fairground and rows of carved gates. Thus appeared the famous Kremlin in Izmailovo, created on the basis of architectural motifs in Izmailovo royal residence. It has long been a powerful fortress, and the center of ancient city called Kremlin. Kremlin was the basis of the settlement. In addition, its walls were a barrier for the enemy. During the siege here stayed all the surviving population of the city. Initially, citadels were wooden. But in order to boost their defenses, in the XIII-XIV centuries architects began to erect stone outposts that were immune to fire.

In Russia, there are over 20 historical and cultural complexes, for which firmly established the name “Kremlin”. They are not only fighting fortress with stone walls and towers, but also remarkable architectural complexes with temples, palaces, and of course, houses. Kremlin of Russia – the pride of our Russian land. Kremlin in Izmailovo combines many features of ancient Russian Kremlins of different centuries.

In its walls Izmailovo Kremlin gathers all the best that was in the royal residence. For example, craftsmen and designers have recreated one of the ponds, revived zoo, aviary and stables. And now in the Kremlin live tame pigeons, horses, and a bear. Museums, located on the territory of Kremlin, help make an excursion into the past. Besides, on the territory is a windmill, pottery, weaving and blacksmith shops with the possibility of learning the trade.

Greatness and uniqueness of Izmailovo Kremlin in Moscow

Architectural reminder of the past greatness of the royal patrimony is due to unique location of Kremlin. It is located on a high hill, surrounded by the partially wooden palisade and partly stone walls with massive towers and the bridge. Architects recreated Izmailovo Kremlin from drawings of royal residence of XVI-XVII centuries. For example, white stone tower decorated with colorful tiles, was created according to old technologies and drawings. The architecture of the Palace copied wooden palace of Tsar Alexei Mikhailovich. In addition, various folklore ensembles perform here during the city festivals and fairs. Besides, in the Palace of Happiness take place weddings.

In Izmailovo Kremlin one can not only see the examples of old folk crafts, but also learn the ancient craft. In high school, “Danila-Master” are conducted master classes for painting dolls, pottery, sculpting and coloring Dymkovo toys, rag dolls, weaving, Gzhel painting, etc.
The same way as in the past, in the forging yard professional artists blacksmiths create their amazing masterpieces. Under the guidance of a master can be made small gifts, such as a coin or a real horseshoe.

Izmailovo Vernissage near Kremlin – the largest trade fair of art, folk arts and crafts, souvenirs and antiques. It attracts artists and craftsmen from all regions of Russia. On the opening day presented the world famous crafts and folk crafts: Khokhloma, Gzhel, Fedoskino, Palekh, Kholui, Dymkovo toys and many others.

The spiritual center of the Izmailovo Kremlin is Church of St. Nicholas. The temple was built in 2000 and is a farmstead of Daniel Stauropegial Monastery in Moscow.

Being the tallest wooden church in Russia (46 meters), the Church of St. Nicholas gathers under its roof artisans, merchants and visitors to Izmailovo Kremlin. From the observation platform of the temple is a beautiful view of the Silver-Grape Pond, Silver Island, St. Basil’s Cathedral. 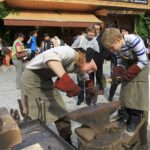 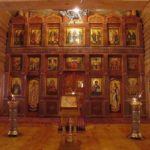 Inside the Church of St. Nicholas 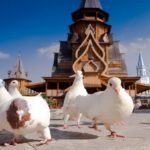 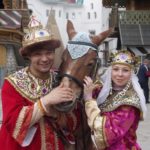 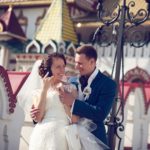 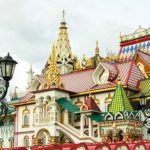 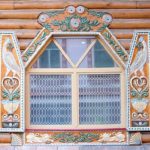 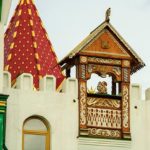 Details of Architecture of Izmailovo Kremlin 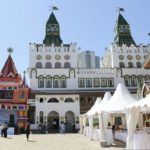 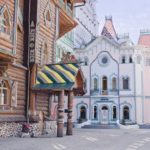 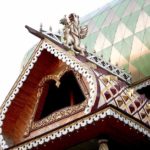 Closeup of some details of architecture of Izmailovo Kremlin 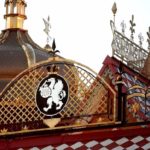 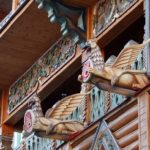 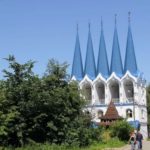 Fragment of architecture of Izmailovo Kremlin 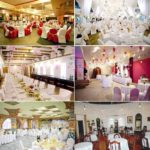 Restaurants in the Kremlin of Izmailovo