Lyubov Orlova is a Soviet theater and film actress, pianist, singer, dancer, People’s Artist of the Soviet Union, born on 11 February 1902. She is a Soviet icon of style. Lyubov Orlova was born into a noble family in Zvenigorod. All life in the questionnaires in the “origin” Orlova wrote: “From the employees.” Her biographers unanimously repeated – the actress was “out of simple intellectual family of employees.” No one could guess that the Soviet film star came out of the ancient noble family of Orlov, whose name is written in gold in the history of the Russian state, and was related to the family of Leo Tolstoy. To anyone who noticed the book at her house with the words “Lyubochka Orlova – Leo Tolstoy”, the actress explained, saying that as a child she read the story of Tolstoy and wrote him a letter, and he responded.

The parents wanted their daughter to become a professional pianist, and when she was seven years old, they gave her to a music school. Little Lyuba was born an alive artistry, she loved to sing and dance. With the girl from the early years teachers were engaged, she took singing lessons and piano. According to family legend, one day Chaliapin saw a performance of Luba, and said the prophetic words: “This girl will be a famous actress!”

Indeed, 25 years later, she appeared in the film “Jolly Fellows”, she became the idol of millions. And before that, in 1919, she entered the Conservatoire, where she studied for three years. Then Lyubov was enrolled at the Moscow Theater College, where she studied dance. In 1926, the young actress Lyubov Orlova worked in Musical Theater named after Nemirovich-Danchenko. For several years she sang in the choir and also took acting classes. Every morning – ballet barre, ice shower, ruthless exercise.

Then she married Andrei Berzin – a major party official, an employee of People’s Commissariat of Agriculture. In 1930, her husband was arrested in the case of Workers and Peasants Party “case Chayanova”. Lyubov Orlova immediately rushed for a divorce – only this move could save her from arrest and camps. Repressed Berzin never recalled former wife of his existence.

Fateful meeting with “her” director occurred in the autumn of 1933. Still working in the theater, Lyubov starred in two films, a portrait of her once or twice flashed on magazine pages. One well-known director, seeing the photo of Orlova, jabbed a finger in her lurking little mole, and said: “On the screen, it will be the size of a bus.”

The real glory to Orlova came after a meeting with the director Grigory Alexandrov (Mormonenko), who became her husband, mentor, friend and protector until the end of days. The director was looking for an actress for the leading role in the new musical comedy, but none of the contenders did not suit Alexandrov. It was only when he saw on the scene talented, brilliant Lyubov Orlova, the director realized – this is it, it’s Annie, his heroine.

“Jolly Fellows” was filmed in Gagra. Alexandrov came to the shooting with his wife and young son Douglas, named in honor of American actor Douglas Fairbanks. (When foreign names go out of style, Alexandrov “renamed” his son to Vasily). Lyubov Orlova, too, was not alone – she was in a company of a diplomat from Austria, a romance, which began in Moscow and all the crew thought he was her husband. However, all of the time off the set Orlova spent with Alexandrov. Austrian left for Moscow and the family of Alexandrov followed him. The director and actress began openly to live together.

“This is a counter-revolutionary film,” – said the Commissar of Education Bubnov, who first viewed the film “Jolly Fellows” and forbade release the film. Writer Maxim Gorky saw the film first and recommended it to Stalin. Stalin laughed a lot and uttered the famous phrase, “As if I was on vacations”. The fate of the film was decided, it was the path to Olympus glory for the actress.

Orlova was the face of the era. She embodied an unattainable ideal of beauty, youth and lightness – the miracle of reality. The dazzling white teeth, white-skinned gorgeous blonde. In psychiatry, even coined the term “syndrome of Orlova” – so was called hysterical ladies obsessive with desire to look like the actress to the last detail. Each new movie strengthened the universal adoration with the actress.

Stalin quickly realized how prestigious is to have a stylish, talented, perfect woman as the star of the national cinema, what a luxury “visit card” can become the actress in the world. On one of the Kremlin’s receptions leader, fatherly glanced at the star murmured sympathetically, “What a little! What a slim! Why is thin? Why pale? “Wanting to laugh it off, Lyubov nodded at Alexandrov:” That’s the culprit, tortured with shootings – neither day nor night … ” Stalin frowned and raised his index finger:” Remember, Comrade Alexandrov! Orlova – our national heritage. Orlova is one. And if you’re going to torture her, we will punish you severely. We’ll hang you, linch, and then shoot the guns”. Shortly after the premiere of “Jolly Fellows” Alexandrov and Orlova were married. For this work Grigory and Lyubov received the Orders.

The well-known theater historian and critic Vitaly Wolf said that Orlova was created by Alexandrov as a model of Marlene Dietrich. Marlene Dietrich – dazzling, relaxed, changes the lovers, who owned the European languages ​​(and Orlova spoke French). Such comparison annoyed Orlova. Marlene Dietrich and Orlova met in America and were photographed together, but Orlova did not like talking about Dietrich.

Each new movie strengthened the universal adoration by the actress. But not everyone admired her. Russian actress Rina Zelyonaya once said about Orlova: “Her face looked unpleasant, untill Alexandrov remade it”. They say Rina Zelyonaya was in love with Alexandrov and was very jealous of his lawful wife.

Faina Ranevskaya, who was a close friend of Orlova said ironically: “Orlova, of course, is a great actress. And it affects the discipline. But here’s the voice … When she sings, it seems as if someone is pissing in an empty bucket. “However, immediately Ranevskaya continued: “To say that Orlova – a good person, it’s like that to admit though Leo Tolstoy – the writer without talent”. Orlova meticulously cared about her appearance, followed the fashion, used all available medical facilities extending youthful skin and body. Later it became almost manic illness. The actress carefully selected light at certain angles – light smoothed wrinkles. Under the guidance of a spouse perfected every gesture and every swing of her eyelashes.

Orlova for many years was the prima ballerina of the Soviet cinema screen, comparing favorably to competing with her actresses with exquisite aristocratic appearance and tidiness. Her first plastic surgery, face lift, Lyubov made ​​in 1946. They say the plastic was paid for by Charlie Chaplin himself.

In 1947, at the International Festival in Venice Orlova shared with Ingrid Bergman Award for “Best Actress of the Year.” Orlova survived her time. She appeared in the company of famous people – George Bernard Shaw, Jean-Paul Sartre, Eduardo De Filippo. And tactless question: “How old are you, tell me honestly” was met by a dazzling smile: “How many years you give”.

A year before her death Lyubov started acting in her latest film, “Starling and Lyre”, where she played the role of 20-year-old girl (she was 72 years old). The film was never released. According to one of the officials of the then State Cinema, Orlova couldn’t hide her age. This, of course, seems to be true. Lyubov too desperately fought against growing old. And she lost. 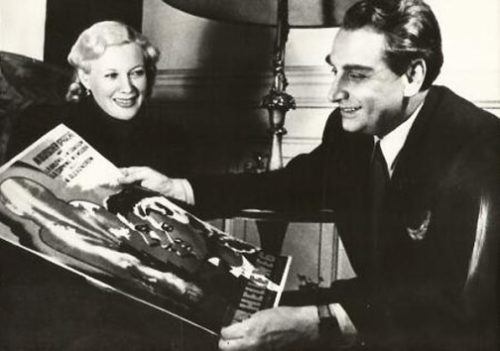 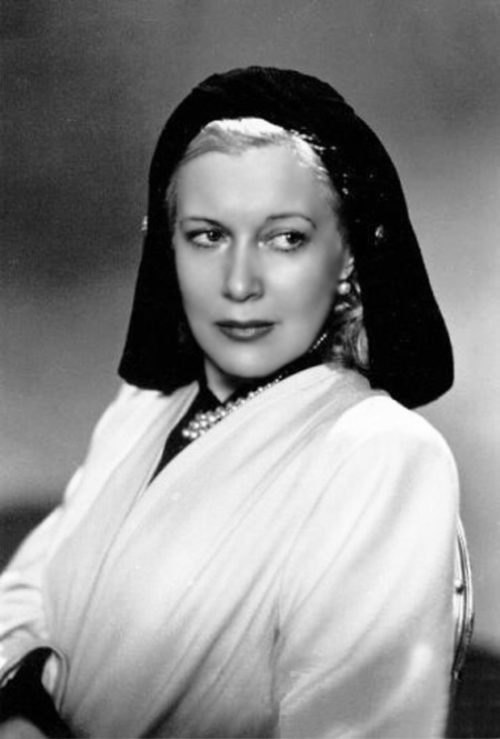 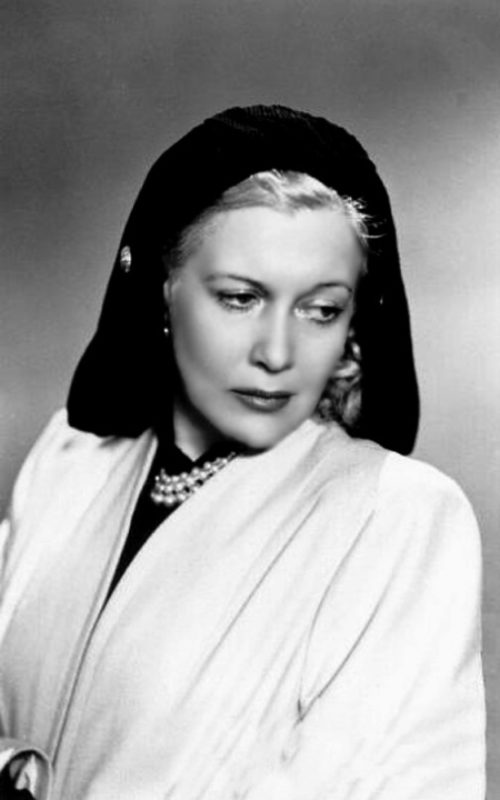 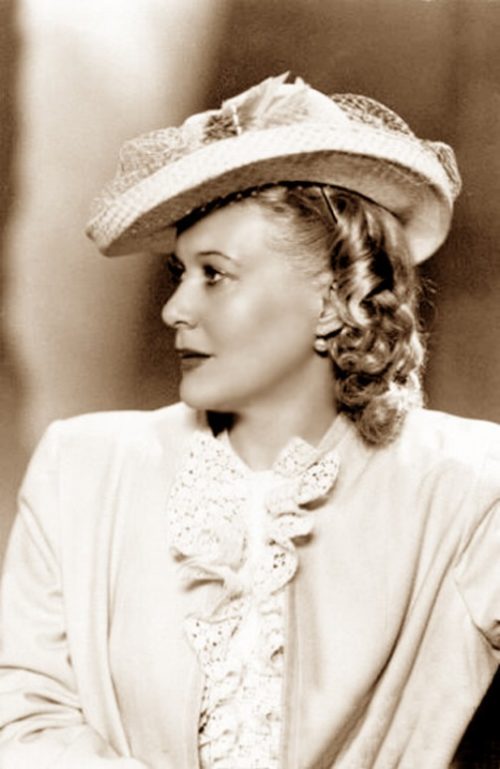 Actress passed away in January 1975, and on her birthday – January 29 – was buried, her coffin sank in the sea of flowers.