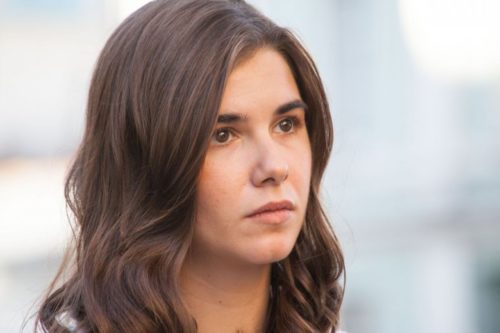 Maria Andreeva is a Russian theater and film actress, best known for her films Nostalgia for the Future, The Book of Masters, DukhLess and the TV series Inheritance.

Mariya Andreeva was born on July 12, 1986 in the city of Kirovograd, Ukraine. After graduation, she decided to connect her career with acting and enter a creative university in Moscow. Andreeva graduated from the Shchepkin Theater School in 2007 and immediately began working in the theater. The young actress worked here for three years, regularly getting the main roles. Together with the beginning of her stage career, she began working in the cinema.

In the year of graduation from the institute, twenty-one-year-old Maria first appeared on the screen, and immediately in the lead role. 2007, the debutante appeared in the form of a selfless girl Anastasia, who abandons her beloved man for the sake of his peace of mind, as she learns about her incurable disease.

In addition, Anastasia helps the main character (played by Andrei Gusev) to revive his ideals of youth. The next year, Andreeva got another major role – a pure and naive girl Rita Prokhorova, one of the heiresses of a huge fortune, in Teymuraz Esadze’s series “Inheritance” (2008). Further, the track record of positive characters of Mary was replenished with Elena from the film about the “dashing” nineties “Perestroika” (2009).

In the same year, the twenty-three-year-old actress got the main role in Vadim Sokolovsky’s fantastic film The Book of Masters, the first Russian project by Walt Disney Pictures. Andreeva again played a beautiful girl with a kind heart – the daughter of the Stone Princess Katya, a sorceress with whom Ivan is in love. A new fairy tale with well-known characters (Baba Yaga, Koshchei the Immortal, Mermaid and many others) turned out to be quite successful. In 2010, Maria moved from the Maly Theater to the collective of the Pyotr Fomenko Workshop.

A resounding success overtook Andreeva at the age of twenty-five, when Roman Prygunov’s film based on the bestseller of the same name “DukhLess” thundered in Russian cinemas. (2011). Maria played a respectable student, revolutionary. And idealistic dreamer Julia, who is desperately struggling with injustice and social inequality in modern society. However, she soon falls in love with a representative of the “enemy camp” – a handsome banker played by Danila Kozlovsky and realizes that there is no truth either in the senseless squandering of the rich, or in the aggressive propaganda of the opposition. The adaptation of Sergei Minaev’s popular book was a massive success and grossed more than $ 14 million at the box office, seven times the production budget.

In the same 2011, Maria played the Russian young lady Marfenka in the film based on Ivan Goncharov’s novel “The Break”. In 2013, the actress appeared as Senior Lieutenant Evgenia Dementieva in the TV series “Fighters”, dedicated to the young heroes of the Great Patriotic War. She also took part in the filming of Yevgeny Shelyakin’s dramatic comedy “ChB” (2013) about destructive xenophobia, when the “face of Caucasian nationality” becomes the guardian angel of a neo-Nazi.

Maria achieved no less success in theatrical activity. She continues to receive leading roles in performances and carefully selects film projects. “In almost all scripts, I am attracted to male characters. Heroines are more often responsible for feelings, heroes for actions. For women, everything is out of focus, for men, everything is clear. Women are cowardly, naive, men are strong and fearless. ” In life, Maria is in many ways similar to her goodies. “The only thing that can make me cry for real is a feeling of injustice”. The actress admits, assuring that she does not like illusions and easily part with unnecessary things and people.