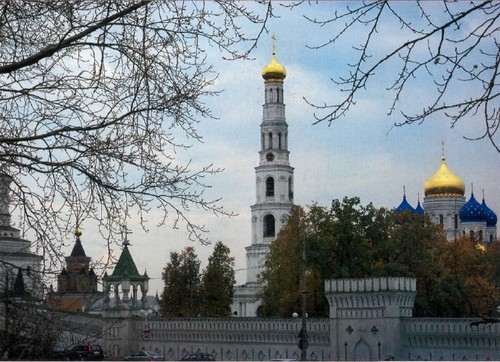 There is a nice place just a few kilometers from the Moscow Ring Road, suitable for a weekend itinerary. Excursions are organized to the Nikolo-Ugreshsky stavropegic monastery in Dzerzhinsky, but you can come on your own. On the territory there is a pond with swans, geese and ducks, a refectory, shops with souvenirs and church utensils. You can stay overnight – there is a hotel.

The monastery is large: several temples, two cathedrals. All buildings were built in different years and even eras. There are also many remakes, but it is not striking, everything is neatly inscribed in the landscape.

An interesting effect when the more than six-century history of the monastery appears in layers: somewhere – by the laying of ancient bricks, somewhere – by a blackened beam.

It is better to come, of course, in the summer. There are a lot of greenery and flowers on the territory. There are benches under the shade of the trees. A quiet place to think about the difficult history of Russia and your own soul.

It is believed that the Nikolo-Ugreshsky monastery was founded by Dmitry Donskoy in 1380 after a fight with Mamai. Why is it “considered”? No written evidence has survived. But according to indirect signs, around the end of the XIV century, the monastery arose. She immediately received a special status: it is known that the grand dukes helped her, the abbots of the monastery became bishops in dioceses important for Moscow. The proximity of the monastery to the Island – the royal amusing village – also affected.

In the Time of Troubles, all the iconic figures of that time stayed here. With the accession to the throne of the Romanovs, a renaissance began at the monastery. The tsar freed the monastery from taxes and actually gave complete freedom before the sovereign’s people.

But in the 18th century, the monastery began to decline. The brethren decreased by four times – to 25 people. The monastery was deprived of benefits in fees and taxes, they began to use it as a prison and a place for the disabled and the insane. The flow of pilgrims dwindled. The remaining monks even began to “indulge” in theft and drunkenness. The question arose about closing the monastery.

But everything changed in 1834, when hegumen Ilarius became the abbot of the Nikolo-Ugreshsky monastery. Within two decades, he was able to revive the former glory of the monastery. On holidays, she began to collect tens of thousands of pilgrims. Wealthy merchant families donated funds for the restoration of churches and assistance to the brethren. The monks built a water supply system, new fortress walls, a hospital, and a fish farm.

In 1918, the new government gave the monastery to the children’s colony of the People’s Commissariat for Finance. Members of the labor commune moved into the former cells. In 1940, St. Nicholas Cathedral was dismantled. At the beginning of World War II, the bell tower was demolished so that it would not be a reference point for German bombers.

The revival of the monastery began in the 90s of the last century.

False Dmitry I fled from the Chudov Monastery in February 1602, out of the wrath of Boris Godunov, right here, to Ugresha.
The monastery was also occupied by the troops of the “Tushino thief” False Dmitry II. In the summer of 1610, he settled in a monastery with Marina Mnishek, with whom he secretly married.

The Nikolo-Ugreshsky monastery, like many monasteries, often served as a prison. In 1666, schismatics were brought here: Archpriest Avvakum, Priest Nikita Pustosvyat and Deacon Fyodor Ivanov. It was not possible to persuade Habakkuk to repentance. Pustosvyat and Ivanov turned out to be more accommodating and wrote letters of repentance. True, they later returned to the Old Believers.

The abbot, who led the monastery after the revolution, Archimandrite Makarii, had an amazing fate. He was born into a family of a priest and planned to become a priest himself, graduated from five classes of seminary, but abruptly changed his life path. Mikhail Yatrov (that was the name of Macarius in the world) became a cadet and entered military service. He retired with the rank of lieutenant and … began to teach the Word of God at the Nikolo-Ugreshsky public school.

Three years later he was tonsured a monk. And in June 1905 he was appointed abbot. It was Father Macarius who bore the brunt of the oppression from the young Soviet regime. He was arrested twice on charges of counter-revolutionary activities. He died of illness in a village near the monastery. In the 2000s, his remains were found and transported to the territory of the monastery.

What to see on the territory of the monastery

North monastery wall
It is called Palestinian or Jerusalem. An architectural monument, it is a symbolic image of Jerusalem in icon-painting style.

Nikolsky and Spaso-Preobrazhensky cathedrals
All parishioners and pilgrims flock here. The first was completely rebuilt in 2004. The second was restored within nine years, inside the temple was painted by Palekh masters.

Temple in honor of the Kazan Icon of the Mother of God
A small but very beautiful five-domed temple. It was built at the end of the 19th century at an almshouse at the expense of benefactors.

Temple in the name of the Monk Pimen Ugreshsky

A small temple on the territory of the monastery cemetery. Built in honor of the abbot, who led the monastery in the second half of the 19th century. The shape of the temple resembles the Church of the Intercession on the Nerl.

Bell tower and temple in the name of the Beheading of St. John the Baptist

The temple is located in the second tier of the bell tower. The iconostasis consists of icons that were returned to the monastery from the funds of the Moscow United Museum-Reserve.

Temple-chapel in the name of the Passion of the Lord
This is a completely new church, until 2002 it never existed on the territory of the Nikolo-Ugreshsky monastery. It is interesting because it was built in the Old Russian style according to the project of one of the monks and perfectly fit into the local landscape.

What shrines are kept

Reliquary cross of the 7th century. The monastery has a sacristy museum. The cross is there. The cross is notable for the fact that there is a small hole in it, where, as it is assumed, a piece of the Tree of the Lord’s Cross was kept in ancient times. Also on the cross there is a part of the schema of St. Sergius of Radonezh, particles of the relics of Euthymius the Great, St. Nil of Stolbensky and the Monk Martyr Theodosia.

The Tikhvin Icon of the Most Holy Theotokos. It was presented to the monastery in 1991 as a blessing of the reviving monastery. Very revered by pilgrims and parishioners.

Icon of the great martyr and healer Panteleimon. It belongs to the nineteenth and twentieth centuries and is located in the Assumption Church. It is highly revered both by the brethren of the monastery and by parishioners and pilgrims.

Spaso-Preobrazhensky Solovetsky Stavropol Monastery Houses and hotels have been built near the Solovetsky Monastery.