Russian Palekh iconography masterpieces
Actually, iconography, as the subject of crafts, closely intertwined with the life of the people, penetrating into the most remote corners of old Russia. Besides, icon in people’s everyday life was not only the object of religious worship, but the “glory” of the house. In addition, iconography contributed to the development of ornamental and decorative art. And Palekh painters brought their skills to high level of jewelry sophistication. Survived to our time Palekh masterpieces are filled with the poetic joy of the peasant artists and love of the subject. Thus, they reflect the basic principles of the Palekh miniature. 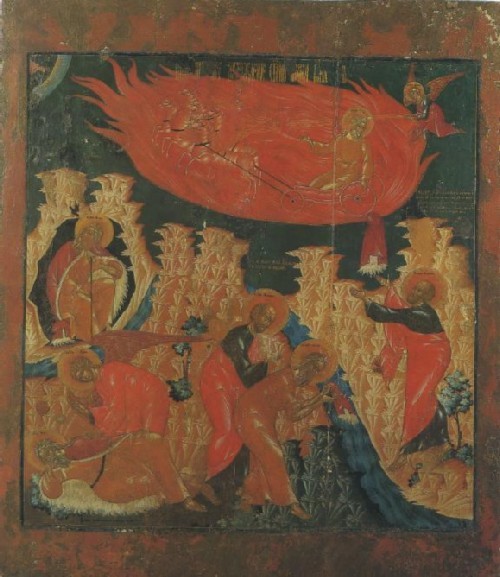 It is noteworthy, folklore traits are strongly evident in the beginning of Palekh iconography of the XVIII century. For example, the painting on a biblical the legend of “the Fiery ascent Of Elijah the prophet”. And to the painting “The fiery whirlwind and golden chariot which took the prophet to heaven”, Palekh icon painter gave an oval shape, depicting the flames in golden contour. Thus, flaming vermilion dominates the composition. Buffy slides turned into bizarre plants. The golden color of Elijah robe, and the blue stream of Jordan – all this creates a joyous, and festive feeling.

Museum of Palekh Art. detail from the icon

Palekh icon painting in XVIII-XIX centuries, despite the dominated secular painting, continued to be a live stream of ancient art. Besides, features of national life, with the interpretation of religious themes resulted in lush and sonorous decoration. In Palekh the lives of saints were available both – at each workshop and individual artists’. Many icons painted by Palekh masters were as stories on the hymns and chants. Thus, song in the beginning of Palekh icon permeates the image, and expresses the feeling, subordinated to narrative. This beginning contributed to the development of painting in elements of folk creativity. Besides, it was a significant feature of the traditions that shaped the art of contemporary Palekh. In the iconography tradition the music beginning acquired formative force. And we note it as an important source of development in the future Palekh miniatures.

The Central image of the Saint in the Palekh icon “Akathist to St. Nicholas” of the mid of the eighteenth century, framed by two large banners. Top – “Every breath praise the Lord “. Bottom – “the transfer of the relics of St. Nicholas”. In the small frames painted scenes of the Saint’s life and the miracles performed by him.

And new Vision of a man of the world leads to a new concept of space. The composition is built on a plane surface. Range plan indicated that the image of architecture inside, a massive reduction of figures. And linear-plane surface structure of the composition determines the color of the icon. Painted in sonorous tones of Golden ochre, bluish-pistachio, raspberry tones. In rhythmical alternation of dark and light are distributed on the plane color spots. And thin web of gaps and gold ornament on top, tightly laid colors make colorful images similar to precious enamel, inserted into gold frames jewelry of the seventeenth century. 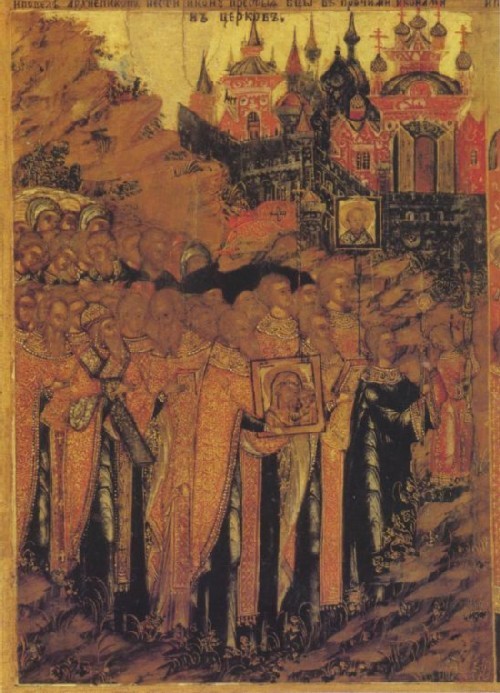 Artists Ivan Bolyakin and Nikita Butorin. Icon The Acathistos in Honour of the Virgin and its border scene 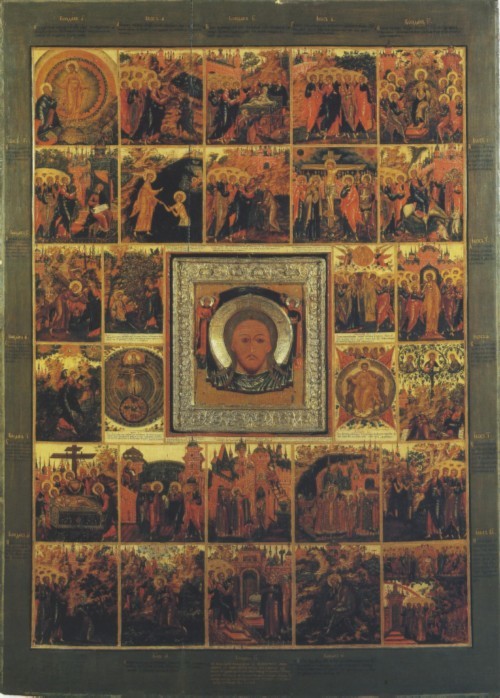 The best of Palekh icons of XVIII – early XIX century include the “Akathist to the Savior,” “Akathist to the mother of God” belonging, according to legend, to Palekh painter Ivan Balakin. He painted the person in the icon, and Nikita Mikhailov Butorin, who performed clothes and interior. In these icons dominate the principle of composition and color balance with a beginning of symmetry.

Ornamental form of trees, prostrate herbs take up so much space in the composition, that it suggests a significant role of landscape in creating the icon image. Patterned grooves forms a thin whitewash and repainting with gold lines makes chamber like palaces created by people’s imagination. In the interpretation of Palekh iconographers, the images of a king and a Queen more likely represent the characters of Russian folk tales. 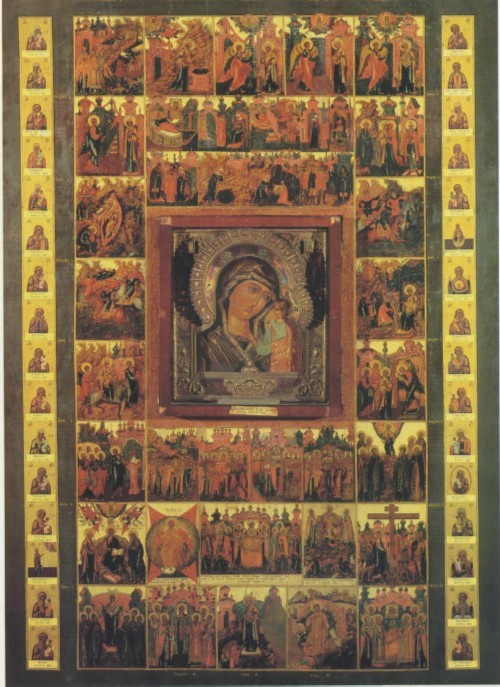 In canonical images of Church Palekh master reinvents respectively the people’s attitude. The style of Palekh painting is distinguished by ornamentalness. Its subject is not only composition, but also the interpretation of the forms – elongated figures, patterned hills, trees, a special grace of birds, beasts, depicted on icons, fine patterned leaves of trees, hills. The linear rhythm of the folds of the clothing is also subordinated to pattern, creating a sense of movement. The flowering pattern of Palekh icon painting was anticipation of new, beautiful feeling forms, mingled with ornamental element in the future of Palekh art miniatures. 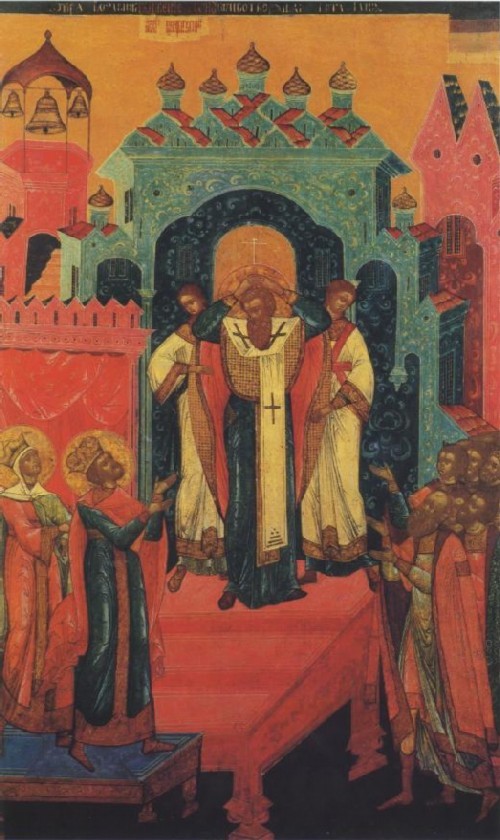 border scenes of the icon 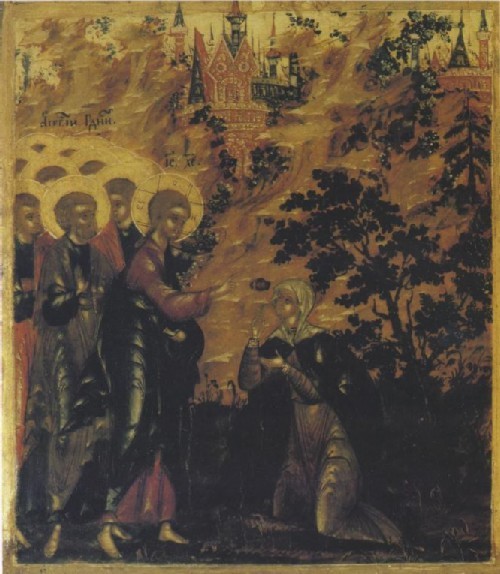