Creamer of tea set tet-a-tet with monogram and coat of arms of Prince NB Yusupov. 1831

Bowl with two handles and a lid covered green and painted gold. Approx. 1830-1831. The painting on the forms Popov factory

Ornamental decor was an important element of Yusupov porcelain. Masters developed and mastered several species of ornamental compositions, which have become a “business card”. Certainly, much of the decorative motifs were gathered from the arsenal of classic art. This is all sorts of variations of the flower and lotus petals, laurel leaves, palmettes, acanthus leaves, vertical hatching, wide and narrow parallel lines, concentric circles, rosettes and shamrocks. Favorite motif was extended border of stylized leaves and lotus flowers resembling bells.

In the archival documents enterprise of Prince Yusupov in different periods was named differently: “picturesque institution” , “porcelain enterprise” “Porcelain Factory”, “porcelain and earthenware factory”. Regardless of the name the main goal of the company was to create artistically decorated porcelain, the best of which were built thanks to the talent of artists to the level of art.

Cup with a portrait of T.B. Potemkina. 1831. Mural on ‘linen’ of Safronov plant. State Museum of Ceramics and Kuskovo XVIII century estate

Cup with the monogram of Empress Maria Fyodorovna and saucer. 1824. Pavlovsk state museum

Large cup with polychrome flowers in baskets under the gilded arches and saucer. 1823. State Museum of Ceramics and Kuskovo XVIII century museum-estate

Objects of tea and coffee set, 1818-1820. The painting ‘a fine bunch’ made on the forms of the French plant Dagoth. ‘Arkhangelskoye’ state museum

Plate ‘View of the square at the hospital in the village of Gruzina’ from the series ‘Gruzina village views’. 1827. ‘Arkhangelskoye’ state museum

Plate with a miniature ‘Apollo and the Sibyl Kum’. 1818-1820. ‘Arkhangelskoye’ state museum

Tea set for six persons with a frieze of garden flowers. 1831. Painting on forms of Popov factory. Museum of Decorative-Applied and Folk Art

View of Arkhangelskoye from south. Painting on a tray from the set tet-a-tet with monogram ‘PNY’ and coat of arms of Prince NB Yusupov. 1831 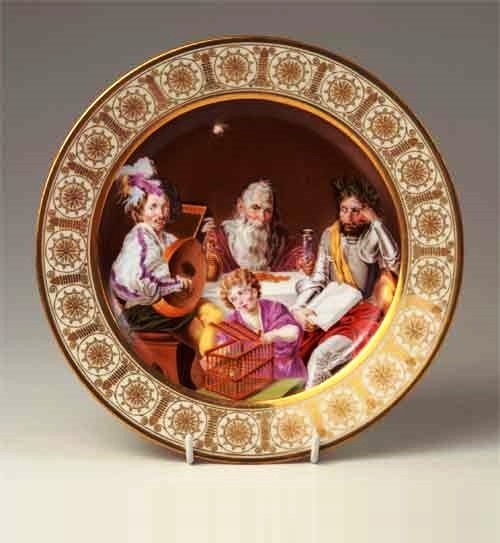 Plate ‘Four ages of man’ with an engraving on the eponymous painting of Valentin de Boulogne. From the series ‘Pictures of the Duke of Orleans’. 1829. ‘Arkhangelskoye’ state museum 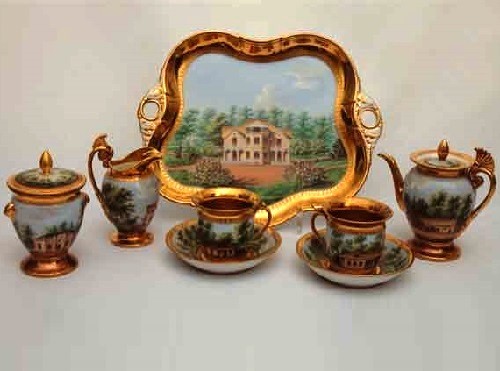 Set tet-a-tet with views of the park ‘Alexandria’ in Peterhof. 1831. Painting on forms of Popov factory. State Museum of Ceramics and Kuskovo Museum-estate of XVIII century