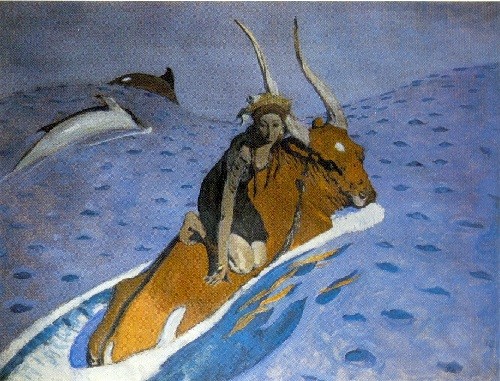 Valentin Serov. The rape of Europa. 1910

Russian artists Wanderers – is the continuation of my previous post The world of art movement. A crucial role in the reshaping of Russian art during the last quarter of the nineteenth century was played by members of the Society of Traveling (or Wandering) Art Exhibitions, i.e. the Wanderers (the s-called Peredvizhniki). Having achieved remarkable results already in the 1870s, the Wanderers reached their peak in the 1880s. Genuine masterpieces appeared at practically each of the traveling exhibitions. At that time Vasily Surikov produced “The Morning of the Execution of the Streltsy”, “Menshikov on Beriozov”, and “The Boyarina Morozova”. Ilya Repin painted his “Religious Procession in the Province of Kursk”, “They did Not Expect Him”, and many of his best portraits. A number of well-known painters also took part in the Society’s activities. 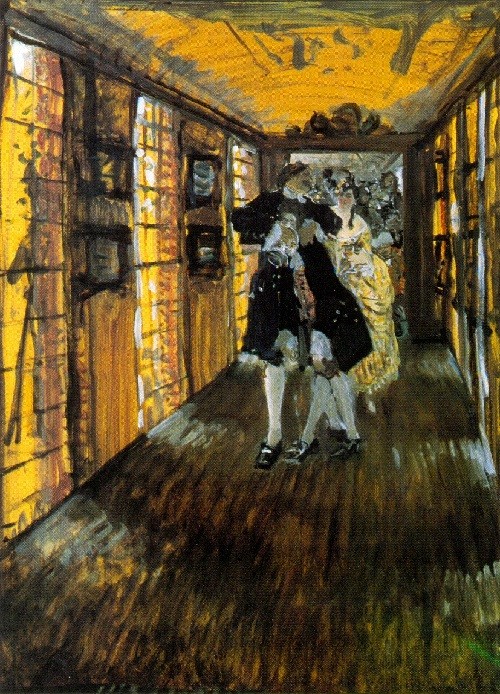 By the 1890s, having discharged their highly creditable social and historical mission of releasing progressive Russian painting from the shackles of the antiquated academic tradition and having developed a consistently realist method, the Wanderers had eventually ceased to be innovative and were about to come full circle. 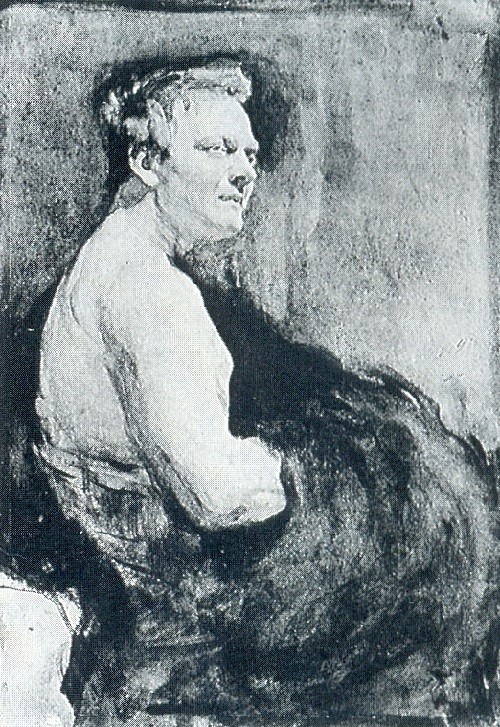 Yet the creative potential that the Wanderers had introduced in their artistic approach was far from exhausted. In the 1890s, several of the younger painters represented at traveling exhibitions displayed superlative talent and signally contributed to the realist trend. One must necessarily mention Sergei Korovin’s “Village Community Meeting” (1893), which was shown at the 22nd Traveling Exhibition, Nikolai Kasatkin’s “Poor People Picking Up Coal” at a Worked-Out Pit and his study, “Woman Miner”, both done in 1894 and displayed at the 23rd Traveling Exhibition, and finally, Sergei Ivanov’s “Study of prisoner life” that figured at the 28th Traveling Exhibition. Each of the artists named built on these pieces to initiate an extensive cycle of paintings. 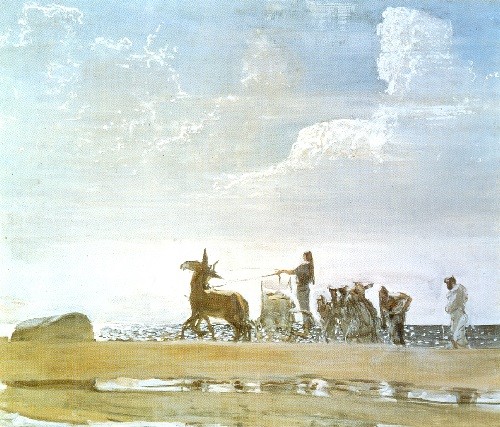 Thus Sergei Korovin dedicated himself to the traditionally Wanderer theme of peasant life, furnishing a probing reflection of the Russian village with its acute social problems after the abolition of serfdom in 1861.
Like Korovin, Sergei Ivanov originally concentrated on the peasant theme. In the 1880s, he produced a series of pictures about migrant peasants who had abandoned their native lands and trekked out top Siberia in search of a better life. Later, in the 1890s, he embarked on a new cycle which portrayed life in prisons, stockades, and on the chain gang. Thematically, this cycle was particularly relevant during the period of reaction under Tsar Alexander III with its surging tide of popular unrest. As Ivanov’s biographers mostly rightly noted, for him this cycle served as a source for that subject matter which was to gain prominence ion his work at the time of the first Russian revolution (1905-1907). 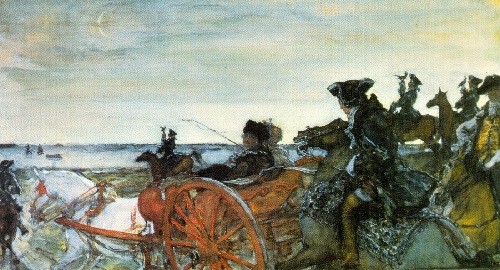 Valentin Serov. Catherine II Setting out to hunt with Falcons. 1902

The art of the Wonderers declined at a very rapid pace. Their later works lacked content, social relevance, and artistic expressiveness. The traveling exhibitions arranged in the 1890s showed hardly anything comparable with the masterpieces of the previous decade. Now the epigones were in command.

Valentin Serov. ‘Soldiers, heroes everyone, where is all your glory’. 1905. Tempera and charcoal on cardboard. Russian Museum, St. Petersburg

In the 1880s, at a time when the Wanderers appeared to hold undivided away, the earliest signs of then barely noticeable revitalization of art were already evident. Mikhail Vrubel, a painter of genius, began his artistic career. Konstantin Korovin displayed his brilliant talents. Novel lyrical intonation sounded in Isaac Levitan’s landscapes and in the pictures of the young Mikhail Nesterov. The twenty-year-old Valentin Serov painted his famous” Girl with peaches” (Vera Mamontova), the first gem in the output of the generation that had arrived to replace the Wanderers and that was to raise the traditions of Russian realist art to new heights. 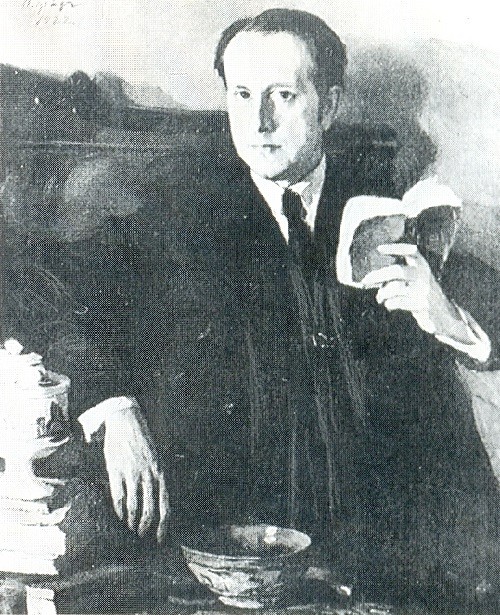 The increasingly complex conditions of the Russian art scene called for a new grouping of forces. One relevant manifestation was the appearance of the Abramtsevo Circle or colony, artists who were drawn together by the well-known Moscow art patron and a social figure Savva Mamontov. They included some of the major Wanderers, such as Ilya Repin, Vasily Polenov, and Victor Vasnetsov, who sympathized with the progressive-minded younger generation, but the dominant role in the circle was played by Konstantin Korovin, Valentin Serov, and Mikhail Vrubel. This young trio was instrumental in forming that creative milieu which largely rid itself of the superannuated Populist dogmas of the latter-day Wanderers. The work of the colony members mirrored certain substantial novel tendencies that were subsequently carried forward in early twentieth-century Russian art. 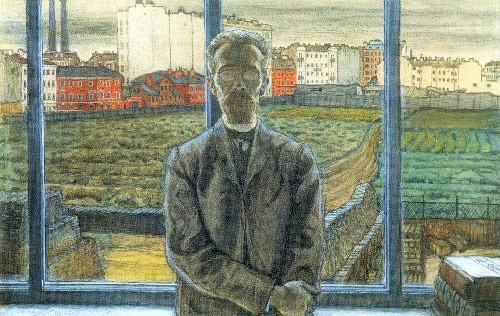 Mstislav Dobuzhinsky. Man with. Portrait of the Art Critic and Poet Konstantin Sunnerberg. 1905-06

In 19885, Savva Mamontov established his private opera company in Moscow, enlisting many prominent artists to work as theatrical designers. This laid the foundation for a new type of stage décor, having nothing in common with traditional stereotypes. Likewise in Abramtsevo, Mamontov organized workshops to revive the techniques and forms of Russian folk arts and srafts. Artists such as Vrubel and Golovin worked there, realizing their innovative concepts. 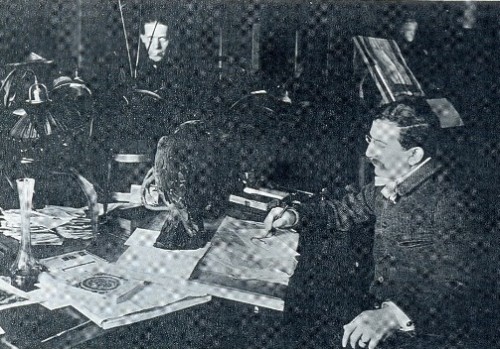 The World of Art group, which gave rise to this forceful influential movement, was formed in St. Petersburg in the early 1890s. Its nucleus consisted of several young students, the former members of the society for Self-Education. This small, select circle was dominated by Alexander Benois, to be framed subsequently as an artist, critic, and historian; Konstantin Somov, an Arts Academy student, a future painter and graphic artist; Dmitry Filosofov, who later developed into a writer; Sergei Diaghilev, a gifted musician, who achieved renown as an art critic and illustrious impresario; and Walter Nouvel, a budding music critic. They were soon joined by the two young artists, Lev Rosenberg, better known by his pseudonym, Leon Bakst, and Evgeny Lanceray. By virtue of their versatile talents and fine cultural standards, the group was soon engaged in extensive social activity that greatly affected the artistic life of the country. 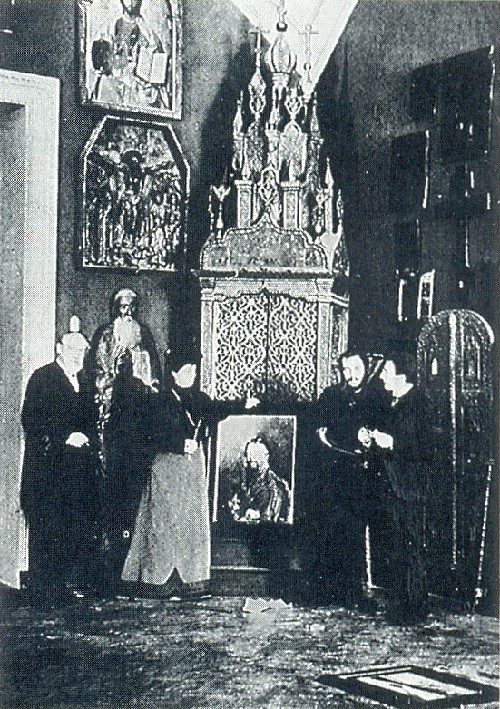 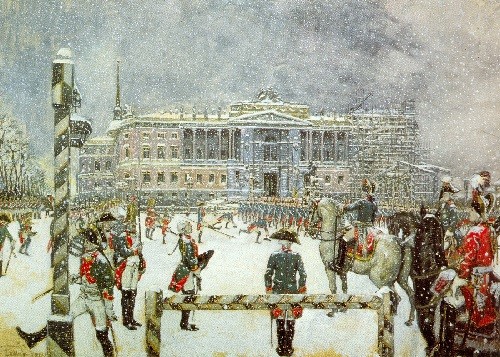 Alexander Benois. Parade in the Reign of Paul I. 1907 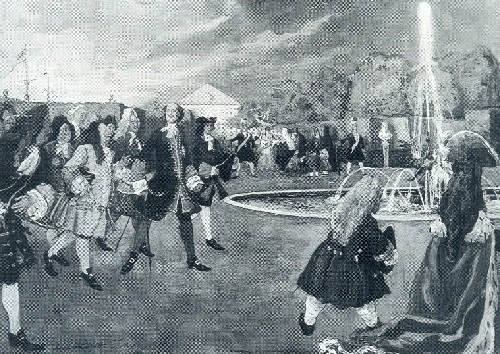 Alexander Benois. Pegter I walking in the Summer Gardens. 1910 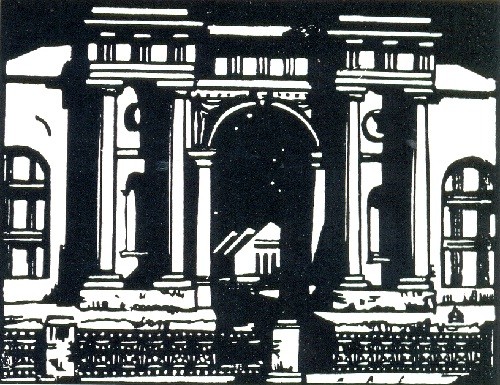 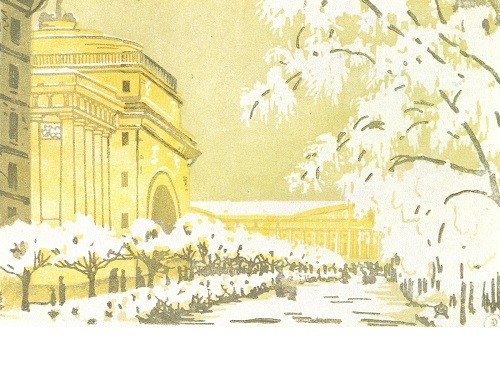 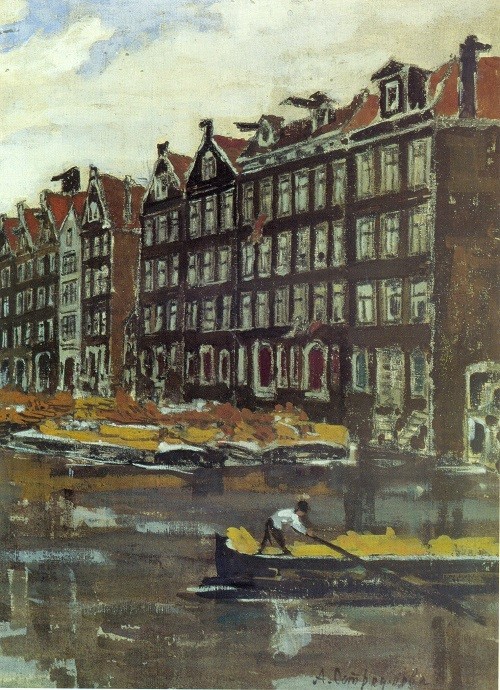 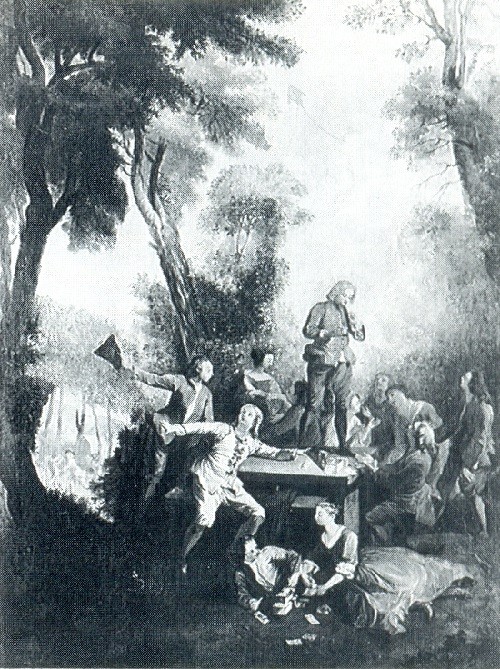 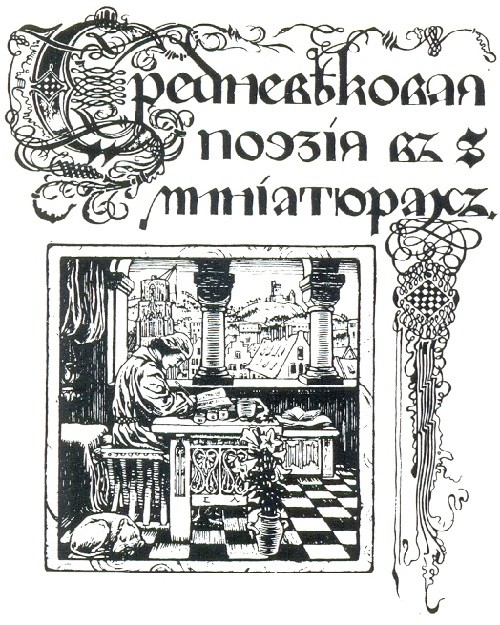 Evgeny Lanceray. Medieval poetry in miniatures. Half title for The World of Art. 1904 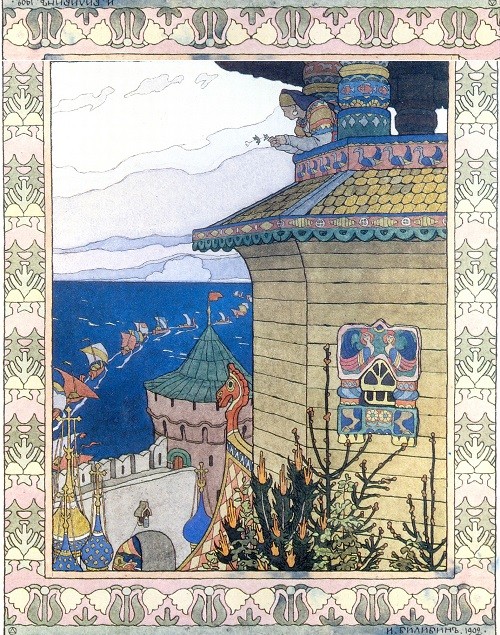 Ivan Bilibin. The Princess in the Tower. Illustration for the fairy tale The Little White Duck. 1902 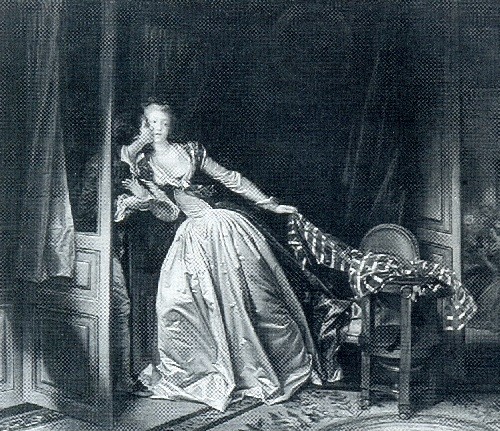 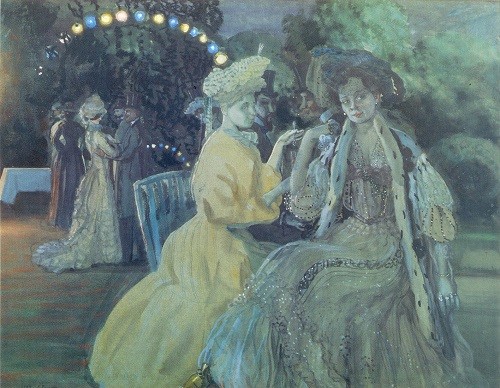 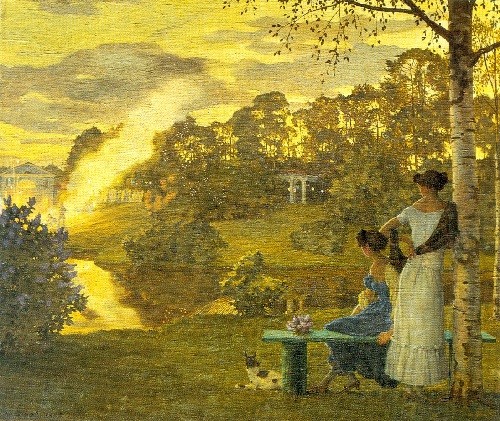 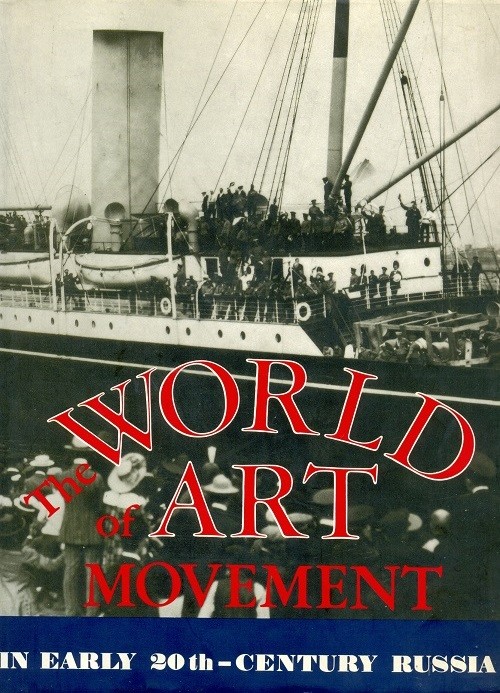