Natalia Goncharova (1881 – 1962) was a brilliant and fruitful representative of Russian avant-garde. The work of the artist was appreciated only in the XXI century. In 2010 her painting ‘Spanish woman’ of 1916, was sold for 6,425,000 pounds. In fact, her paintings today are more expensive than the work of any other female artist in history. Natalia Goncharova is not only the namesake of Alexander Pushkin’s wife, but her great grand-daughter and niece. Great-grandfather of the artist, Sergey Goncharov was a brother of Natalia Goncharova-Pushkina. The childhood of Natalia Goncharova passed in the Tula province, where extensively branched Goncharov family owned numerous estates and villages. But the income from them was very small. By the end of the XIX century Goncharov was a typical example of an impoverished but glorious noble family, whose way of life described Russian classical literature.

Some contemporaries noted Asian roots of Goncharova: Guillaume Apollinaire saw “Kalmyk blood”, and Tsvetaeva concluded: “Goncharova – a clear representative of East Village, from whom she, by the way, has cheekbones.” Marina Tsvetaeva was a neighbor of the artist at Trekhprudny Lane in Moscow and continued to be friends with her in the late 20s in Paris. Tsvetaeva wrote an essay about both famous representatives of an old noble family “Natalia Goncharova.”

In 1901-1909 Goncharova was studying at the Moscow School of Painting, Sculpture and Architecture, where she first visited the studio of Konstantin Korovin. At school Natalia met her future husband, Mikhail Larionov.

Before the revolution, Goncharova was repeatedly accused of immorality. During one of her trials she was successfully defended by a lawyer Mikhail Khodasevich, brother of the poet Vladislav Khodasevich.

Natalia Goncharova and Mikhail Larionov left Russia before the revolution, adopting the suggestion of Sergei Diaghilev to arrange some performances of his famous “Russian Seasons”. Goncharova and Larionov were in Paris on a business trip that turned into exile. In France, the artists stayed until the end of life.

Goncharova and Larionov left Russia in 1915, leaving at home many of their paintings. After the revolution, through the efforts of Nikolai Vinogradov, a fellow student of Larionov, works got in the State Repository of paintings. It was only in the late 1920s, and thanks to the artist Leo Zhegin most of paintings taken from the stretchers, were transferred to Paris.

According to eyewitnesses, Natalia Goncharova worked hard. She held on tight to the principles: “The work can not be given, but only sold”. During the life time only a small part of her work was sold. Goncharova and Larionov lived in France quite modestly.

The work of Russian avant-garde artist Natalia Goncharova became appreciated only in the XXI century. For example, the painting ‘Spanish woman’ 1916, was sold for 6,425,000 pounds in 2010. And her paintings today are more expensive than the work of any other female artist in history.

Goncharova drew the first theater sketches in 1909. She performed sketches of scenery and costumes for the production of ‘The Marriage of Zobeide’ by Hugo von Hofmannsthal, in a private studio of Constantine Kracht.

Natalia Goncharova’s father, a famous architect Sergei Goncharov, defended daughter from attacks of critics. Thus, in 1909, critics attacked the participants of the 2nd exhibition “Salon of the Golden Fleece” with accusations of incompetence. Sergey Goncharov, in an open letter to the newspaper wrote the following: “Can’t you see in these images the living spirit – the spirit of creativity and the spirit of searching, not found yet by anyone?”

In 1914, in Russia arrives a leader of Italian Futurists Marinetti. Avant-garde artists react differently to this event. Goncharova said that Marinetti and Futurism no longer represent contemporary art. However, the same year Goncharova was filmed in “Drama in the cabaret of Futurists number 13.” Unfortunately, the film considered lost, but it was the first reference of cinema to to the avant-garde. It is noteworthy that footage with Goncharova and Larionov preserved.

Goncharova met her future husband, artist Mikhail Larionov, when she was 19 years old. Even after their marriage broke down, they kept close friendships.

There is a beautiful legend that in 1908 Goncharova traveled to Africa. She visited Benin, participated in Madagascar expedition, University of Pennsylvania, and even participated in the excavations. And it was poet Ilya Zdanevich, Goncharova’s first biographer, who created this hoax. He wrote about it under the pseudonym El Eganbyuri. In fact, Goncharova has never been to Africa.

Unlimited imagination and tremendous performance of the artist gave the world hundreds of brilliant works. And even the seriously ill 80-year-old Goncharova continued painting with brush tied to her crippled from rheumatism hand.

Marina Tsvetaeva said about Goncharova “All Goncharova is in two words: the gift and work. Gift of labor. Labor of gift.” In the Tretyakov Gallery was an exhibition of Natalia Goncharova BETWEEN EAST AND WEST in February 16, 2014. The exhibition included about 400 works of 1907-1959. Among them – paintings, sketches for the “Russian Seasons” in Paris, sketches of costumes and fabrics for fashion houses, book illustrations, artifacts from the collection of the Tretyakov Gallery, as well as 23 domestic and foreign museums and private collections. 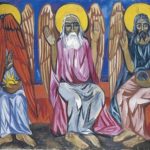 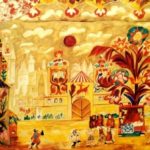 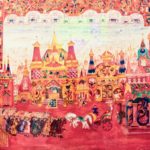 City Square. Set design for the ballet ‘The Golden Cockerel’ 1937. Natalia Goncharova. The City Square. The museum of modern art 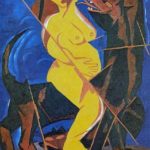 Virgo and the beast, 1911, Kostroma historical and architectural and art museum. From the series ‘The Harvest’ 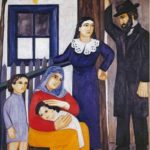 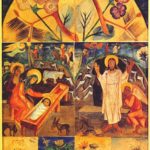 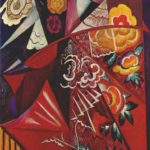 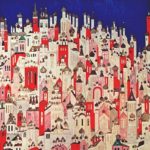 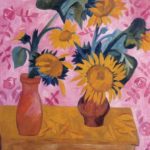 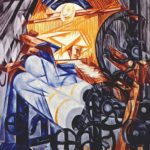 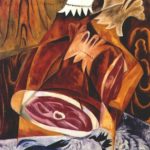 Still life with ham and duck, 1912. Oil on canvas. The State Russian Museum 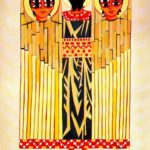 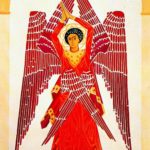 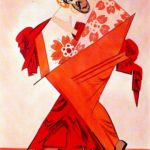 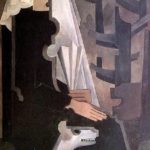 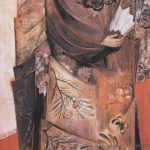 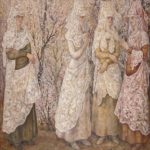