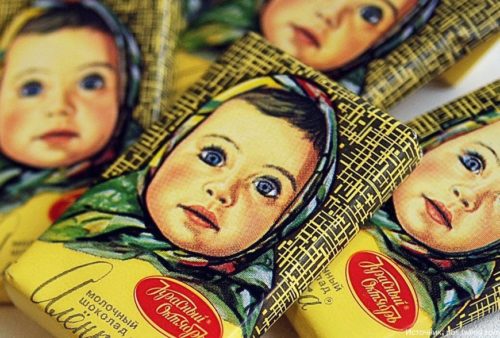 If a person born in the USSR is asked to name the main sweetness of his childhood. Then almost everyone will remember about Alenka chocolate with a cute girl in a scarf on the wrapper. 61 years have passed since the release of the first chocolate bar. During this time, an entire era and even the name of the country have changed. Only one thing remained unchanged – the legendary taste of sweetness and the same girl in a scarf on the package.

The history of the emergence of Russian chocolate Alenka

Alenka chocolate – a real symbol of the Soviet era – appeared in the 60s of the last century. It was then that the Soviet government decided to sweeten the citizens of their difficult working life, curing the shortage of endorphins by launching the production of inexpensive and tasty milk chocolate. Several of the largest factories in the Soviet Union rushed to carry out party orders. The Krasny Oktyabr factory did the best of all: in 1966 they launched Alenka into production. However, the famous blue-eyed girl in a colorful headscarf did not appear on the chocolate label right away.

“Red October” initially released “Alenka” in its traditional memorable design for the holidays (March 8, May 1), and without any image of the girl. Then the factory decided to develop a corporate portrait for packaging popular chocolate. The management of Krasny Oktyabr, together with the newspaper Vechernyaya Moskva, announced a competition for a photograph of a girl who would later become the prototype of the Alenka chocolate. A lot of photographs were sent to the competition, and some of them were used in the design of the chocolate wrapper before the “canonical” image of “Alenka” was approved.

As a result, the photo of Elena Gerinas, daughter of the artist Alexander Mikhailovich Gerinas, who worked at the factory and took part in the design of the wrapper, became the prototype for the label of the Soviet “chocolate icon”. The girl’s trusting soft face with wide eyes and rosy cheeks breathed with contentment and health. Indeed, before appearing on the chocolate wrapper, this photograph graced the cover of the first issue of the magazine “Health” in 1962.

The image of a girl in a scarf on a wrapper

The rosy Alyonka did not immediately become a favorite: from time to time they tried to replace her with a Snow Maiden girl. Or in general they “dressed” her in a coat or in a dress. However, the touching image of a girl in a headscarf defeated all competitors and made Alenka the most recognizable chocolate brand of the Soviet era.

What is the appeal of the image of Alenka? Obviously, a person’s face, photographed in close-up and facing us in frontal view, attracts more attention than other pictorial solutions. Brightness, festivity, laconism of design and prettiness of the model were also, as they say, “evident”. But the main thing is that looking at the Alenka label, the Soviet buyer saw a “portrait” of his inner “child”, whose desires in the Soviet world of universal taboos, prohibitions and obligations remained unsatisfied. The portrait of a satisfied Alyonka for the Soviet worker and office worker was a kind of sign, allowing him to meet his “want”. Pamper himself and buy a product not for food, but for his own pleasure.

The composition of the chocolate

This chocolate is considered to be of high quality and delicious. And all due to the fact that from Soviet times to the present time it has been produced in accordance with strict GOST standards.

100 grams of chocolate contains 9 grams of protein, 34 grams of fat and 54 grams of carbohydrates. The calorie content is 534 calories per 100 grams. Depending on the types of chocolate, these values, as well as the composition, can be changed and supplemented.