The list of World Heritage Sites in Russia consists of 63 objects, I’ve chosen some most beautiful examples of Russian history and architecture. Russian Cultural Heritage – the Kizhi Pogost was included in the list of UNESCO World Heritage in 1993. The historical site of the Kizhi Pogost dates from the 17th century. It is located on Kizhi island on Lake Onega, the Republic of Karelia. The pogost is famous both for the beauty of its wooden architecture, and the fact that it was built without using a single nail.

Historic Centre of St. Petersburg and Related Groups of Monuments were included in the list of World Heritage in 1991. The site was recognised for its unique architecture, which is a mixture of Baroque, Neoclassical and traditional Russian-Byzantine styles. Among 36 most remarkable Groups of Monuments – one of the best preserved – Peterhof fountains and canal. Peterhof is located on the Gulf of Finland near St. Petersburg, was founded in 1710 by Russian Emperor Peter I.

Russian Versailles – a series of palaces and gardens located in Saint Petersburg, Russia, laid out on the orders of Peter the Great. These Palaces and gardens are sometimes referred as the “”. The palace-ensemble along with the city centre is recognised as a UNESCO World Heritage Site.

Spiritual centre of the Russian Orthodox Church – Trinity Lavra of St. Sergius (Sergiyev Posad, Moscow). It is known that 300 monks are living in Trinity Lavra now. The name comes from Russian saint Sergius of Radonezh, who founded the monastery in 1345.

Historical and architectural museum and a natural reserve of the Solovetsky Islands is an object of UNESCO World Heritage Sites , as an outstanding example of design, architectural or technological ensemble or landscape which illustrates a significant period of human history

The historic center of Yaroslavl

The historic center of Yaroslavl was listed as a World Heritage Site by UNESCO in 2005 (5 years before the celebration of the 1000th anniversary of the city) as ‘an outstanding example of urban planning reforms of Catherine II, expanded across Russia in 1763’ 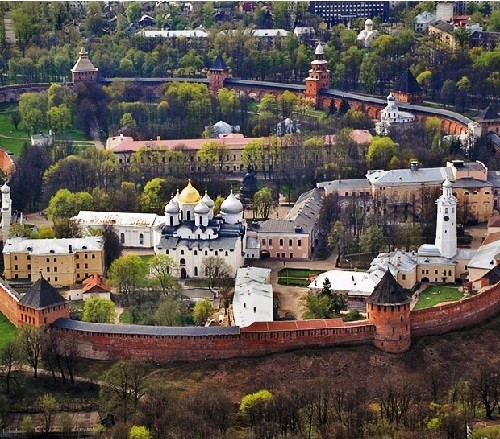 Novgorod was one of the most significant cities of medieval Rus in IX – XV centuries, the center of the Novgorod Republic. From the 12th century, it was a medieval republic, in which decisions were taken by veche – a meeting of the city population – and the prince was elected. Novgorod was not affected by the Mongol invasions. The earliest known Russian manuscripts were produced in Novgorod in the 11th century. Russian whitestone architecture and Russian painting originated from Novgorod and Pskov.

The White Monuments of Vladimir and Suzdal is UNESCO World Heritage Site, with its eight medieval limestone monuments built during the 12th century – Russian Orthodox churches, monastery, and a castle with gate.