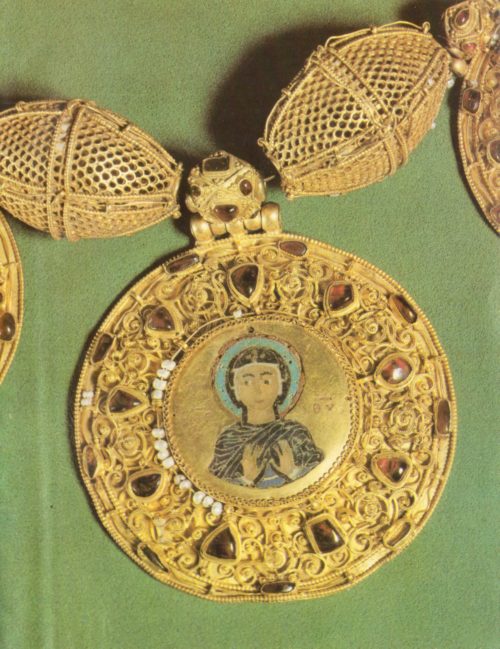 Russian Gold and Silver Articles of the 12th—17th centuries

One of the halls of the Armoury in the Moscow Kremlin has on display a collection of articles made by Russian gold- and silversmiths of the 12th—17th centuries, the artistic and historic value of which can be hardly overestimated. It comprises all sorts of royal and church utensils: gold and silver bowls, loving cups, chalices, crosses, gospels and icons in magnificent covers. This artistic heritage, represents a wide variety of forms, original designs, and complicated techniques, which speak of high standards of craftsmanship of the masters. Most of the objects made of gold, silver, pearls and gems were therefore intended for the elite: the royal family, princes and high clergy. In spite of the the masters who created all those valuables strove to preserve in their works the elements of traditional folk art. This desire of theirs showed itself in the shapes and ways of decorating the objects. Russian jewellers practised various techniques of working precious metals: casting, chasing, repousse, carving, incision, niello, filigree, painted enamel, and made a good use of gems.

There are relatively few monuments that represent the 12th—15th century Russian jewellers’ art. Among them we can find objects made by gold- and silversmiths of Kiev, Vladimir, Suzdal, Novgorod, Ryazan. Peculiar techniques, compositions and ornamental motifs were typical of their art.
A wonderful example of the Ryazan masters’ skill can be given by the articles of the so-called “ryazan treasure”. It was found in 1822 on the territory of the town Staraya (Old) Ryazan destroyed by Tatars in 1237. The treasure is a woman’s decoration for ceremonial wear which consisted of several pieces of different purpose but the same style. Among them there are massive round “kolty”—pendants attached to a headdress, “barmy”—yoke-necklaces, bracelets, rings and ear-rings. The shapes of objects, combination techniques, the colour of the enamels prove that they were made by the 12th century Ryazan craftsmen.
The unity of style shows itself in all the pieces not only in their shape but also ornamentation. Holy images stand out in bright colourful spots against the glittering gold surface of the “kolty” and “barmy”. The smooth metal surface intensifies the enamel portraits, whereas the pearls and a broad edging in filigree stresses their finesse and subtlety. Numerous unfaceted gems in high casts raised above the filigree design add splendour to the “barmy”. Despite the complexity of the filigree ornament and opulence of precious stones, the components of the Ryazan treasure retain the unity of style, colour, shape and pattern.
The progress of art in Ancient Russian principalities was interrupted by the Tatar-Mongolian invasion. The centres of Russian culture were destroyed. After the terrible devastation the country’s cultural life resumed at a very slow pace. 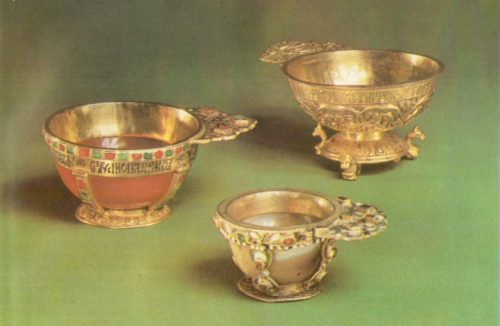 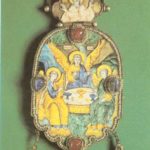 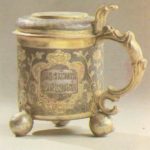 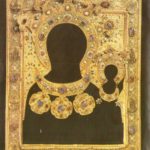 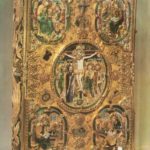 Gospels. Workshops of the Moscow Kremlin. 1678 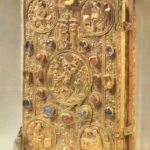 Gospels. Workshops of the Moscow Kremlin. 1571 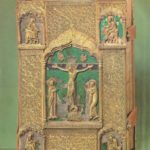 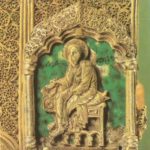 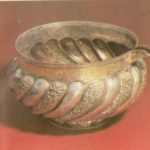 Endova. Workshops of the Moscow Kremlin. 1644 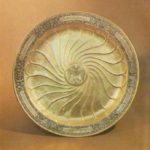 Dish. Workshops of the Moscow Kremlin. 1561 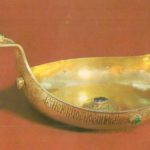 Dipper. Workshops of the Moscow Kremlin. 1624 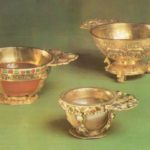 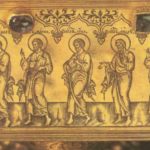 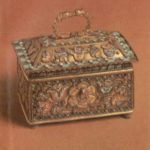 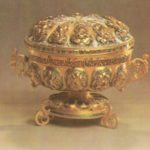 Bowl. Workshops of the Moscow Kremlin. 1694 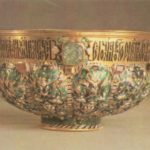 Bowl. Workshops of the Moscow Kremlin. 1653 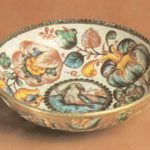 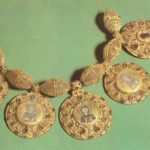 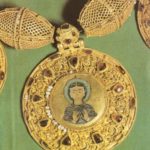