Russian Traditional Folk Clay Toys
The clay toy is a highly original domain of folk art. From the antiquity did it carry into the 20th century the type of minor plastic forms which have retained their own range of colors and their specific assortment of painted and molded-decoration.
The immediate function of play was far from being the only important one for the folk toy. With the exception of some penny-whistles and rattles, the painted clay figurines were intended to be looked at and were meant for amusement. Like china, they were often used in the XIX and XX centuries in every-day life for decorative purpose. According to the opinion of specialists, such an „inner independence from practical aims” inherent in the folk toy was conducive to the liberation of the creative imagination of the craftsmen, permitting them to express in the toys they were making their conception of the world, nature and the people. The images impressing us even to-day are extremely economical in material and in technical devices. 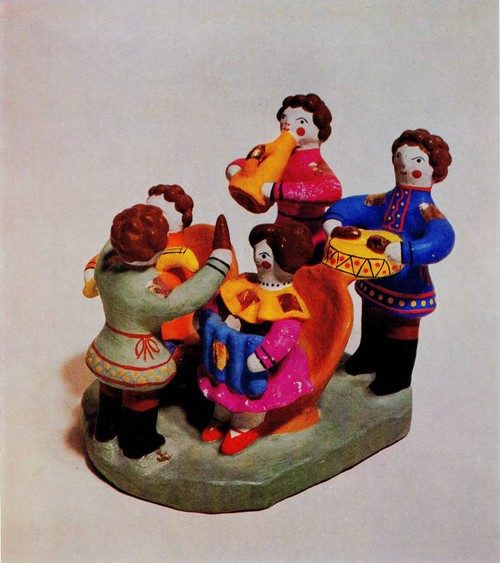 The clay toy is but the most paradoxical phenomenon in the folk art. It is highly conventional, and even limited in the scope of subjects, as well as in the methods of the molding and of the building up of the composition. However, the few favorite subjects are treated with infinite variety not only by each of the many local “schools” of this peculiar art, but also within the local tradition by each individual artist.

The image is not always determined by the time when the toy was created. There are toys of the 1960’s which are made in the style of peasants’ primitive art, and there are toys of the second half of the XlX century showing a much more elaborate approach.
All the Russian clay toys, no matter when they were made, stilistically can be divided into two groups. Some of them have simple and compact form; the image is carried to the utmost degree of generalization, becoming a type, — almost a symbol. The toys of this group are static, their volumes are not opened out, the painted decoration, lacking brightness and made in one or two colors, is of the simplest type. Such are the toys produced in minor towns of Central Russia. 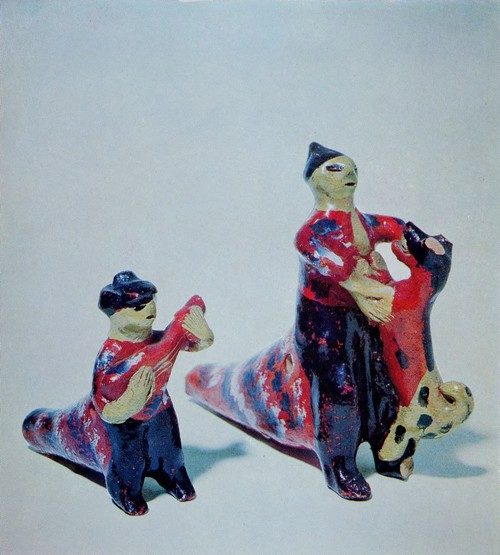 The toys of the other group are much more complicated. They tend to three-dimensional treatment of form and composition; their outlines are elaborate and decorative; a great number of molded ornaments are applied to the body of the toy which itself is treated as a monolithic mass. Images, though remaining a type, become more individualized. The color scheme becomes more sophisticated. In the case of the Tula toys it is based on a range of delicate, subdued shades. The Dymkovo toys are bright and variegated.

The making of clay toys is one of the most ancient arts. Its principles survive in seemingly old forms which, in fact, prove to be always new. Conventional features and images go side by side with keen, sometimes grotesque, characters reflecting the lively observation made in the course of the ages. The keen eye and the boundless fancy of the craftsman helps him to create images of people or animals and birds which are fantastic and plausible at the same time. Each local center of the art of toy-making becomes a world in itself, unique in creating its own range of characters and having its own conception of beauty. 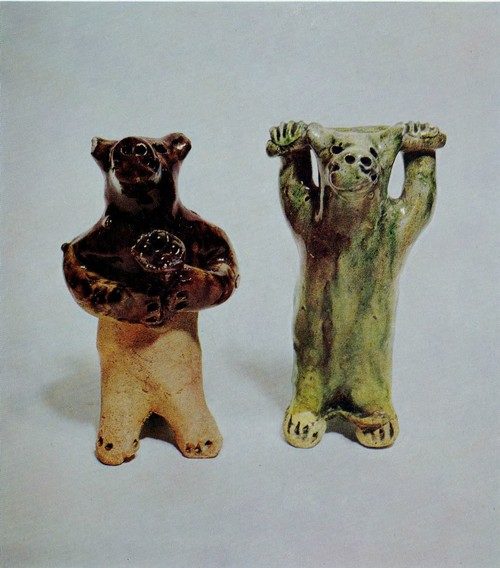 The major part of the toys reproduced in this album were made in the 1930’s — 1960’s. They show that to a certain extent some of the artists adhere to the ancient traditions of the peasant art, whereas the others enrich the art of toy-making with new topics and artistic devices. It is the work of the latter that determines the evolution of the clay toy from a penny-whistle to a special field of minor decorative sculpture, from a primitively glazed object to one freely painted by hand, i. e. to decorative art in the full meaning of the word. The toys made in Abashevo, Zhbannikovo, Kargopol, Filimonovo, Dymkovo share the history and the to-day problems of the applied arts of our country.

Laconic and compact molded form, its concord with the content of the image, the utmost expressiveness of detail, the free imaginative style of the painted decoration — these are some features typical of the clay toy. Elaborated by many generations, these features will always be a sample of genuine craftsmanship. They link the folk toy with the ways of the modern style of the applied arts. That is why the folk toy draws to-day our attention not merely as a museum exhibit. What appeals to us is its artistic content: an aura of poetry about it, the keenness of characters, sharp wit, the feeling of fullness of life. The invariably jolly figurines which might be seen at home and in the museum manifest the vivid ties of the times with the vital forces of the folk art. 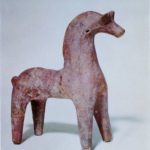 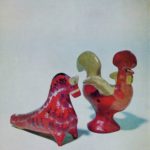 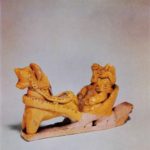 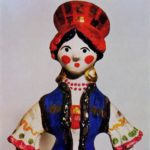 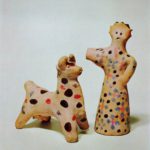 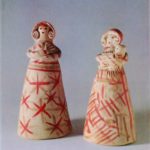 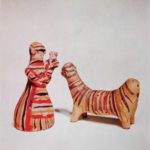 A Woman with a child. 1933. A Pam. 1933. The village of Chernlshino, Kursk region, Kursk district. White clay, painted 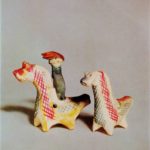 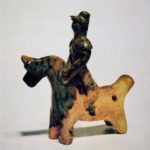 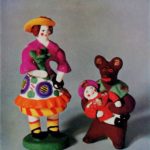