Fragment of frescoes of Snetogorsk monastery of the Nativity of the Virgin. Judgement. Fragment. Bound to devil beast, devouring the head of sinners with the soul of Judas on knees

Snetogorsk monastery XIII century frescoes in the Cathedral of the Nativity of the Virgin is the world cultural monument, located in Pskov, Russia. In this temple preserved the oldest known (1313) frescoes of Pskov school of monumental painting (painting of the Transfiguration Cathedral of Mirozhsky Monastery of XII century. Belong to the Byzantine school). This temple – a very fragile structure. It has a very complicated story, a very difficult life. It was rebuilt many times, safety of frescoes, which are absolutely unique. One of the oldest of the existing monasteries in Pskov, the first mention in the records of the XIII century. Originally the monastery was a male.

Animals from the vision of Daniel and trumpeting angels

On the north wall – a unique iconography vision of the Prophet Daniel, many of the details were widely spread in the Russian art of post-Byzantine period. On the vault are depicted the Ancient of Days of Christ surrounded by angels and lying on thrones open books. The scene is located in front of images of Christ and the Apostles from the Last Judgment. Below are trumpeting angels and the four beasts – symbols of earthly kingdoms. They are all named: Persian, Hellenic, Roman and the Antichrist. To the right of them in the bottom arches was portrayed Daniel himself (the top of the figure is lost, but he is recognizable by his characteristic clothes). To the left on the west wall located a few images associated with the vision of Christ, the Virgin and St. John the Baptist with the angels bearing the instruments of the Passion prophets Zechariah and Isaiah.

Judgement. Fragment. Beasts from the vision of the prophet Daniel

Further, under the vision of Daniel presented the traditional image of the earth and the sea, favoring the dead. Lower contrast images of paradise, located in the same traditional scenes of hell. On the left represented a cautionary parable of Dives and Lazarus (Luke 16:19). The rich man in hell is depicted sitting together with a devil. Satan is depicted on the right on two-headed monster with the soul of Judas in his hands.

Judgement. Fragment. Soul of Judah on the knee of the devil

In Hellfire near Satan’s head were depicted many sinners, all of them were signed by their first names. Most of them correspond to the text of the Life of the New Basil details about the vision of the Last Judgment. Here are the founders of the heresies of Macedonia, North, Arius, Apollinaris, Nestorius, Origen, wicked kings: Diocletian and Julian the Apostate. To them Pskov painters added Herod and Herodias and Salome, Bogomil heretic and murderer of Saints Boris and Gleb – Damned Svjatopolk.

Judgement. Fragment. Beasts from the vision of the prophet Daniel

Assumption of the Virgin

Descent of the Holy Spirit upon the Apostles

Image of paradise. Abraham’s bosom, the repentant thief and the procession of the righteous in paradise

Judgement. Fragment. Bosom of Abraham, and the repentant thief

Judgement. Fragment. Bosom of Abraham, and the repentant thief

Judgement. Fragment. The Apostle Peter with the keys of Paradise

The holy fathers, shown in the lower tier of the walls are preserved on the eastern wall of the lateral branches of the cross on the sides of the altar 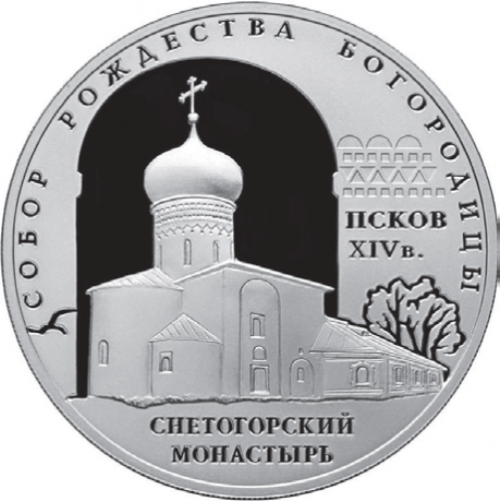 Cathedral of the Nativity of the Virgin. Snetogorsky monastery. Coin of Bank of Russia