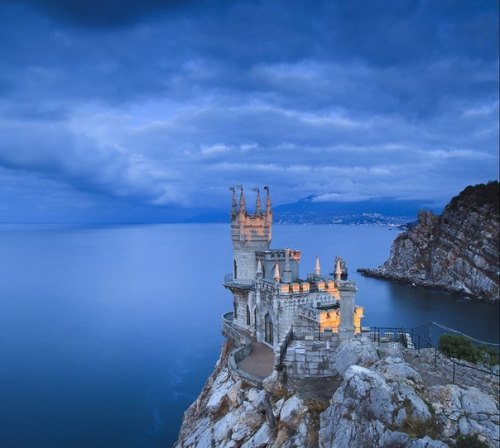 A beautiful view opens from the cliff. You can watch the waves crash on the shore endlessly. Enjoy the warm salty breeze, listen to the cries of seagulls and take pictures one better than the other. The romantic palace-castle “Swallow’s Nest” is located on the steep cliff Aurora in Yalta, Crimea peninsula, Russia. It has been considered a visiting card of the peninsula for many years. It is depicted everywhere: on postcards, in travel guides, advertising brochures.
In 2014, the Central Bank issued a commemorative 10-ruble coin dedicated to the reunification of Crimea with Russia with the image of the Swallow’s Nest. The Swallow’s Nest castle is depicted on the 100 ruble banknote. The banknote has been issued since 2015.

“Swallow’s Nest” is located 40 meters above sea level. In the evenings at sunset, performances and concerts are often given here, master classes by artists and craftsmen are held.

The castle belonged to the Russian oil industrialist Steinheil, who loved to rest in the Crimea. He bought the site in 1911 and commissioned the construction of a medieval-style building. Before that, there was a wooden building here. The palace is small — with an entrance hall, a living room, two bedrooms, next to a beautiful garden.

In 1927, the castle almost collapsed. Due to a strong earthquake, a crack formed in the rock base of the castle. Part of the garden collapsed into the sea, but the building itself was not damaged.

At different times, the palace-castle Swallow’s Nest was abandoned, recognized as an emergency, reconstructed. And for the last 20 years, it has been hosting tourists.

In 1987, the film Ten Little Indians and episodes of the film Mio, my Mio were filmed here.
There is a wish tree next to the castle. Tourists, making each his own cherished, tie a bright ribbon on it.
The “swallow” mail is working. From here, you can send a postcard to any corner of the world.

The territory is small, in an hour you will see the castle from all sides and make a hundred wonderful pictures. For an additional fee, you can go inside the palace. Exhibitions with changing expositions are held in two halls. You will see the finds of archaeologists, the history of the peninsula in old postcards and photos.

If you decide to get to the “Swallow’s Nest” by boat, you will admire the beautiful views of the coast.

Swallow’s Nest at different times of the year

In spring and autumn, when it is already or still warm, there is a lot of sun, and tourists are much less than in the season, you can safely wander around the territory, admire the beautiful views.

There are always a lot of people here in the summer. But the atmosphere is also special, as if you are in the center of the world.

In winter, it is quite unusual here. The snow-dusted peaks of the castle, the railings and steps of the stairs, the restless sea below — a picture from “Game of Thrones”, no different.

Where to take a beautiful photo

Take a few shots from below, before starting up the steps to the palace. If you want to take a photo so that the castle is visible from above, you need to climb a little higher along a special path. Then in the frame there will be the sea and ships sailing along it.

In clear weather the sea is bright blue, contrasting with the whiteness of the “Swallow’s Nest”. Stay until sunset, the palace is very beautiful at dusk. Choose an angle overlooking the city where the lights are on.

It just so happened that it was the village huts that were, are and

Dense coniferous forest in an hour and a half drive from Moscow. It has

The real ancient capital of Russia was not Kiev or Novgorod, but a city

The Tula Kremlin is located in the center of the city of Tula. It