V.D.Polenov (1844—1927) is one of the group of outstanding Russian artists of the late 19th century. Among members of this group we find I. Ye. Repin, V. M. Vasnetsov, V. I. Surikov. They all began their artistic carriers in the seventies of the last century, when painters, together with striving to express civic ideas, were searching for new means of artistic creativeness. Polenov played an important role in this complicated process.
Among his fellow—painters he stood out in an uncommon versatility of his interests. A historical and landscape painter, a genre painter, a theater painter and a prominent architect, Polenov was also a talented musician and composer, a successful amateur actor and director. But the complexity and controversy of Polenov art was not conditioned by these diverse creative abilities alone.

Children Have Been Brought. Sketch of a canvas from the series “Life of Christ”. 1890—1900-s. Vasily Polenov

The artist was greatly influenced by Western ideas, and was therefore accused of “Gallicising”. In spite of this, Polenov created classical images of Russian national landscape. At the same time he was one of the inspirators of the neo—Russian style in architecture. The artist was close to romantic painting; he strongly adhered to academic traditions. In spite of that, he, as well as Vasnetsov, came to Art Nouveau (but by quite a different way), to a new style of art in the late 19th and early 20th centuries. 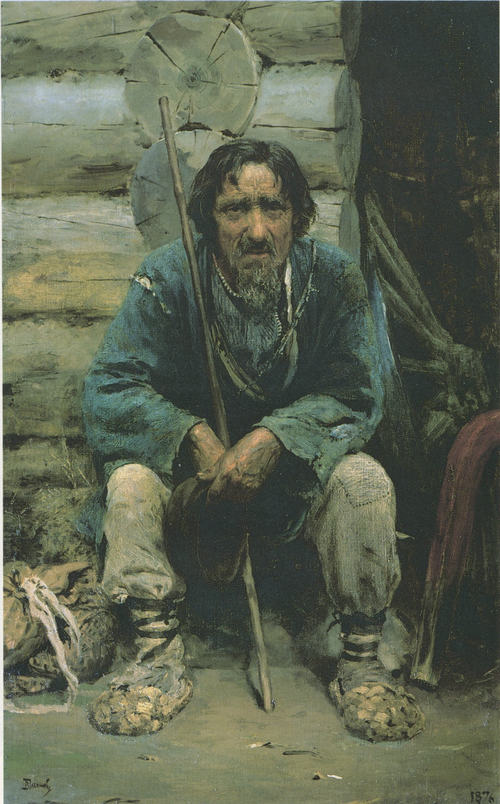 Polenov was born on May 20, (June I), 1844, into a noble family which preserved traditions of Russian intellectual nobility that dated back to the late 18th century.
He got an excellent education, being a student of the Saint Petersburg University and, at the same time, of the Academy of Arts. In 1871, Polenov finishes both institutions. Being awarded, by the Academy of Arts, a big gold medal for his canvas “Resurrection of Jairus’ daughter”, and, together with it, the right for a trip to Europe.

1872—1876 were Polenov’s pensionary years. He travelled through Germany, Italy, and France, where he continued studying and took in all the latest developments of Western European painting. The years in France were particularly fruitful for the artist. There he painted historical canvases — “Master’s Right” (1874) and “A Huguenote’s Arrest” (1875), close in manner to Western academic historical painting (K. Piloti, P. DeLaRoche, G. Gallet). At the same time, Polenov worked much in the open air, solving complex pictorial proplems. A series of plein-air sketches was the result of his work in the North of France, in Normandy. In them we find the sources of fine plein-air colouring of the Polenov’s canvas “A Moscow Backyard” (1878), that was his debut at the Sixth Exhibition of the “Association of the Itinerant Artists”. Having expressed in this canvas a quiet poetic beauty of a patriarchal Moscow nook and everyday life of people that went on there, the artist continued, as it were, the tradition of lyrical landscape initiated by Alexey Savrasov and Fyodor Yasiljev.
The two following Polenov’s canvases, “My Grandmother’s Garden” and “An Overgrown Pond” (both painted in 1879), imbued with romantic mood and elegiac feeling, were distinguished by beautiful painting and novelty of content. They were the first to bring into Russian art themes of aesthetisation of the life of Russian nobility which was becoming a thing of the past. 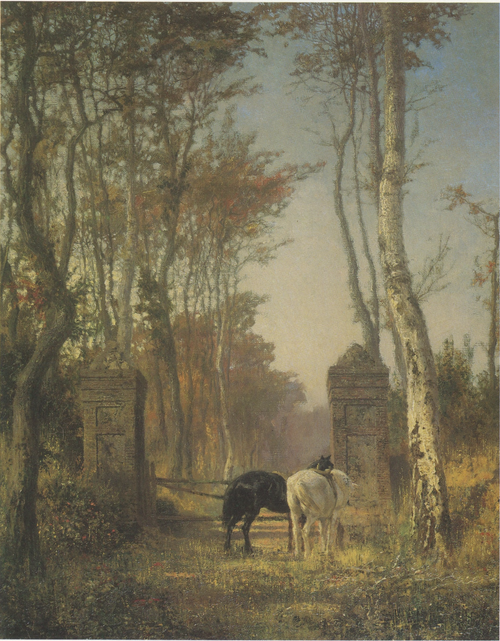 In the Park. The Village of Veules in Normandy. 1874 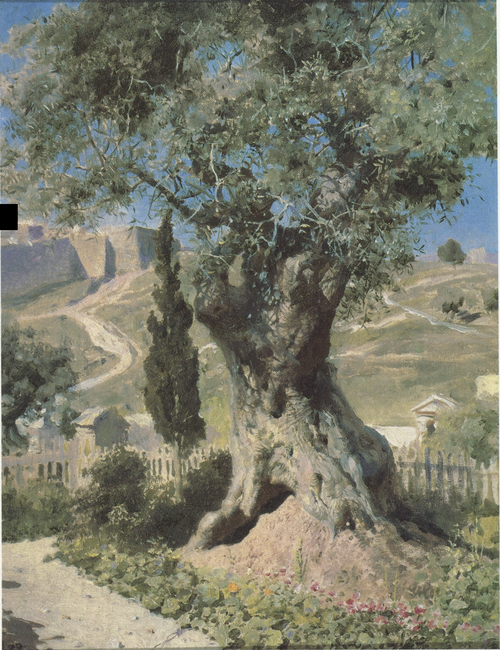 At the end of the 1870-s Polenov turned to theater painting. His first experience was connected with the activity of the Abramtsevo artistic circle headed by an important industrialist and patron of art, an artistically gifted person S. I. Mamontov. Polenov painted scenery for several plays of the circle — “The two worlds” by A. N. Maykov (1879), “Camoens” by V. A. Zhukovsky (1882), “The Scarlet Rose”, a staged version of S. I. Mamontov’s tale (1883), and some others, bringing easel painting methods into the art of scenery. The artist tried himself as actor, director and composer, which enabled him to achieve stylistic unity of his productions. Later he took an active part in staging performances of Mamontov’s Russian Private Opera (1885—1900). The artistic principles of scene painting, originated by Polenov, were to be developed by his pupil K. A. Korovin. Thus began a brilliant flourishing of Russian scene painting of the early 20th century.
In 1880s Polenov returned to the canvas “Christ and the Adulteress”. He had first conceived it during his student years in the Academy of Arts. Working at this canvas, he traveled to the Midle East (1881—82). His journeys resulted in a series of sketches which had a winning exactness of reproduced nature, intensity and striking colors. They were all shown at the Fifteenth Exhibition of the Itinerant Artists.
In his canvas “Christ and the Adulteress” (1886) Polenov made an attempt to renovate academic treatment of the New Testament subjects with the achievements of realistic painting. In the painter’s later work at the Life of Christ series landscape played a particularly important part. 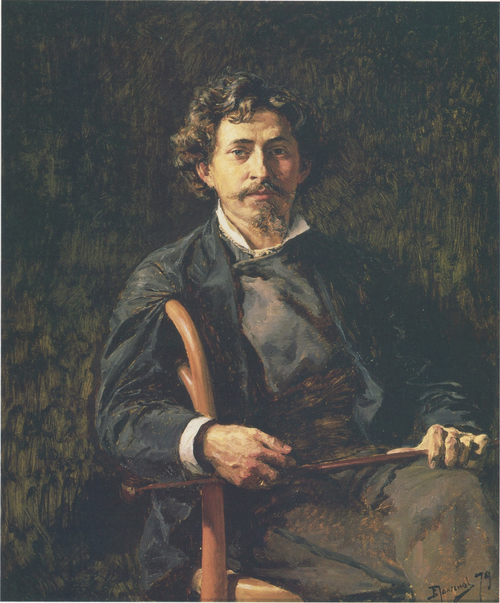 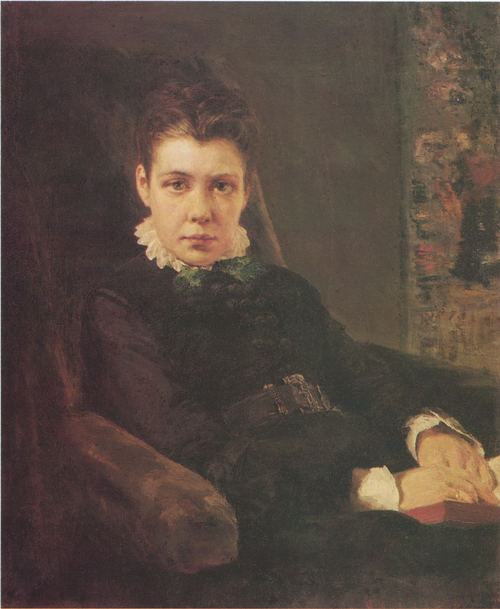 In 1890s Polenov painted landscapes imbued with picturesque rhythm, amazing in their beautifully harmonious composition, rich and versatile pictorial phrase — “Autumn in Abramtsevo”, (1890), “Early Snowfall” (1891), “Golden Autumn” (1893) and others. In them, Polenov expressed epic traits of Russian landscape most fully.
During 1890s Polenov also took an active part in reorganizing the Academy of Arts, combining this activity with teaching at the School of Painting, Sculpture and Architecture (1882—96). The artist gave all his forces to the erection of People’s Theatre. He considered theatrical public activities to be an “important cultural affair”.
In 1892, a country house, designed by Polenov, was constructed in his “Borok” estate on the Oka. It was to be a museum and picture gallery. The museum was opened for the public in 1903. In the early 20th century the artist designed the so called “Abbey” in his estate, built in 1904, which he used as his studio, and the Bekhovo church (1906). Both buildings are characterized by Art Nouveau style.
Polenov’s versatile artistic activity was based on his desire to be of use to the people, to educate them by means of tae beauty of art. This desire drew his work close to the general process of democratization of art, which was taking place in 1870s—80s. Taking an active part in this movement and being a “gallant knight” of the Itinerant Artists, a follower of their best traditions, Polenov had a special place among this association. 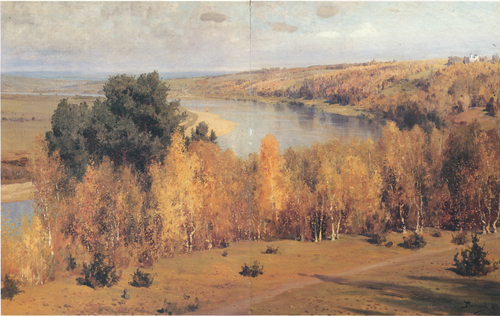 Polenov had his own idea of civic duty which he did as consistently as his associates. He saw his civic duty in aesthetic enlightening people, in giving people the art of joy and beauty. Polenov’s words from his letter to Vasnetsov in 1888: “I think art must give joy and happiness,— otherwise it is worth nothing”, express the artist’s aesthetic credo most clearly. His understanding of the purpose and the objects of art has very much in common with the idea of the necessity of “comforting” in art expressed by V. A. Serov several months earlier. This idea was shared by a younger generation of artists who established “comforting” and joy as art’s content. Therefore Polenov, a talented teacher, among whose pupils were K. A. Korovin, 1.1. Levitan, A. Ya. Golovin, L. O. Pasternak, and many others, most closely connected his life with the young generation of artists in 1880—90s. These artists saw Polenov as their associate and found his response to their creative search.
Owing to his active civic position and wide public activity, Polenov was always in the center of cultural events of his time. His world outlook and his artistic inclinations, made him turn both to the future and to the past. That is why his work is an important link connecting the art of the late 19th century with that of the early 20th century. 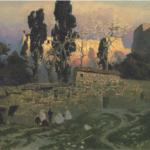 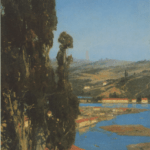 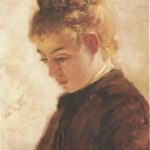 Head of the Model Blanche Ormier. Sketch for the canvas. Dragon-fly. 1875 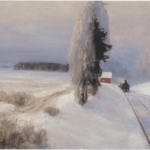 Railway near the Tarusskaya Station. 1903

Ravine. Sketch of the scenery for Ch.Gluck’s opera “Orpheus”. 1897 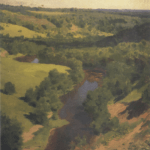 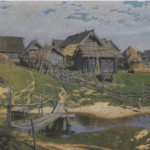 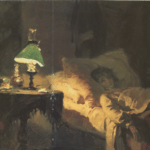 St. Helen’s Church. Chapel of the Temple of the Holy Sepulchre. 1882

Staircase to the Castle. Sketch of the scenry for the performance “Scarlet rose” by S. I. Mamontov. 1883 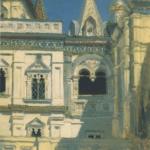 Tyrrhean Boundaries. Canvas from the series “Life of Christ”. 1911