Vygovsky Old Believers art. Cupboard door, ‘The Parable of the blind and the lame. 18th Century

The Old Believers of Vygovsky desert is a part of unknown history of ancient Russia, where the special place should be given to the Vygovsky Old Believers art. Briefly events were as follows. Since 1705 Vygovsky people suffered from seven consecutive years of crop failures. They needed more fertile land, which they later bought. The colonists chopped wood splitters, burned it, cleared, and sowed bread. It was a period of greatest prosperity, when the basic tradition of the spiritual life of the desert was created. The concept of a common historical, literary, icon painting and book printing developed. It was also a period of numerous economic achievements of Vyg: complete improvement of men’s and women’s monasteries, the general organization of the grain trade, the construction of the wharf on the Pigmatka river, on the shore of Lake Onega, ship building, were built two mills, two hospitals. Thanks to the skillful and subtle political leaders, consolidated members of the Old Believers community, in the first half of the XVIII century Vygovsky desert became the largest in the country economic, religious and cultural center, the northern capital of Russia. (All images can be enlarged) 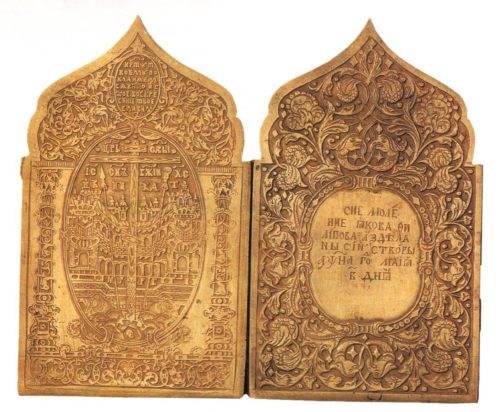 Triptych ‘Twelve Great Feasts and the worship of images of the Virgin’ (in the half-folded form – second and third sections). Vyg. Mid-18th century

Creative development of ancient traditions, the development of own style in all the arts, and the highest professionalism allow us to say Vygovsky heritage as a unique phenomenon in Russian culture of XVIII – nineteenth centuries. Like most ancient monasteries, Vygovsky desert had become a center of book learning. It had the richest library, instituted schools where children were taught to read and write, bookprinters established a workshop in which works of Old Russian and Old Believer writers were copied. They created a real literary school, the only one of the Old Believers. Products of this range were designed at a high level of literacy of users, they are characterized by a particular style, dating back to the Old Russian style of “weaving words”, the variety of rhetorical devices, complex and sometimes ancient language. In Vygovsky literary school existed almost all the genres that were in ancient Russia: hagiography, historical narratives, stories, visions, different types of words, sermons, letters, polemical writings, syllabic poetry. 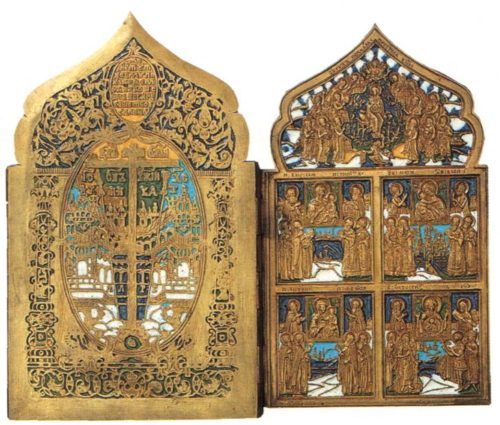 Triptych ‘Feast of the Mother of God and the worship of images’, 18th Century (half-folded)

Triptych ‘Feast of the Mother of God and the worship of images’, 18th Century (unfolded)

Artistic heritage of the desert is vast and extremely diverse. There is practically no industry of art, which would not have received development among Vygovsky Old Believers. They created paintings (icons, splints, miniatures, oil painting), objects of small plastics (carved wood and cast metal icons and crosses, church and household items) and applied arts (pictorial and ornamental embroidery, painting and carving on furniture and utensils made ​​of wood, wicker birch bark). Vygovsky Old Believers developed their own school, the stylistic unity which is obvious: the same motifs and techniques can be found in the decoration of manuscripts and wall plates, and in the icons, paintings and copper murals.

Tricuspid triptych ‘Crucifixion. The Trinity. Our Lady of the Sign’. 18th Century 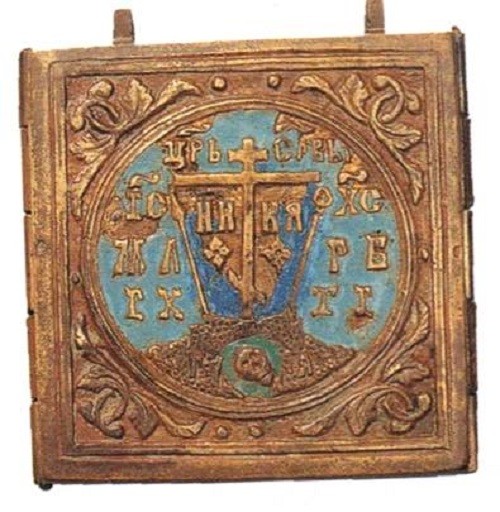 Tricuspid triptych ‘The Adoration of the Tikhvin Icon of the Mother of God. Sunday. Christmas’. Vyg. The first half of the 18th century (back side)

Tricuspid triptych ‘The Adoration of the Tikhvin Icon of the Mother of God. Sunday. Christmas’. Vyg. The first half of the 18th century

Tricuspid triptych ‘The Virgin of Tikhvin. Saviour. Saint Sergius and Barlaam’. Vyg. The first half of the 18th century

Triptych ‘Deisus the forthcoming’. 18th Century (back side) 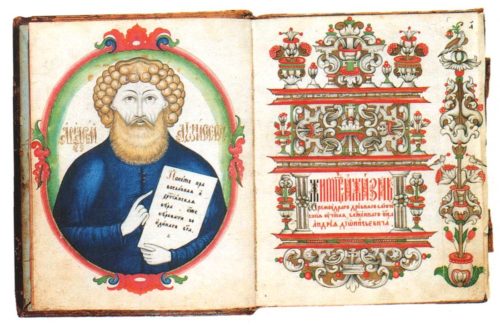 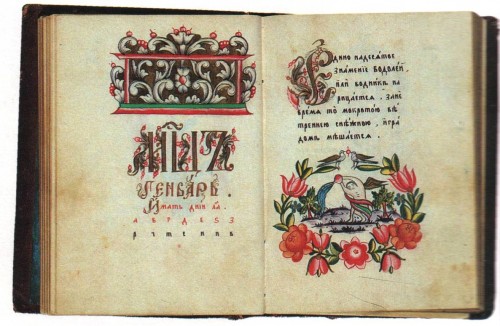 Miniature ‘Aquarius’, the image and initial of Pomeranian ornament, Life of St. Pulcheria and Mesyatselov. Lexa. 1836 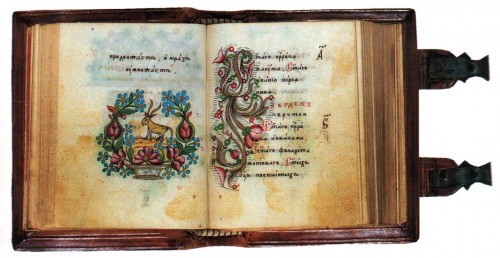 Miniature ‘Capricorn’ and the initials of the Pomeranian ornament of Mesyatselov (calendar) with Easters. 1836 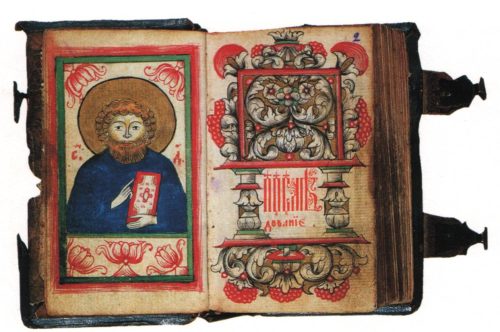 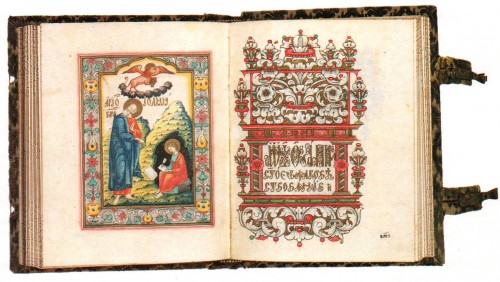 Miniature ‘The Holy Evangelist John the Theologian’ of the Gospel. 1830s 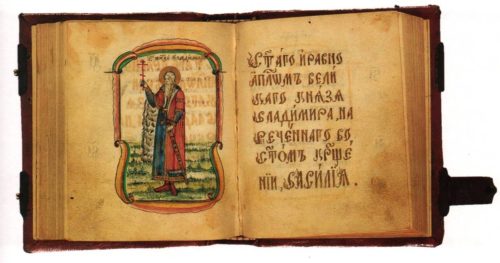 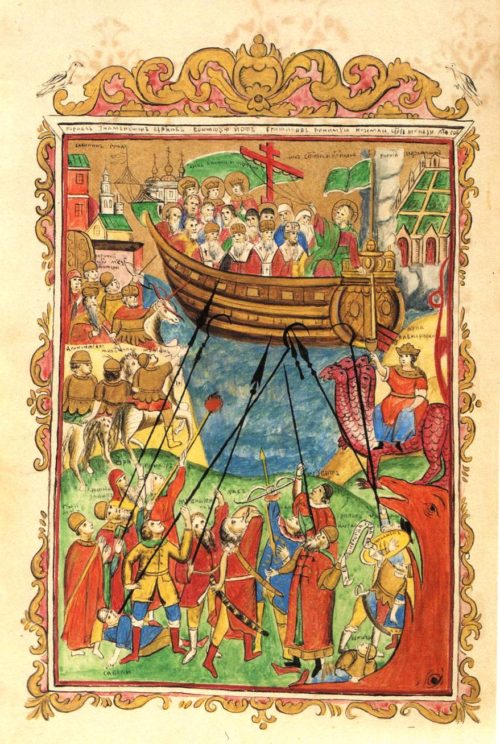 Miniature ‘The Militant Church’ from the ‘Creation’ of Simeon of Thessalonica. Vyg. 1820 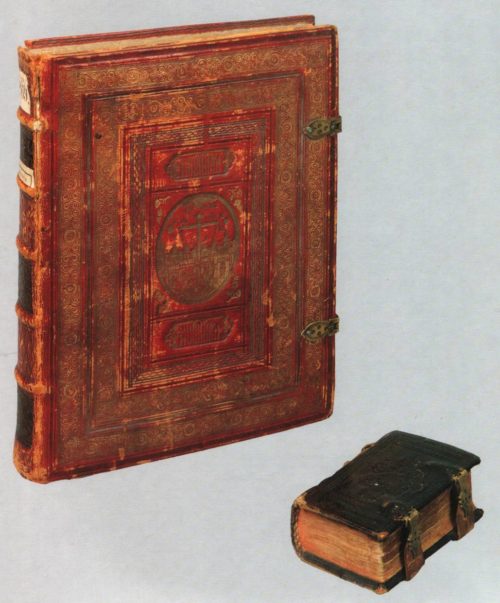 12 copper icons (‘Christ Good feast of Silence’) embedded in the board. 19th Century 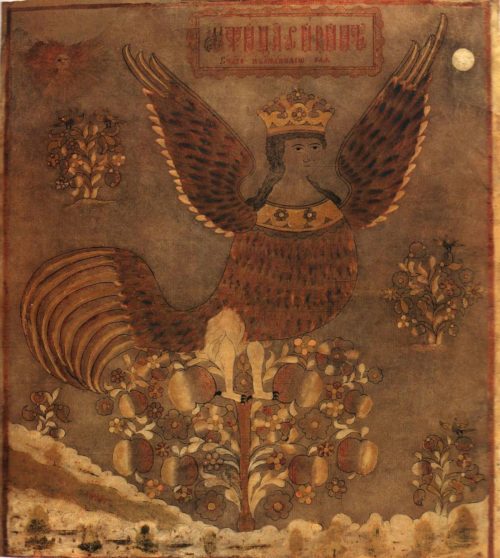 Copper enamel icons ‘Protection of the Blessed Virgin Mary’, Our Lady of worship of images, chosen saints (embedded in the board). 19th Century 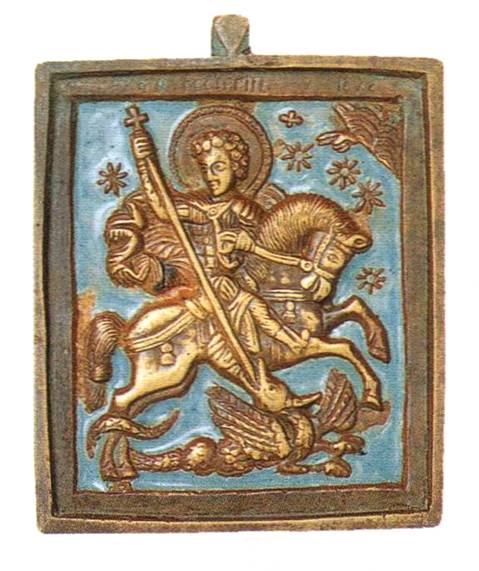 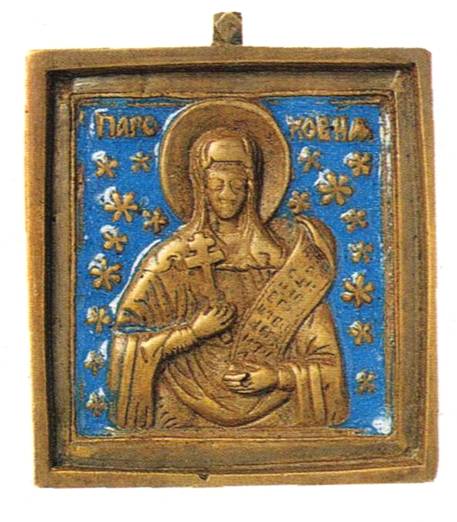 Enamel Triptych ‘St. Nicholas with the forthcoming’, ‘Our Lady of the Afflicted’, ‘Saints Kirik and snail and chosen saints’. Pomorie. 19th Century 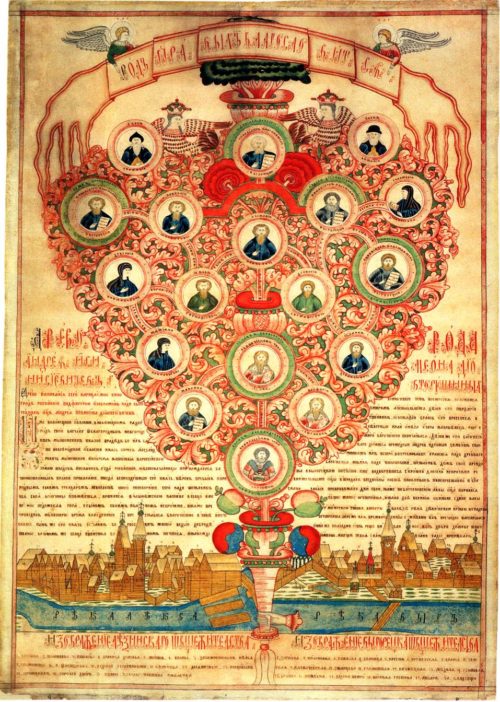 Four-door Triptych, ‘Twelve Great Feasts and the worship of images of Our Lady’. Vyg. 1717 (back side)

Four-door Triptych, ‘Twelve Great Feasts and the worship of images of Our Lady’. Vyg. 1717 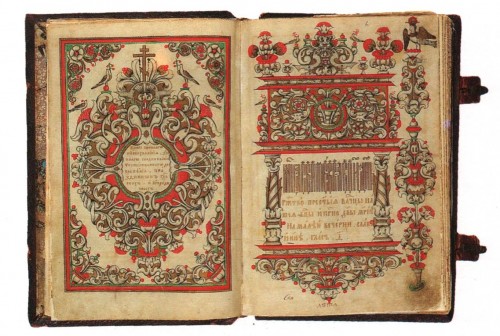 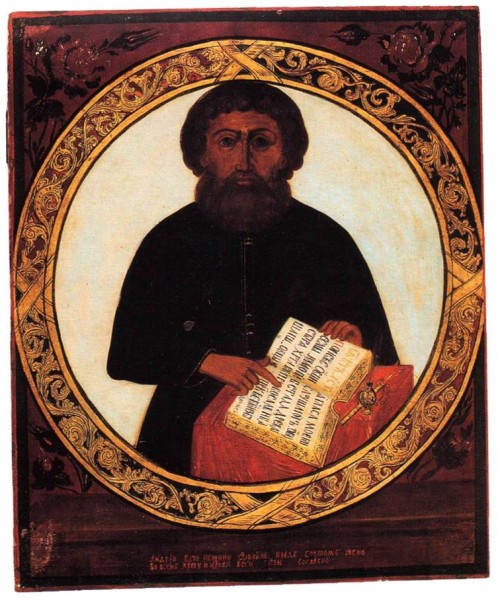 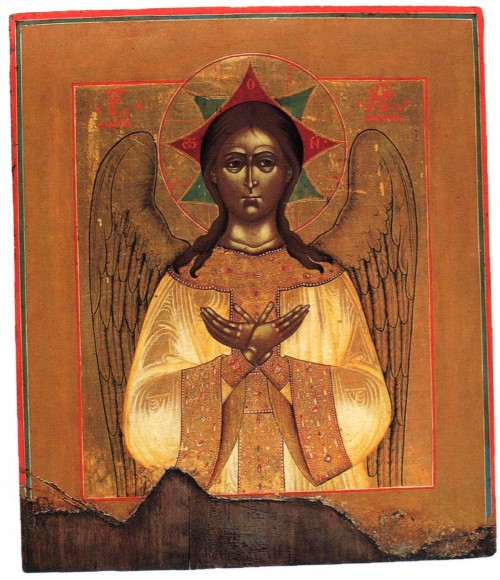 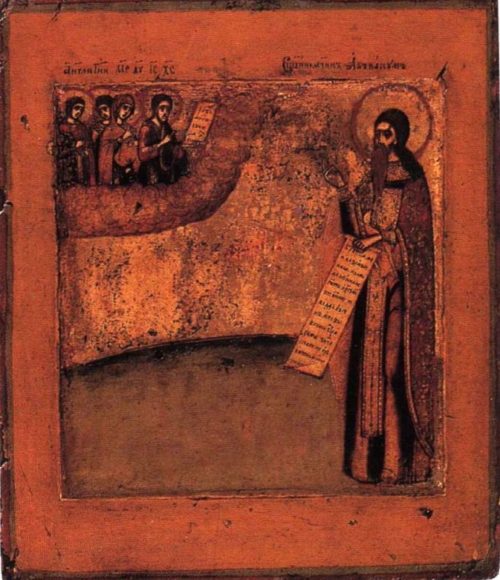 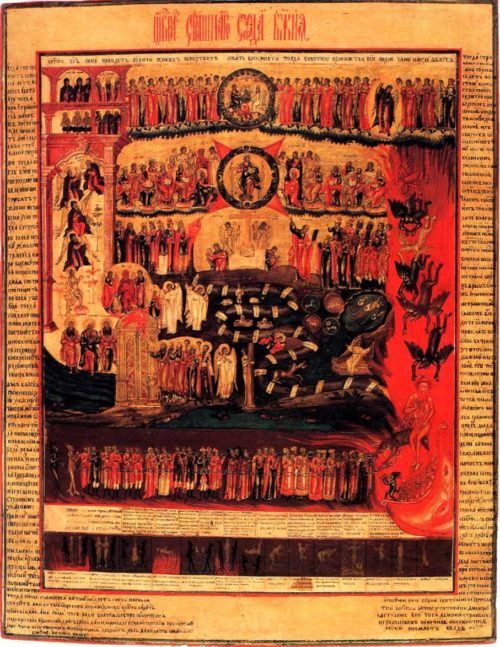 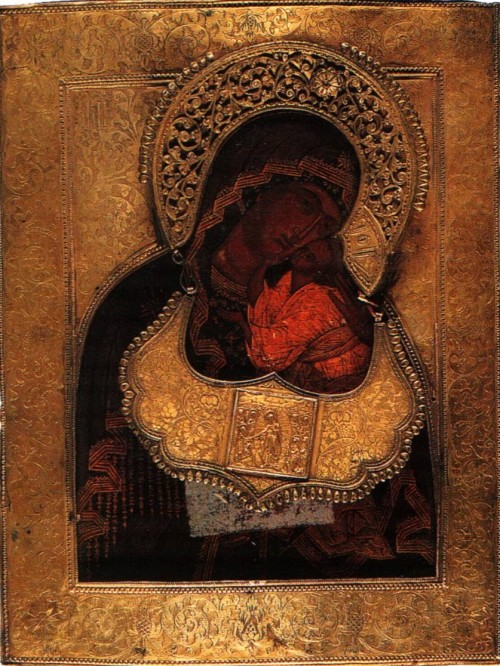 Icon of the Mother of God of Tenderness Yaroslavl. Pomeranian letter. 18th Century 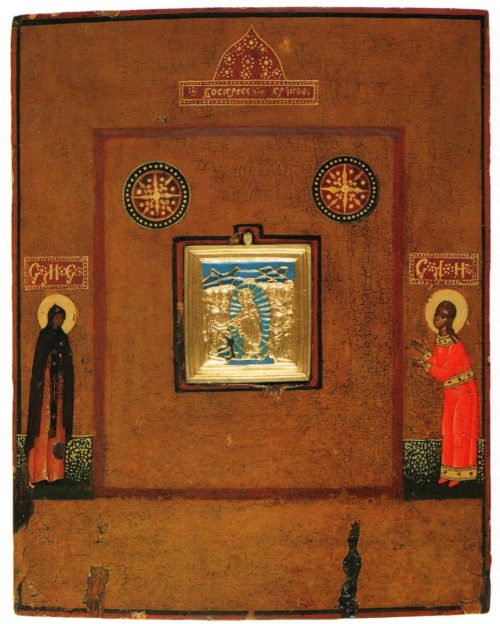 Icon ‘Resurrection’ embedded in the board with the upcoming holy Mary and St. Demetrius. 18th Century 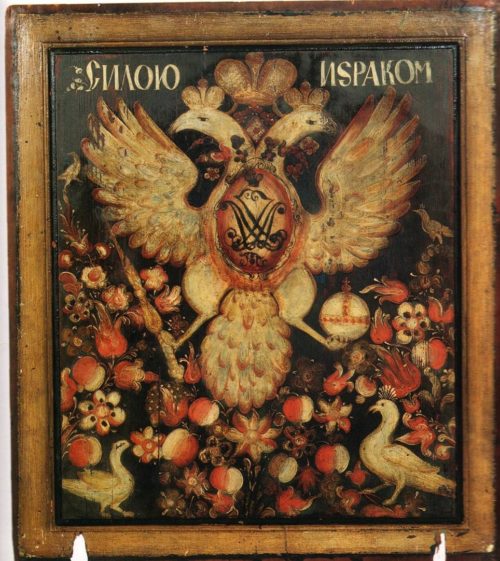 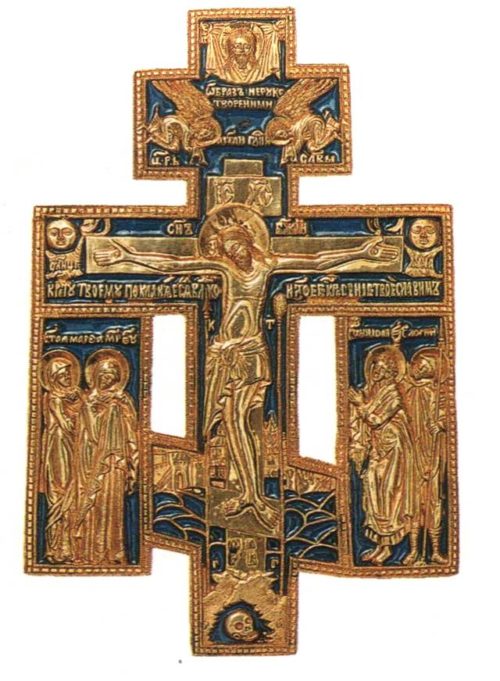 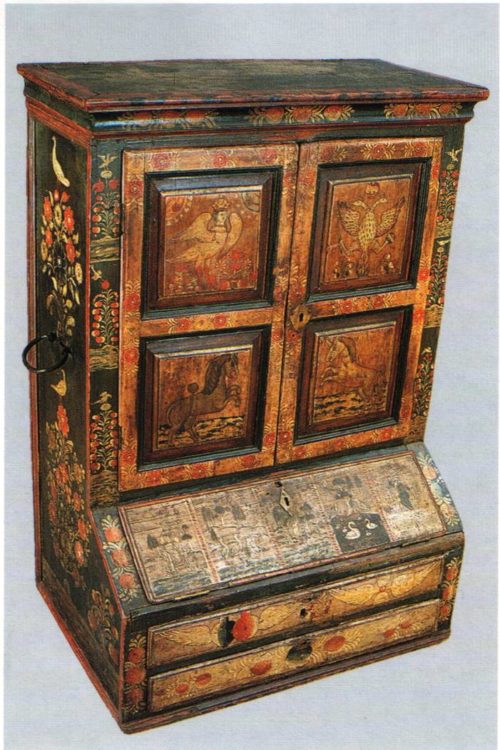 In 1837, the government team (by order of Nicholas I) sealed (closed) the chapel, 1848 – expropriated estates, and later evicted inhabitants. In 1855, the monastery ceased to exist.