The world of art movement 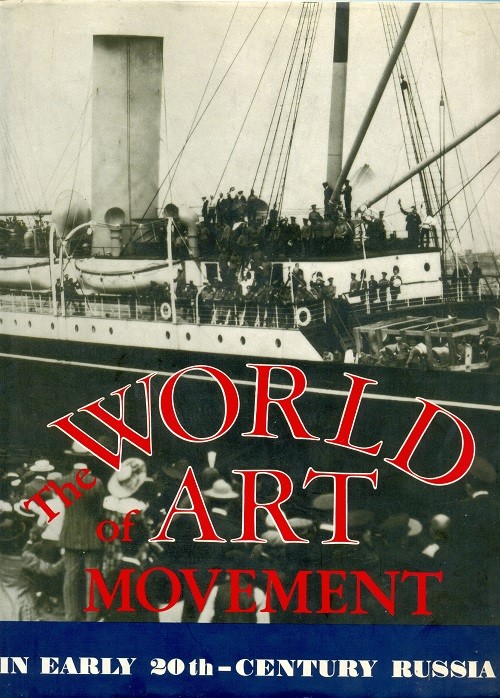 The world of art movement

The world of art movement. In the history of Russian art, the late nineteenth century was a period of creative innovation and a fundamental restructuring of form. In the 1890s, a new chapter was opened in Russia’s visual arts by a generation of artists who radically revised almost the entire range of established tradition. Authorities that had seemed immutable were suddenly topped from their pedestals. The horizon of artistic creativity broadened, a new aesthetic emerged, a new art trends arose, all in striking contrast to what the earlier art movements of the nineteenth century had asserted. The re-evaluation of values led to cardinal changes in the interpretation and understanding of creative objectives and techniques.

Vsevolod Petrov. Photograph. 1970s. The author of “The world of art movement” book

Before 1898
At the turn of the 1880s and 189s, a group of secondary-school boys, subsequently university students, gathered at the house of the architect Nikolai Benois, father of the two artists, Alexander and Albert Benois. It began as a club of several pupils studying at Karl Mai’s Gymnasium in St. Petersburg – notably Alexander Benois, Walter Nouvel, Konstantin Somov, and Dmitry Filosofov. In 1890, Benois and his friends set up a Society for Self-Education which arranged regular lectures on various subjects, discussed the latest books and magazines, and held musical evenings.

Alexander Benois. Frontispiece for the book My Recollections

The very name, World of Art, was devised by this group long before the journal and the related exhibitions began. The lectures read dealt with the history of the visual arts in the West and in Russia (Benois and Bakst), literary problems (Kalin), music (Nouvel, with Diaghilev providing illustrative accompaniment), history (Filosofov), and religion (Skalon). The “society” existed in this form till 1891. But when Evgeny Lanceray , who was to become an artist, and Alfred Nurok, the future writer and art critic, joined the group in 1891-93, the issues of the day began to crowd out the interest in history and art. At the same time the idea arose of putting out a journal and arranging art shows, which, however, was not fated to be realized soon.

Alexander Benois in his study in St. Petersburg. 1910s

In 1893, Benois made his literary debut with a chapter on Russian artists for Richard Muther’s Geschichte der Malerei im XIX. Jahrhundert, while two years later Diaghilev published his first art reviews. In 1897, Diaghilev made his entrepreneurial debut, arranging an exhibition of English and German watercolorists, with one room devoted entirely to the portraits of the then highly popular German painter, Franz von Lenbach. He then organized an exhibition of Scandinavian art at which seventy odd artists of Sweden, Denmark, and Norway were represented. The success of these two shows, both of which were mounted in St. Petersburg, gave Diaghilev confidence and impelled him to undertake the daring initiatives that were to serve as the point of departure for the journal and exhibitions of the World of Art.

It was this man who proved able to translate into practical organizational terms all the urges and desires of the society’s members, that for years on end had gone no further than mere talk. “…What we lacked, though, was a ‘leader’’. Nothing would have come of it further, except a muddle, were everything confined to friendly chats, or even attempts to form a business-like association. Our personal qualities and temperaments were largely responsible. All we Petersburgians were spoilt, fastidious ‘lordlings’ or extremely impractical dreamers…”

Alexander Benois. The Bath of the Marquise, 1906. Gouache, pen and ink on cardboard. Tretyakov Gallery, Moscow 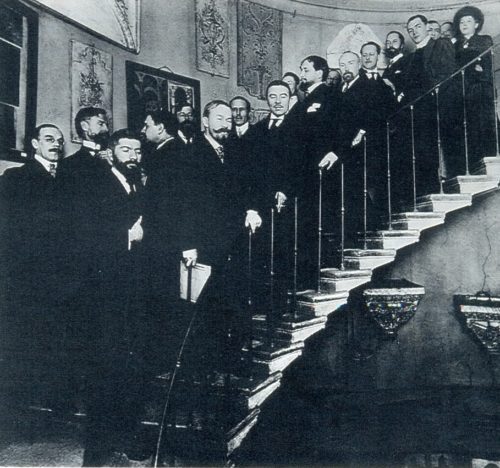 The annual meeting of the World of Art. Petrograd, 1914 (the image can be enlarged)