Moscow in the paintings of Yuri Pimenov

Pimenov loved Moscow: with its new buildings, passers-by hurrying on business, sights. In his paintings, he depicted the everyday life of ordinary people: in the painting “New Moscow” – a girl behind the wheel of one of the first Soviet cars, in the cycle of works “New Quarters” – residents of Moscow, crane operators, girls-painters, fashionistas, newlyweds.

Yuri Pimenov was born in 1903 in Moscow. His father was a lawyer, was fond of painting himself and did not mind when his son decided to connect his life with art. The Pimenovs lived not far from the Tretyakov Gallery, and as a child, Yuri often visited there, looking at paintings by eminent masters. He especially liked the landscapes of the Itinerants, the painting by Alexei Savrasov “The Rooks Have Arrived” left a mark for the rest of his life.

In 1920-1925, Pimenov studied at one of the best art institutions in the country – at VKHUTEMAS. There, his teachers were graphic illustrator Vladimir Favorsky and architect Sergei Malyutin. Together with graduates of VKHUTEMAS Yuri Pimenov organized the art association “Society of easel artists”. At the same time, he was fond of German Expressionism. In the first quarter of the 20th century, the young artist was interested in the themes of sports, cinema and the achievements of science. In 1927, he created the painting “Give Heavy Industry!”, Which was highly praised by critics. 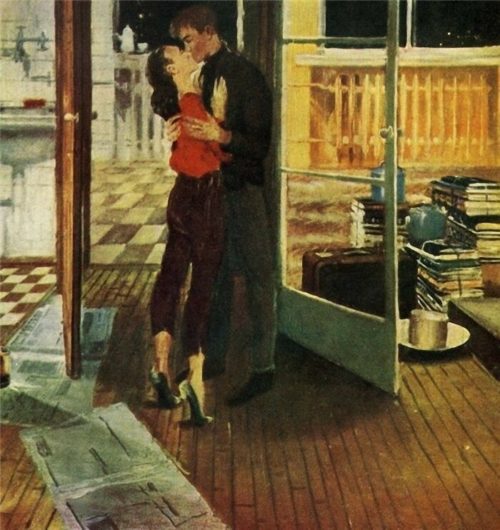 In the early 1930s, a difficult time came in the life of the master. After the decree “On the restructuring of literary and artistic organizations” the work of all artistic associations was banned. Pimenov was criticized and accused of formalism. The painter fell seriously ill, he later recalled this period: “… it was my difficult time. My nerves crept apart, I could not work at all. In addition, professional troubles befell me: one book that I illustrated was recognized as formalistic for drawings, and I found myself without money and without work, because after this book I was not given work in magazines, and we lived on the money that my wife earned money by shorthand. ”

The painter found the strength to return to work. In the 1930s, the life of the capital became the main theme in his work. The artist could walk all day in the most remote places of Moscow, often traveled to the Moscow region and wandered through the surrounding forests. He created city landscapes, depicted neighborhoods and new buildings in new Moscow, streets and houses. The painting “New Moscow” dates back to 1937.

During the Great Patriotic War, Yuri Pimenov created propaganda posters in TASS Windows: he portrayed the heroes of the front and rear. During the evacuation, the artist stayed in his hometown, painted genre paintings reflecting the everyday life of Moscow, and in 1943 he was sent to the North-Western Front – to the Staraya Russa region and to Leningrad.

In 1944, the artist created the picture “Front Road”, in which he again returned to his favorite composition used in “New Moscow”. The painter again depicted a girl driving a car, but this time in a different, terrible reality of war.

The beauty of Moscow and its people was revealed these days in a special, tragic, noble light. The gentle hands of the city women, together with the experienced strong hands of the peasant women, took the shovels in the trenches and ditches under the cold rains of this terrible autumn – and withstood the test. The darkened, silent, watchful city was tragically beautiful.

After the war, Yuri Pimenov taught at the art department of the All-Union State Institute of Cinematography (VGIK). In the work of Pimenov, peaceful themes sounded again: the artist depicted Moscow and Muscovites, construction projects of new districts, genre scenes from life. The cycle of works “New Quarters”, in which the artist tried to notice insignificant details of everyday life, belongs to the 1960s. The artist associated the new quarters not only with building plans, cranes and workers, but above all with the people who will live there.

On small-format canvases, Pimenov portrayed wandering to the bus stop along the paths – there were no sidewalks yet – townspeople, crane operators, girls-painters, fashionistas, newlyweds.

In his memoirs, Pimenov wrote that a genre painter should be a little onlooker, because in a hurry you won’t really see anything. An artist without a model, without nature, considered Pimenov, a poor, disadvantaged person. And the whole power of genre painting lies in the master’s ability to see big events in everyday life, as, for example, in the painting “An Ordinary Morning”.

Having gone through a difficult period of criticism, when the artist did not have the opportunity to work, Pimenov became a recognized master of socialist realism. Since the mid-1950s, he traveled a lot: he visited England, India, France and Italy, wrote essays on travel. But most of all, the Russian painter still loved Moscow, its sights and remote areas where ordinary people live, go to work and raise children. Finding romance in everyday life is a special gift of Yuri Pimenov.

Tatyana Khazova is a professional artist from the dynasty of Gzhel masters. Born in the