If we look at the things, even very simple ones, that were used day after day in old village homes, we shall hardly find a single piece devoid of decorative element. The ornament might consist of a modest painting in two or three colours, or an unpretentious carving, but it was not uncommon to meet an ordinary household article which was a genuine work of art. These qualities of Russian folk-styled woodenware are illustrated by a collection of painted and carved woodwork of the 16th-19th centuries belonging to the Smolensk Museum. Carved painted woodwork

The Museum, which in 1988 will mark its centenary, has in its possession numerous objects of applied art. For these valuable collections it is indebted to Maria Tcnisheva (18677-1928). In the last decades of the 19th and the early 20th century, Tenishcva was known as an active champion and propagandist of Russian art. She founded art schools, sponsored art exhibitions in Russia and abroad, published and contributed to the journal The World of Art, carried on successful creative and research work in enamel-painting. From 1893, in Talashkino, her country residence near Smolensk, she began to collect unique objects of antiquity which were brought from different parts of the country. These pursuits were part of an extensive programme which was aimed at reviving handicraft industries as the collective foundation of popular art. In 1905, Tenisheva transferred her collection, widely representative by that time, to Smolensk, where it was exhibited in a special building as the museum of Russian Antiquities. In 1907 she showed it in the Louvre, and in 1911 she presented it as a gift to the Moscow Archaeological Institute.
In Russia, with her large tracts of forest land, wood has always been a handy material. Being easily workable, it has been utilized for many purposes ranging from the construction of an izba (a peasant’s cottage) to the making of a cradle and a toy for a child, a distaff and a spindle for a woman, a scoop and a salt-cellar for a festive table, a sledge and a shaft-bow for driving. Using a simple tool – an axe, a knife or a wood chisel – the craftsman covered with ornament the structural details of the house and articles of domestic use. Pieces of furniture, tools and utensils were decorated with painting, which sometimes was laid over the carved pattern. Perishable foods were kept in baskets and boxes made of birch bark. They also had painted or carved ornament. Wood was in daily use in every sphere of life and material culture.
Wood is a material of exceptional beauty and an almost unlimited range of application. An outward effect of a wooden article is that of simplicity and monolithic quality, the unity of decor with the bulk of the thing, its architectonics. Aesthetically the appearance of the article is determined by the rhythm of the pattern, its sparsity or denseness. The ornaments are for the most part conventional. The motifs, decorative and pictorial, are largely those which could be suggested by the natural surrounding and the experience of everyday existence, as well as by mythology. Apart from geometrical carvings with symbols traceable to the ancient pagan cults, there are motifs borrowed from baroque, classicism and empire. A genre scene can be depicted together with figures of fantastic creatures, the exotic lions and peacocks. Cultural layers far removed from one another organically coexist in folk art and can meet in one piece of work.
The characteristics of the decor depended on the category of the objects and the technique of execution. The 19th-century house carving in the regions situated along the Volga was notable for its contrasting, monumental, legible relief. It was bound up with two different traditions: that of the decorative carving of ships and the work of stone-masons who built and decorated Russian churches. It also could include elements from the systems of architectural orders. The work at dishes-scoops, yendovas (vessels with a spout, for pouring out liquids), soup-basins – began from the chiselling of the main body which often served as the most important expressive element. Thus scoops were usually stylized to imitate a duck or some other waterfowl. Blocks for calico printing were covered with low-relief patterns, so that the whole design was on the surface plane. Woodblocks for making honey-cakes had an inverted relief on several planes, which was often bound by a painted pattern in small recesses.
Very diverse were carved and painted ornaments on distaffs and spinning-wheels. In the 19th century, the northern distaffs of the Mezen type still retained archaic motifs reminiscent of the geometrical ornament of the Creto-Mycenaean culture. Distaffs made in
Gorodets, a town on the Volga, combined carving with patterns of inlaid fumed oak. Their motifs included gallant scenes showing, as was noted by scholars, a rococo influence. On the whole, the style of the northern production is more laconic, conservative and severe. The middle part of Russia, where handicraft industries are bound by many ties with big cities, demonstrates a comparatively agile, variable and receptive style.
Testimony to the artistry and refinement of handicraft work is provided by the decorative paintings of Yakov Yarygin, a master from the North, as well as by sculptured figures of Peter I on horseback and King David, which are believed to be the productions of Smolensk. The latter image, expressive of dramatism and nobility of spirit, makes you forget about the traditional division of art into professional and the so-called naive. The Smolensk collection demonstrates once again how great are the creative potentialities of folk craftsmanship. 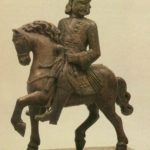 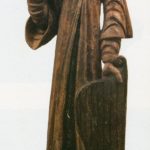 Figure of King David with a dulcimer Mid- 18th century 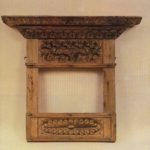 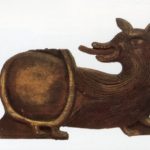 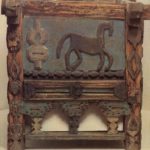 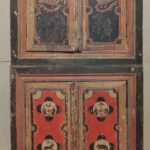 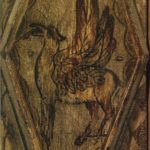 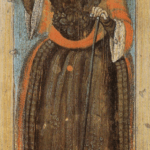 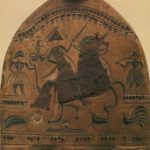 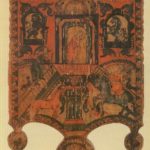 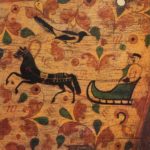 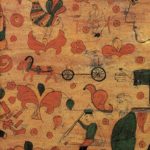 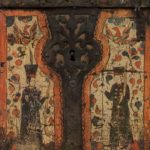 Chest. The beginning of the XIX century. Master Yakov Yarygin. Fragments of painting the walls. 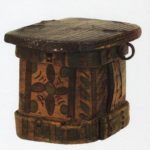 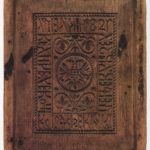