Church of John the Baptist in Kerch – the oldest in Russia

Church of John the Baptist. Kerch is one of the oldest cities in the world. And this glorious city, which has seen a lot in its lifetime, has a truly priceless treasure. The most ancient unique temple has been preserved in Kerch to this day. A temple in which services have been held from time immemorial to this day.

The uniqueness of the temple lies in the combination of two architectural styles: cross-domed and basilical. According to legend, Andrew the First-Called himself, who actively preached in those places, blessed the construction of this temple. The ancient temple still keeps the name of its founder in secret, which is of particular interest to Crimean historians.

Undoubtedly, over the centuries of its existence, the temple has changed several times: it was rebuilt, and restored, and repaired, and, of course, changed its original appearance.

The history of the creation of the temple

The time of the founding of the Church of John the Baptist has long been the subject of controversy among historians. They were puzzled by the presence of architectural elements of different time intervals. Only the excavations carried out by Professor Makarova made it possible to dot the i.

As it turned out, in the 6th century, under the reign of Justinian the Great, the basilica was built. A well and a baptismal were found next to it, which testifies to the Christian purpose of this religious building.

Later, the city was captured by the Turkic Kaganate, and two centuries later it became part of the Khazar Kaganate. The Khazars held services in the temple, right up to the capture by Mstislav Vladimirovich. During the seizure, a fire broke out, as a result of which the temple was badly damaged. Mstislav Vladimirovich, Prince of Tmutarakansky, began a serious reconstruction of the temple, which lasted for 60 years.

After Kerch was captured by the Polovtsy, the temple remained in disrepair for many years. In the XIV century, the Genoese reconstructed the temple. The walls of the temple are covered with plaster, frescoes are applied. It is assumed that the frescoes were executed by the disciples of Theophanes the Greek.

During its existence, the Church of St. John the Baptist has seen a lot. They prayed within its walls:

Christian Byzantines;
Khazars-Jews;
Genoese Catholics.
With the arrival of the Crimean Khanate in Kerch, the Christian temple became a mosque. The Muslims covered the frescoes with a thick layer of paint, but did not destroy the temple.

After Kerch became part of the Russian Empire in 1801, full-scale reconstruction work began. The northern and western vestibules and a two-tiered belfry were added. All these reconstructions harmoniously blended into the new look of the temple. 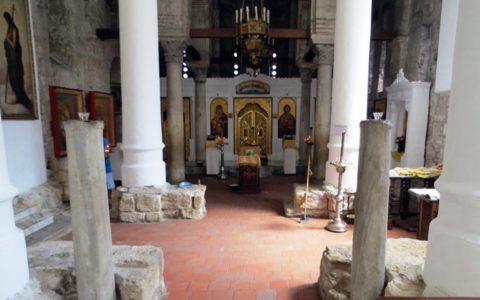 Architecture of the Church of John the Baptist

The architecture of the temple attracts the eye with its uniqueness.

It is composed alternately of well-polished white blocks and fired thin red bricks. This combination forms an elegant striped masonry characteristic of Byzantine buildings. This architectural technique, in addition to decorative value, also has a practical anti-seismic value.

Holy Dormition Monastery in Bakhchisarai. Orthodox faith works miracles. It is passed down from generation

There is a nice place just a few kilometers from the Moscow Ring Road,

Spaso-Preobrazhensky Solovetsky Stavropol Monastery Houses and hotels have been built near the Solovetsky Monastery.