On the eve of Ivan Kupala Day

Ivan Kupala Day or Kupala Night is enthusiastically celebrated in Russia, Ukraine, and Belarus on the night of 7 July. The celebration relates to the summer solstice when nights are the shortest and includes a number of Pagan rituals. The Russian, Ukrainian, and Belarusian name of this holiday combines “Ivan” (John — the Baptist) and Kupala which is related to a word derived from the Slavic word for bathing, which is cognate. The latter is reinterpreted as John’s baptizing people through full immersion in water (therefore his biblical title of the Baptist). However, the tradition of Kupala predates Christianity. Due to the popularity of the pagan celebration, with time it was simply accepted and reestablished as one of the native Christian traditions intertwined with local folklore.

The eve of Ivan Kupala is special. Ceremonies conducted on this day, are associated with fire, grass and water: it is customary to kindle fires on the banks of rivers and jump over them, circle dances, swimming, collecting grass to weave wreaths and fortunetelling.

On Ivan Kupala witches, werewolves, witches, mermaids, goblins and water are particularly dangerous, so to sleep this night is impossible.

One of the main traditions of the holiday – swimming in lakes and rivers. Water in reservoirs on Ivan Kupala becomes healing, acquires special magical properties. In addition, on Kupala night mermaids leave lakes and rivers, so until August 2, Ilyin day, you can swim safely.

On Ivan Kupala Day, at sunset by the river or on a high hill, young people test themselves of bravery and faith jumping over the flames of bonfires. The failure of a couple in love to complete the jump while holding hands is a sign of their destined separation. The celebration also includes circle dances, singing folk songs, playing games. Slavs believed that the fire on Ivan Kupala Day has a healing cleansing power, reduces damage and wards off evil spirits.

Belorussians jump over a campfire on the eve of Ivan Kupala Day, an ancient night long celebration marking the Summer Solstice, the shortest night of the year, in the village Strochitsy, south of Minsk

Herbs in Midsummer Night acquire magical power: become especially healing, give health and vitality, protect from evil spirits. Ivan-grass harvested at night or at dawn is dried, and used all year.

One of the symbols of Midsummer – ‘Ivan-da-Marya’ flower. According to ancient legend, the juice squeezed from the plant, returns the ability to hear, and returns lost mind. Collected on Kupala night flowers Ivan-da-Marya are put in the corners of rooms so that thieves could not get into the house.

Great force for protection against evil spirits possessed wormwood: it was dried and hung in the house, woven into wreaths and worn on a belt. To scare away witches who become especially dangerous on Midsummer night, the plant of nettles is laid out on the doorstep and window sills in the house.

According to legend, the night before Midsummer fern is blooming: from the center of the bush flower displays an arrow with a bud, like a hot coal, and at midnight for a moment shows fiery flower. If to pick this flower – you can acquire the ability to see the treasures buried in the earth, to understand the language of animals, open all the locks, just attach flower to them, you can receive the gift of foresight, take any shape and become invisible.

To pick a fern flower is difficult as the forest evil protects it in every way: it calls you out, with a familiar voice. To respond or look back in any case means you can lose your life. Having picked a flower – hide it under your shirt and run without looking back. 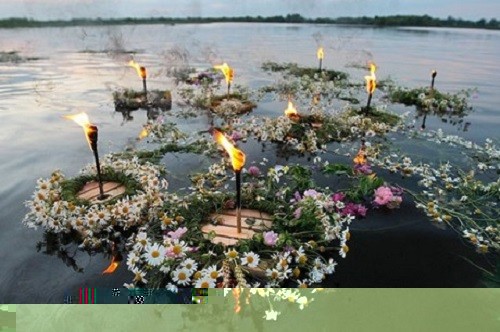 Midsummer girls make wreaths, stuck candles into them, leave them on the water

Midsummer girls make wreaths, stuck candles into them, leave them on the water and wonder if the wreath doesn’t sink and floats – then speedy marriage is expected. The longer the wreath stays on the surface of water – the happier life is, the longer the candle is burning the longer life will be.

Wreath on the water

Wreath on the water

It is believed that those who take part in the celebration of Ivan Kupala Day, will find happiness and love.