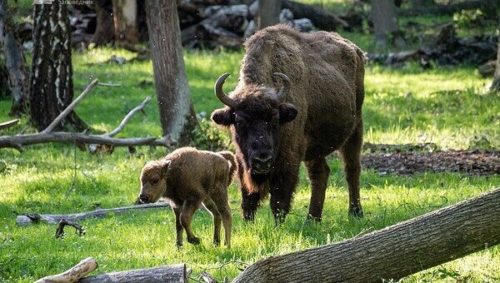 In the Moscow region there are national parks, natural monuments, biological stations. But there is only one reserve. To get to the state natural biosphere Prioksko-Terrasny reserve in the Moscow region, you need to go south from Moscow to the banks of the Oka.

Here is a biosphere reserve recognized by UNESCO. In Russia there are 35 more such places, but in the central part of the country there are only a few such reserves.

The state natural biosphere Prioksko-Terrasny reserve in the Moscow region is considered one of the smallest reserves in the country – less than 5 thousand hectares. For example, Losiny Ostrov is 2.5 times larger. However, the relatively modest size does not interfere with the peaceful coexistence of two hundred species of animals and birds here. There are 913 plants growing here.

People come here to see forest bulls – bison. At the beginning of the last century, the wild population of ungulates was destroyed all over the world. Therefore, in recent decades, scientists have been restoring the species. A significant contribution was made by the specialists of the Prioksko-Terrasny Reserve in the Moscow Region. Visitors also help by becoming patrons of the “Adopt a Bison” program.

A month and a half has passed since the end of the Great Patriotic War. In June 1945, it was decided to create the Moscow State Nature Reserve. It includes five zones, including the Prioksko-Terrasny area. Three years later, it became an independent reserve.

Exploration of these places began in the second half of the 19th century. Then the botanists of Moscow State University found unique plants here. By all the laws of nature, southern steppe grasses could not grow in this part of Russia. The phenomenon was named “Oka flora”.

In the early 50s, nature reserves began to be closed in the country, and they tried to cut costs. However, the scientific community was able to defend the Prioksko-Terrasny area. Partly due to the fact that the Central Bison Nursery was created here. All thanks to the efforts of the scientist Mikhail Zabolotsky, who laid down his life to revive the bison population. In 2015, the reserve was named after a zoologist.

The offspring of the bison nursery numbers more than 600 individuals. From here they were settled not only in Russia, but also in neighboring countries, in their natural habitat. A nature museum was opened in the reserve, monitoring of the ecosystem was organized, and now scientific research is being carried out.

It is impossible to inspect the entire state natural biosphere Prioksko-Terrasny reserve in the Moscow region on your own. Still, they are trying to preserve nature in its original form on the territory and to reduce the anthropogenic load, that is, to level the human factor. Therefore, most of the zones are visited only as part of an excursion and along a pre-laid route.

A small complex with literally three rooms. They contain stuffed animals and collect information on the history of the reserve.

Excursion “The Road to the Bison”

On weekends, it is held every hour, the last one at 15:00. In the afternoon, the groups are large. Grab carrots, apples, or zucchini. Before the start of the trail there is a box where you can put gifts for the animals of the reserve.

On the excursion, they show bison, talk about breeding bison and season the scientific story with funny stories from the life of the inhabitants of the reserve.

The tour lasts about 1.5 hours, get ready to walk a lot. The story of researchers is suitable for older children, babies quickly get bored.

High-altitude ecological path, from the ground – 7-8 meters. Bridges, passages, which are hung between the observation decks. In some places, the path reaches the very crowns of trees. The route will appeal to all those keen on natural sciences. There are interactive stands along the trail, from which the voices of local birds can be heard.

This part of the Prioksko-Terrasny Nature Reserve in the Moscow Region is called an ecological park. It is especially suitable for children. The park has cable cars, suspension bridges. Along the route, there are tasks, completing which, you will learn more about the inhabitants of the forest. There are only four paths, they differ in level of difficulty and height.

Prioksko-Terrasny reserve at different times of the year

You can come to the state natural biosphere Prioksko-Terrasny reserve in the Moscow region at any time of the year. But if there is a desire to observe the bison and bison up close, then it is better to visit the center in the autumn and winter months. At this time, the animals stray to the feeders along the route. Another tip: “The Road to Bison” is better to visit in the morning on a weekday, when there are fewer people.

Ecological trail “Through the foliage” and the park “Derevo-Dom” are open from April to November. In cold and bad weather, they can be closed. There is also a recommendation to arrive early, while there are still few guests. By noon, a lot of tourists come together, and there is a problem with parking.

Moscow Zoo. It all started with an animal exhibition, which was held in the Moscow