Rare treasures of Russia
Russia, with its rich history and changing eras, also rich in treasures that are found regularly. Here are just a few of the most notable stories of treasure hunting. In the Urals mine “Syrkov log” in 1843 was found platinum nugget weighing 9635 grams. Unfortunately, it has not been preserved as it was illegally melted. It was the largest platinum nugget found in the Urals. In August, 1904 to the office of the Ural mines was brought platinum nugget weighing about 8395 grams. It is the second largest of the mined in the Urals and the world’s largest of the currently existing on the ground. This nugget is kept in the Diamond Fund of the Kremlin.

The Diamond Fund of the Kremlin has the world’s only collection of platinum nuggets. 20 biggest of them have a total weight of over 54.6 kilograms. The biggest gold nugget was found in 1842 in the Urals in the valley Miass Syutkin fortress. It is called the “Big Triangle” and weighs more than 36 kg. In 1842 it was rated 28,146 rubles.

In our country, houses a rich collection in the world of gold nuggets in 1967 in Moscow at the exhibition of the Diamond Fund of the USSR was represented by 120 unique gold and platinum nuggets total weight of over 300 kilograms. Here you can see the gold nuggets – “Horse head”, weighing 14 kilograms, “camel”, weighing 9.3 kilograms, “rabbit ears”, weighing 3.34 kilograms, the famous “Mephistopheles”, weighing 21 grams, and others. 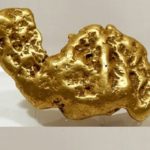 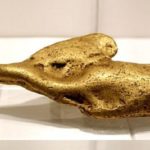 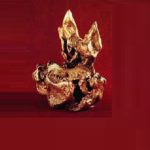 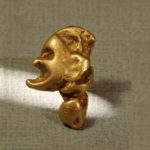 Cup-boat, a unique work of art, the Hermitage exhibit. Constructed in 1706 for Russian Emperor Peter I

In one of the galleries of the Hermitage, which keeps the monuments of the time of Peter I, is a military silver ship with silver sails. This boat was made of the first sample of silver produced in 1706 in the Trans-Baikal region in Nerchinsk mines. The main body of the ship has the inscription: “In 1706, by order of Russian Emperor Peter the Great was found the silver metal in Siberia in Dauria province. From the first test purification was made this silver ship. ”

In October 1991, archaeologists discovered the treasure of the Moscow Kremlin, hidden during the invasion of hordes of Batu. Silver jewelry of XIII century was found at a depth of 5 meters near the Spassky Tower. Experts believe that the treasure of the 23 subjects – the most sophisticated ever discovered in the Kremlin. The most interesting is silver butterfly bracelet, a medallion, and beads. On the bracelet engraved images of fabulous birds. Medallion is decorated with blossoming cross and beads made in filigree technique. 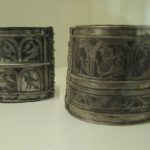 Bracelets. jewelry found near the Spassky Tower of the Moscow Kremlin 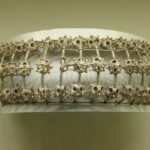 Gold bracelet found near the Spassky Tower of the Moscow Kremlin 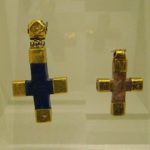 Crosses. Unique jewelry found near the Spassky Tower of the Moscow Kremlin 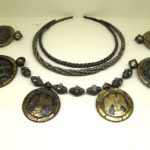 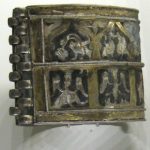 Exquisite work of ancient jewelers. Found near the Spassky Tower of the Moscow Kremlin jewellery 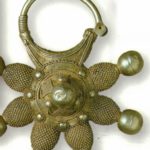 17 silver bars found on the site of an ancient fortress in Alushta, Crimea

During the scientific excavations in the resort town of Alushta in 1990 was found the treasure, the largest ever found in the Crimea. On the site of an ancient fortress Aluston built on the orders of the Byzantine Emperor Justinian in the VI century, the expedition of the Institute of Archaeology found 17 silver bars with a total weight of 3.5 kilograms.