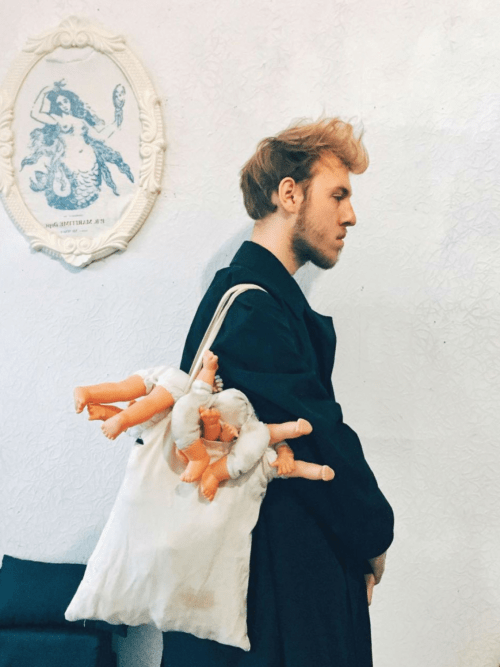 Roma Uvarov is a 21-year-old promising Russian designer who has managed to conquer the catwalks with his creative collections in a short time.

The young designer Roma Uvarov from Maykop started his career in Krasnodar. There he entered the university with a degree in PR and advertising. Roma did not like the Russian state education and he decided that independent development would have a much greater effect.

Non-standard is the main concept of Roma Uvarov’s clothing. Now the young designer has a victory in the Sobaka.ru competition “New estates in fashion”, several shows at Mercedes-Benz Fashion Week and participation in the television project “Podium”.

In Krasnodar, Roman was often engaged in self-development instead of attending university: he read books, studied Photoshop. He never planned to become a designer. The Krasnodar designer Olya Sadova introduced him to the world of fashion. For about two years, he ran the Instagram of her brand, and also created collections, organized shows and communicated with customers.

The first personal collection that Roma tried to create were regular hoodies, which he bought from the New Yorker and printed creative collages on them. They were sold quite successfully. So his own brand, Roma Uvarov Design, began to emerge.

This collection became popular thanks to one charity cause. An acquaintance of Roma was raising money for the treatment of a boy with oncology. The designer began selling his sweatshirts, describing the story of this boy in parallel, thereby helping out money for medical treatment.

The funds from this collection went to charity, but Roma nevertheless set aside a small part for new tailoring, and also invested money from scholarships in this.

THE MOST PERSPECTIVE DESIGNER OF RUSSIA ROMA UVAROV

At the beginning of his design career, before submitting an application for the competition at Sobaka.ru, Roman managed to present his collection in Moscow at Mercedes-Benz Fashion Week. How did he get there? I sent a letter in which there was a story about myself with the postscript “I have no money.” The novel did not receive a reply letter for a long time, until he received a call and was informed that it most likely just got into spam and was expected at Fashion Week.

Now Roma already has his own team, which believes in him and provides support. Not only morally, but also financially, so part of the brand ceased to belong to him. The nearest plans are to go to the world level and conquer the podiums of Europe, which will definitely be helped by talent, professionalism and a strong team.

By the way, in the latest collection of Roman Uvarov Design spring-summer 2019, presented recently at MBFW Russia, the theme of witchcraft and folklore was traced. Models of all ages adorned the catwalk with outfits in both the brightest and most neutral colors. Sleeves made of ears of rye, nurses’ caps, masks, horns, pendants with talismans acted as accessories at the show. In a word, incredible! Guests will remember a very impressive collection for a long time. And also the main trends of the spring / summer season were traced at the show: peas, mesh, fishnets, voluminous shoulders, leather and much more. With his products, the young designer showed all the superiority of his talent. This Moscow show really deserves admiration and respect for Roma’s work.

A sense of style, an interesting view of the world, unsurpassed collections that combine both unique creativity and trends, suggest that Roma Uvarov is the very promising Russian designer who can become the face of the Russian fashion industry and represent it on European catwalks.