Russian artist Sergey Kirillov was born in 1960. Behind the historical paintings is the hard work of the author, his multi-day study of historical materials, many hours of conversation with the largest specialists in history, numerous sketches of the characters and the details of the painting. This approach to creativity began when Sergei Kirillov worked under the guidance of Professor D.K. Mochalsky on the diploma painting “Peter the Great”, at the Moscow State Art Institute named after VI Surikov, from which he graduated in 1984. Sergey Kirillov is the Honored Artist of Russia. His works are in the State Tretyakov Gallery, art museums in many Russian cities. 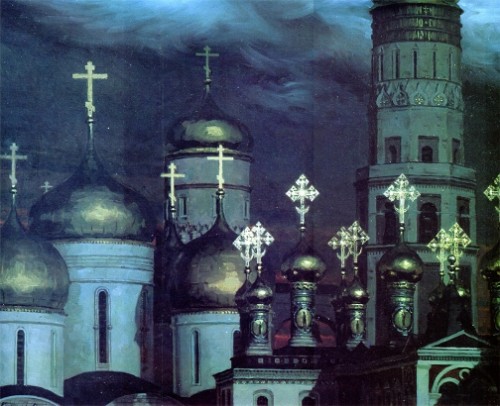 The dome. (Reconstruction of the author). From the series ‘The Moscow Kremlin in the XVII century’. 1990

The second half of the 1980’s – the time of becoming an artist, when Kirillov accessed to two tragic and controversial personalities in the history of the Russian state. From 1985 to 1988 he worked on the movie “Stepan Razin”, from 1988 to 1990 – “Ivan the Terrible”. 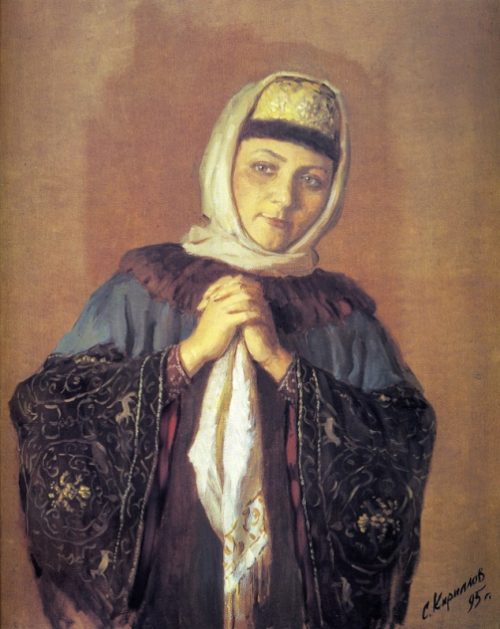 Young woman. Portrait of a series of ‘Russian people’. 1995

The next step in the work of Kirillov – understanding the national spiritual tradition in the paintings of “The Princess Olga/ Baptism/, St. Sergius of Radonezh/ Blessing/ Basil/ Prayer/ combined into a triptych of “Holy Russia” and causing great attraction and pride for our people. 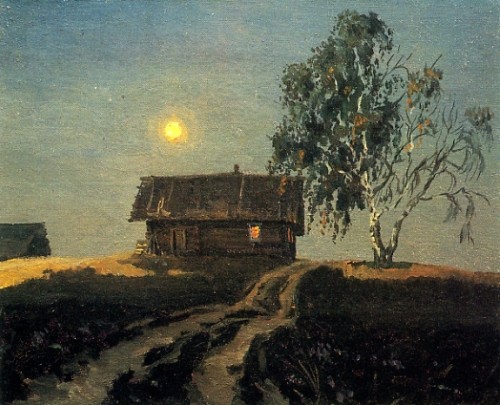 Our ancestors have for centuries sought to combine the historical narrative with an artistic interpretation of the past. So-called “face” (illustrated) records and other hand-written works have always revered in Russia. As time went on, historical conditions changed, and with them, changed graphic styles and means. Iconographic style is complemented with realistic and secular subjects. Portrait painting has taken its place in the cultural life. Despite the increasing chronological distance, the artists did not refuse to implement the canvas with historical paintings of bygone eras. And that’s understandable. Folk wisdom says: “It is better to see once than hear a hundred times”. 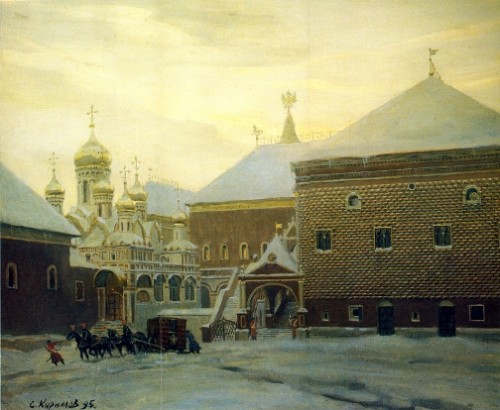 The royal chambers. (Reconstruction of the author. Variant). From the series ‘The Moscow Kremlin in the XVII century’. 1995

Approaching this difficult path, each artist must feel great responsibility for the accuracy, depicted truthfulness. The artist gives something more to the viewer to enter the inner world of people of past times. This is achieved by careful study of historical sources that are relevant to the topic chosen by the artist. In them, he can find those faces that often remain hidden from the historian and researcher. Art-historical album of famous painter S.A. Kirillov meets the criteria of reliability and responsibility of the reader and the viewer, and is the result of years of work of the author with the historical material. Creativity of Sergei Kirillov is an example of a harmonic union of painting and history. No wonder the painting took a well-deserved place in textbooks next to the paintings of the great masters such as V.I.Surikov, Ilya Repin, V.M. Vasnetsov. 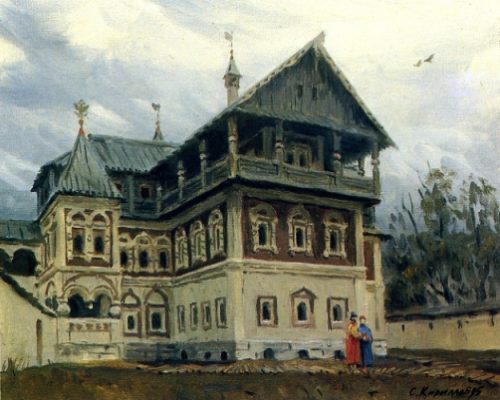 The House of the council Averkiy Kirillov. (Reconstruction of the author). From the series ‘In Moscow XVII century’. 1995

Fame to the artist brought the historical paintings “Stepan Razin”, “Princess Olga”, “Ivan the Terrible”, “St. Sergius of Radonezh”, “Dmitry Donskoy”. Currently Sergey Kirillov is the leading artist and the author of the number of publications on the history of Russia. Since 1987, he held 25 personal exhibitions in Moscow and other cities of the country. 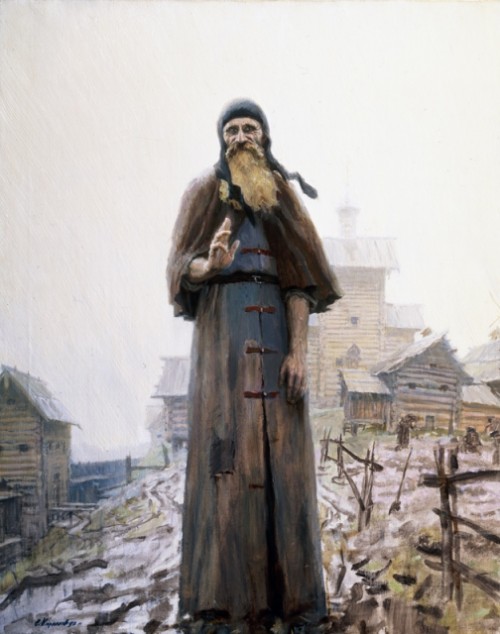 St. Sergius of Radonezh. (Blessing). The second part of the trilogy ‘Holy Russia’. 1992 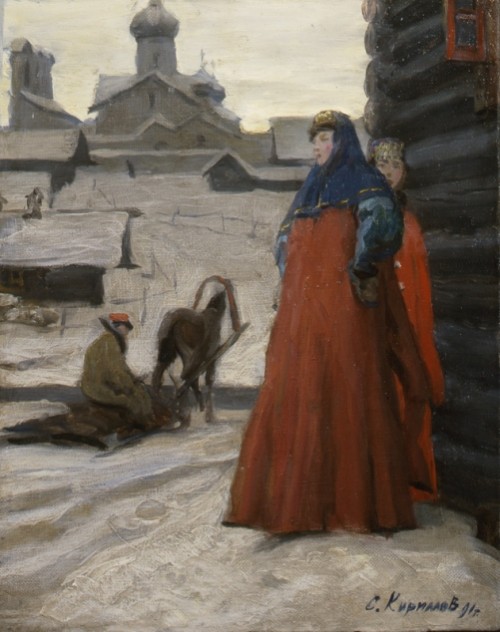 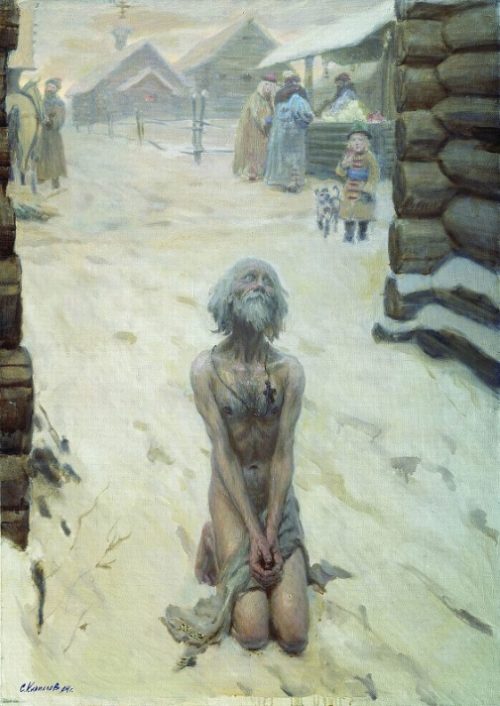 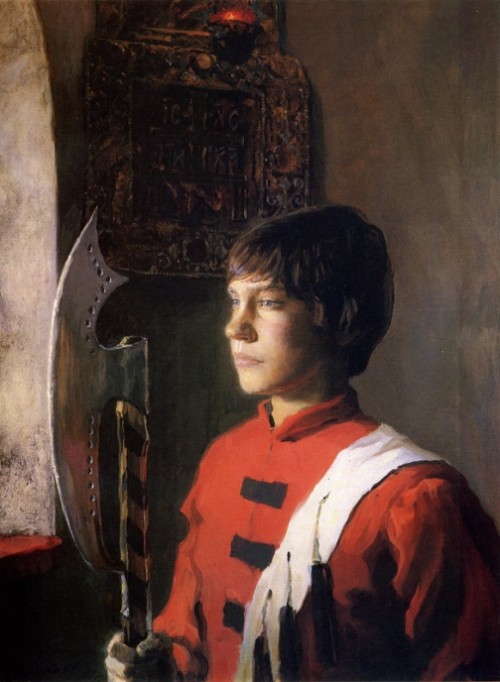 Boy archer. Portrait of a series of ‘Russian people’. 1990 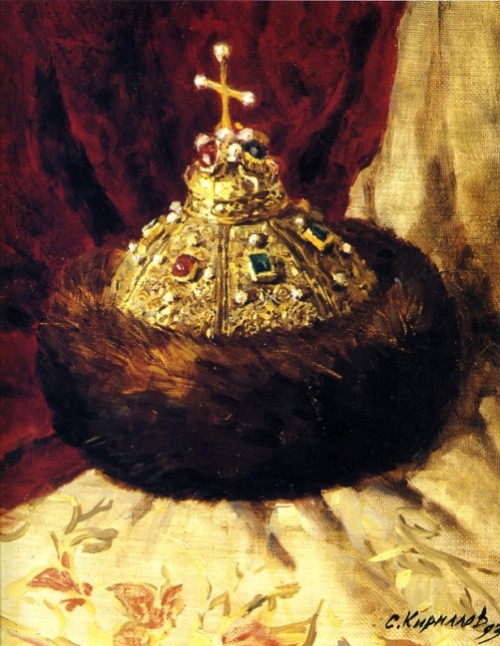 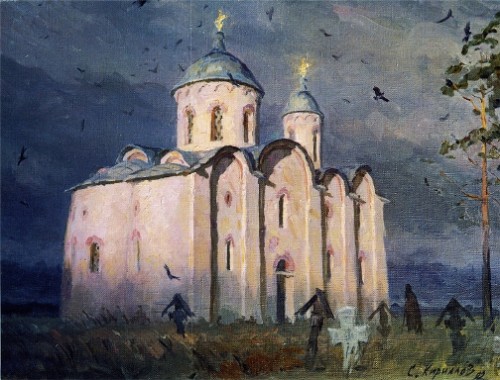 Church of St. John the Baptist in Pskov in the XIII century. 1992 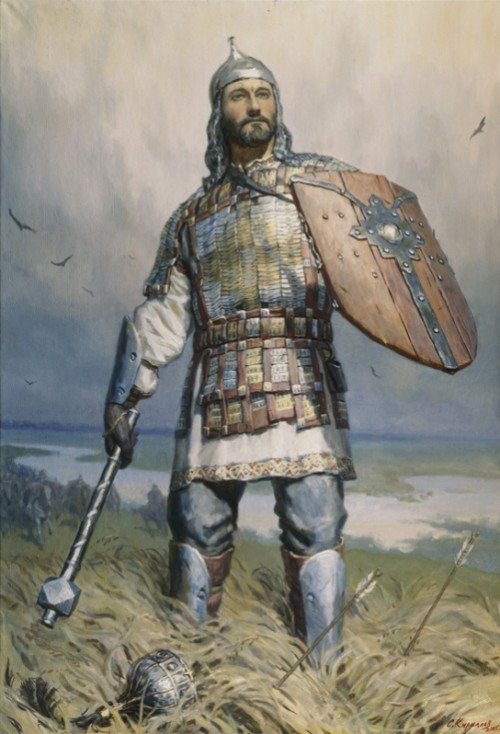 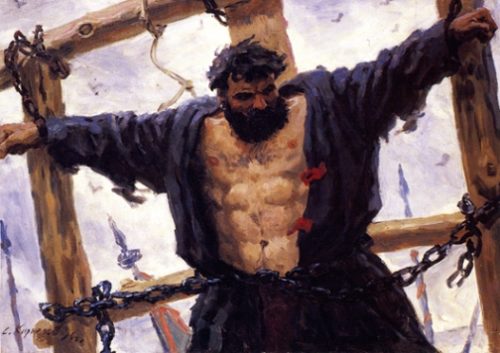 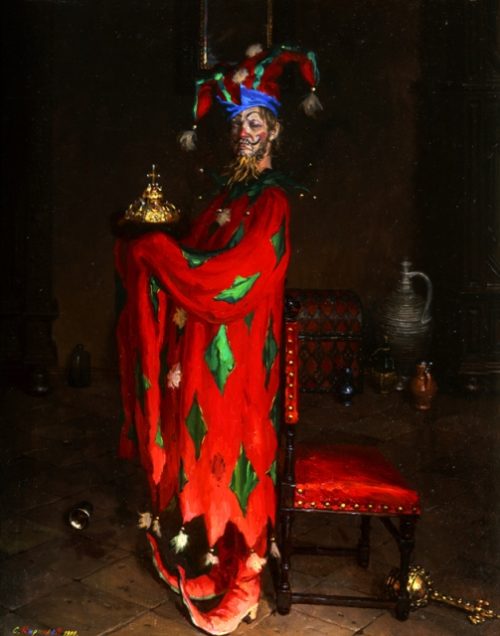 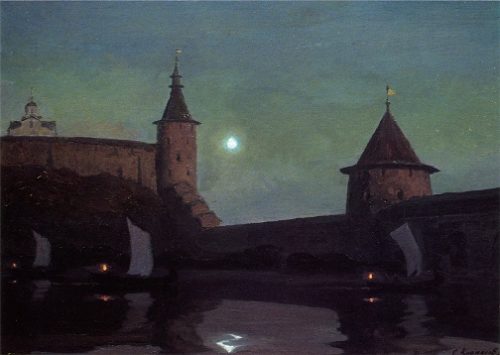 Kremlin. Luna. From the series ‘City of Pskov in the XVII century’. 1990 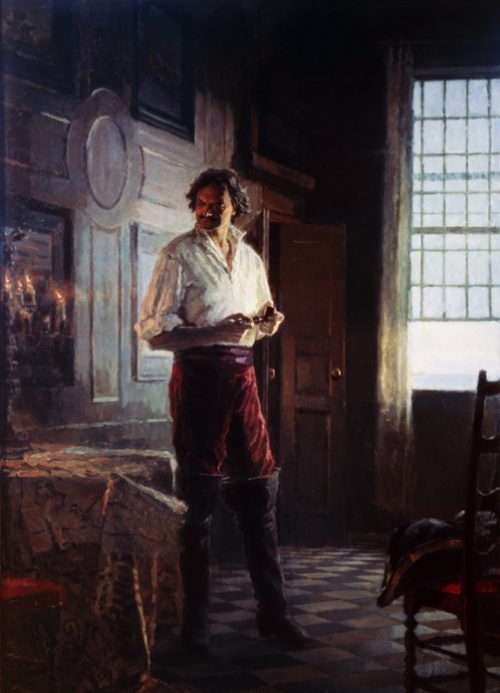 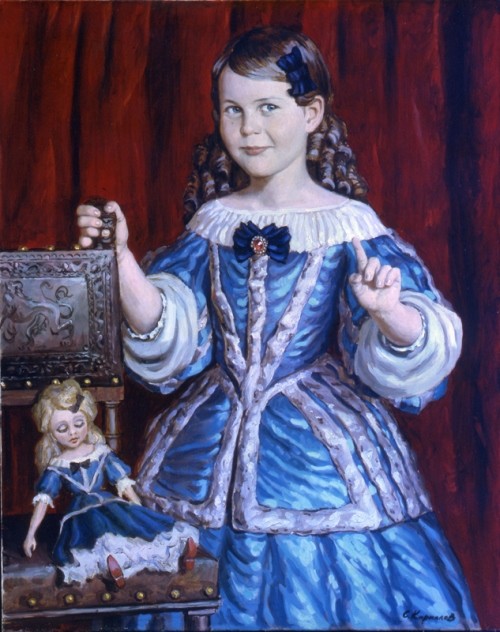 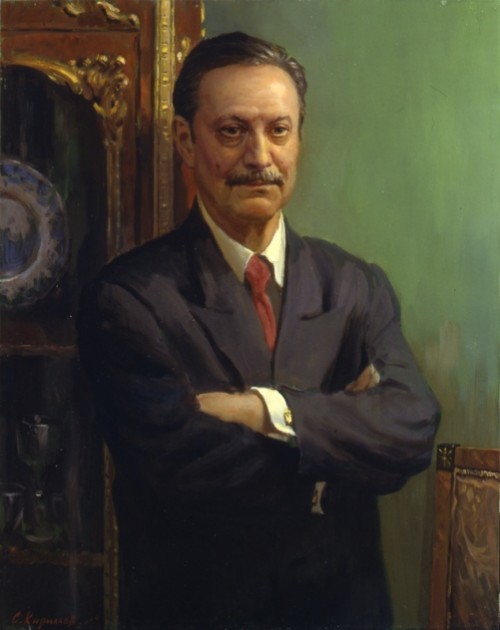 Portrait of a People’s Artist of the USSR Yuri Mefod’evich Solomin. 2000 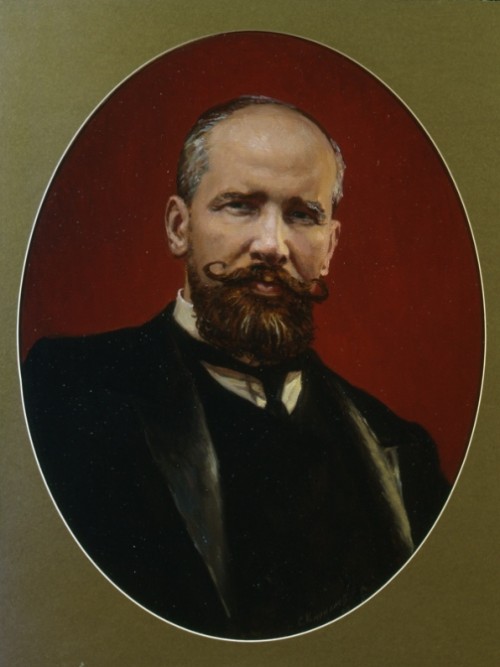 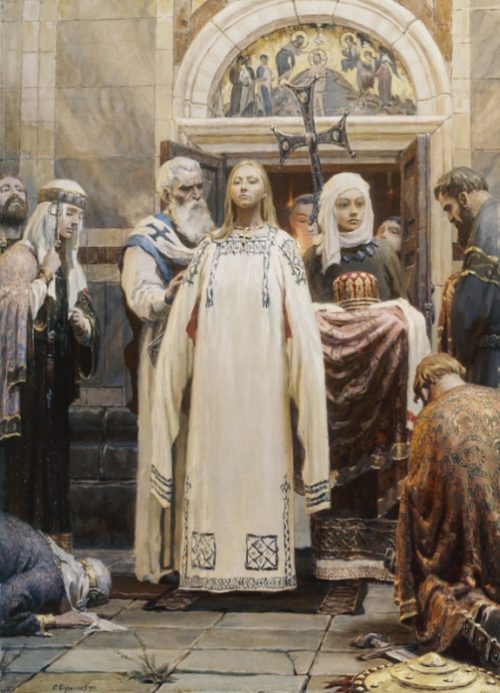 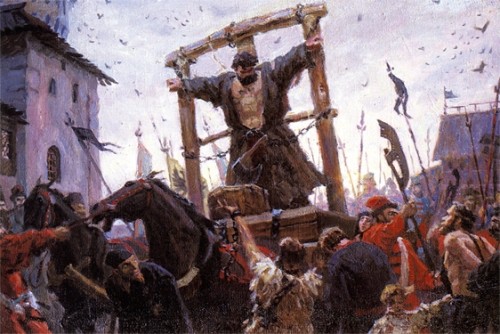 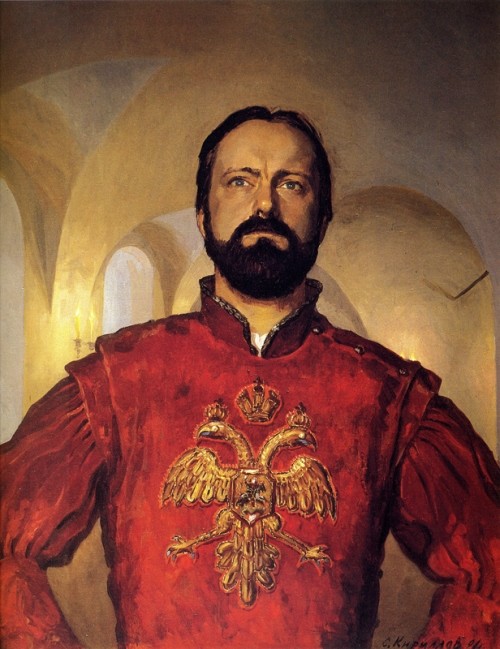 Royal falconer. Portrait of a series of ‘Russian people’. 1992 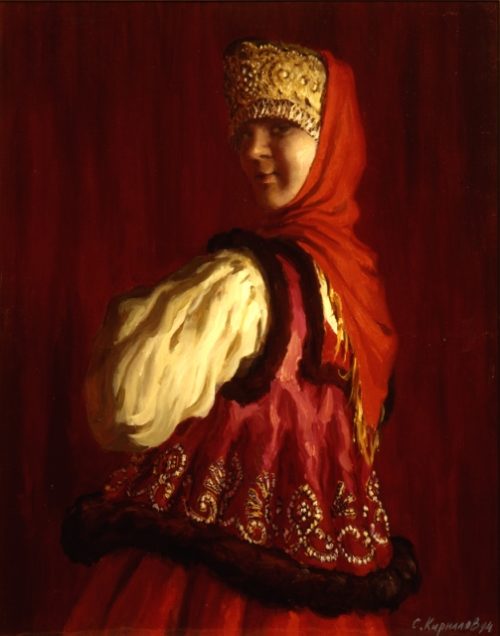 Russian beauty. Portrait of a series of ‘Russian people’. 1994 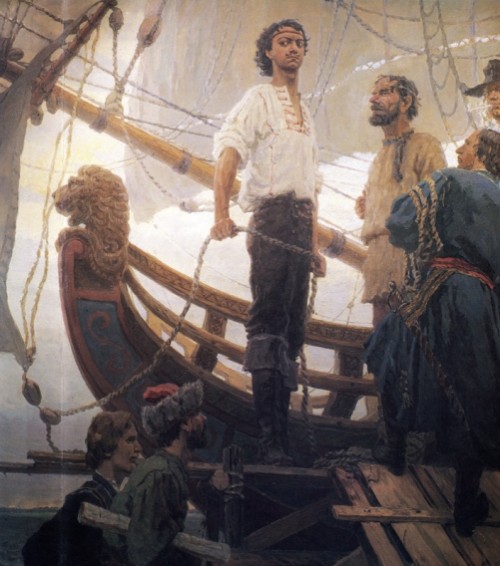 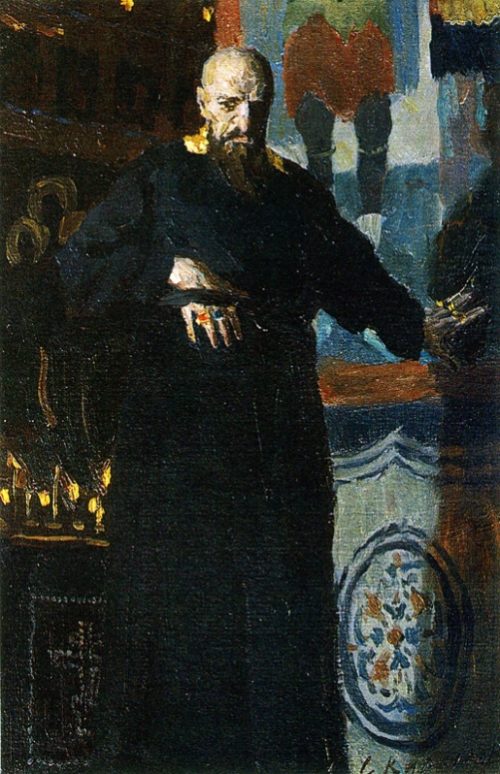