Russian bikers Night Wolves is a motor club founded May 31, 1989 in Moscow. Since 1992 Night Wolves Motor Club has been a member of the international bike movement. Motor Club has many regional offices in Russia, from Far East to West of Russia, as well as abroad – in Belarus, Ukraine, Bulgaria , Macedonia, Serbia, Romania. Motor Club has a strict chain of command fixed by Charter, and employs about 5000 people. Motor Club Night Wolves has “sister club” – aerobatic fighter group “Russian Knights”. The club holds the bike festivals, attracting rock bands. The founder and leader of the club – Alexander Zaldostanov, nicknamed Surgeon, was born January 19, 1963, in Kirovograd, USSR (now Ukraine). Russian President Vladimir Putin met with the club and its leader several times. In the elections of President of the Russian Federation Surgeon was a trustee candidate of Vladimir Putin. In 2013 he was awarded the Medal of Honor for “active in the patriotic education of youth.

The club was founded in 1995, consisted of engineers and enthusiasts engaged in assembly and repair of motorcycles. This unit designed and released the motorcycle “Ural- Wolf”, as well as custom motorcycles. The club produces a line of clothing for bikers «Wolf Wear».

During mass anti-government protests in Ukraine in January 2014, “Night Wolves” guarded the Sevastopol administration of the Crimea, protecting it from possible assault of opposition activists. 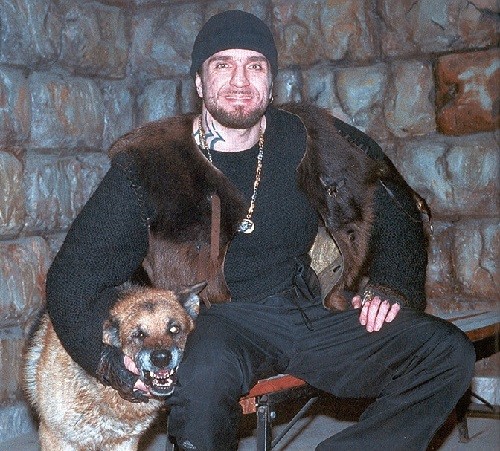 10-11 July 2009 in Sevastopol was a Christian procession with participation of Andrei Kuraev and “Night Wolves” bikers. In December 2009, representatives of Moscow bikers declared their intention to become an informal security of Orthodox church of St. Thomas. April 19, 2012 it was announced that the April 21, 2012 will be held auto-run in support of Patriarch Kirill of the Russian Orthodox Church and the traditional values ​​of Russian civilization, which will be held under the slogan: “Faith, Church, Motherland”, “Russia forever”.