Russian distaffs occupy a peculiar position among the objects of folk art. It would be difficult to name any other tool used in a peasant household on which more loving care was lavished, to make its shape as perfect, and its decoration as beautiful as possible. People’s imagination has created a variety of shapes for the distaff. There is the monumental spade-like tool, the petal-shaped one on a slender figured leg, and the distaff in the form of a tower, resertibling some graceful work of architectural fancy. 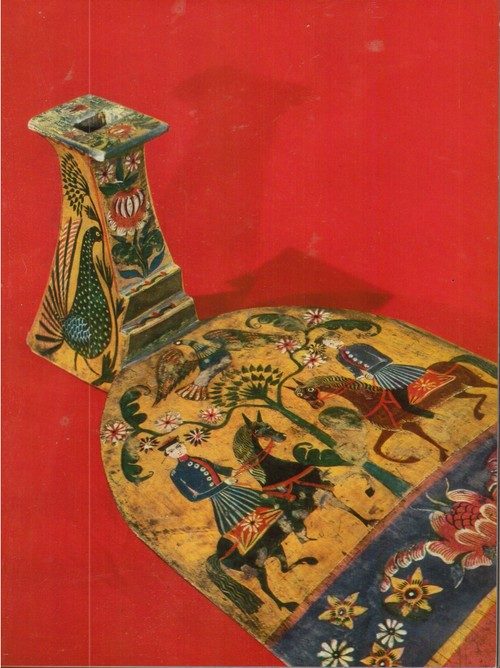 Distaffs were made in each family. A peasant girl learned to spin in her early childhood, and this work was her lot through life. Among the people, the attitude towards the tiring toil of the spinner was one of understanding and consideration. There was a custom for the village women to assemble and do their spinning in company. In winter they would gather of an evening in a house roomier than the others, the married ones wearing their best clothes, the girls with their beautifully ornamented distaffs. They were joined by the young men of the village, and the work went on amidst jokes and laughter, singing and general merriment.
Another custom was to make presents of distaffs. A distaff was a father’s gift to his daughter, a young man’s to his fiancee, a husband’s to his wife. Touching inscriptions were made, such as “Thee I love, to thee I give; with love from my heart, to thee for all time”, or “Spin, preserve the distaff, and pray God for thy father”. Distaffs were kept in families as heirlooms, and handed down from mother to daughter for generations. The most skilful of distaff makers manufactured their productions both to order and for sale at fairs. In areas with long-standing traditions of woodwork, — in the neighbourhood of large villages carrying on a brisk trade, in villages situated on the banks of navigable rivers, or along busy trade routes, — there arose centres of the production of distaffs. In the eighteenth and nineteenth centuries such centres were known in the Yaroslavl and Nizhny Novgorod governments, and in the Northern regions of Russia. 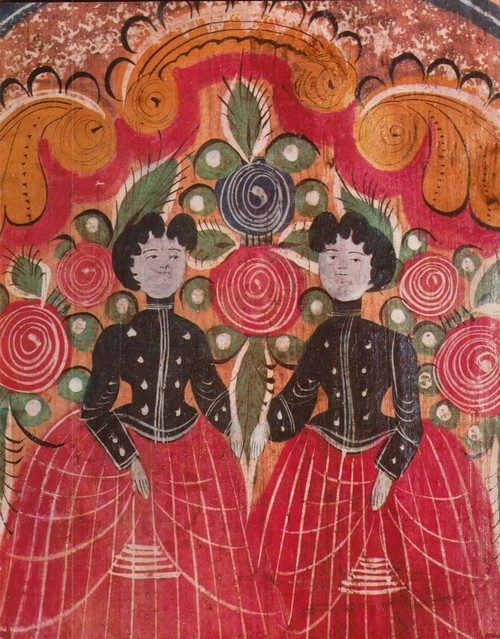 The techniques of carving and methods of decoration varied from place to place. They were closely linked with local artistic tastes and traditions. In the ornamentation of carved distaffs, geometrical designs prevailed. In painted decoration, such motifs as a bunch of flowers, or a flowering shrub, were dominant. Plant motifs might occur in combination with scenes of country or town life, and sometimes with figures of animals and birds. Scenes of daily life, marked by keen observation and rendered with a sense of humour bordering on the grotesque, form a characteristic feature of Russian folk art. In the nineteenth century such scenes were used as a matter of course in decorative compositions on carved distaffs of the Yaroslavl and Nizhny Novgorod masters, and of painted distaffs made in the Nizhny Novgorod, the North Dvina and the Mezen regions. Russian distaffs possess every charm of Russian folk art.
The evolution of folk art in the course of history has left its traces on the shape and decoration of the distaffs.
The present album has been composed on the basis of the collections owned by the Russian Museum (Leningrad). It illustrates almost every type of artistically executed distaffs known in European Russia.

Carved distaff of the “terem” type. Detail. First half of the 19th century. Yaroslavl region.

Distaffs. Second half of the 19th century to early 20th century Olonets region.

Painted distaffs. Details: picture of the ship The Mezen and a shooting scenc. Second half of the 19th century to early 20th century. The Mezen. Archangel region.