Russian spring festival Maslenitsa serves many purposes. Maslenitsa signals the end of winter and the coming of spring. As a part of pre-Lenten celebrations, it is also a pre-emptive strike to the upcoming fast. Because meat and dairy would traditionally be forbidden, Maslenitsa is the time for feasting (especially on pancakes). The name of the festival has its roots in the Russian word for butter, “maslo.” Traditions of Russian spring festival Maslenitsa – Troika rides, sledding, theater, puppets, singing, and fireworks are all a part of the Maslenitsa celebrations. There is usually a “storming” of a snow fort. That these traditions are still alive today is a testament to Russians’ long memory and preservation of their heritage. All in all, Maslenitsa is a good excuse to go out and have a good time, eat until you burst, and do something you wouldn’t do any other time of the year. 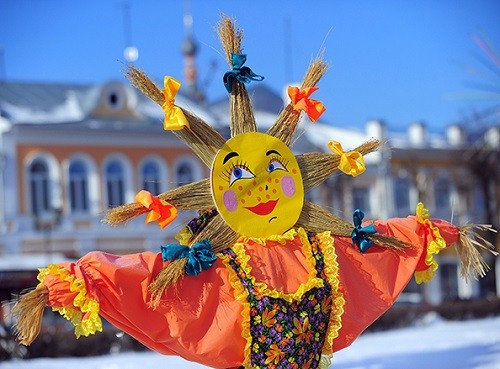 Blini are Russian pancakes, and they are essential to the celebration of Maslenitsa. Said to symbolize the sun – being warm, round, and golden – they are an appropriate warning to the cold weather. Blini are given to friends and family all through the week and are topped with mushrooms, jam, sour cream, and of course, lots of butter. 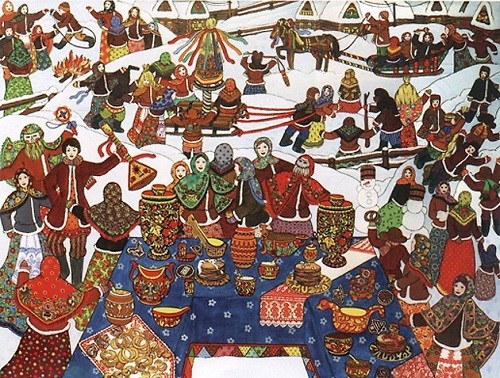 Group fistfights are undertaken during the week of Maslenitsa. It is a part of the interesting absurdity of Maslenitsa. Fist fighting commemorates Russian military history, when soldiers supposedly fought each other in hand-to-hand combat. 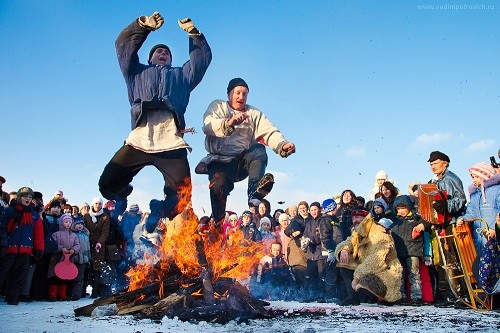 Bonfires will be lit and a straw personification of Maslenitsa may be burned during the festivities in order to say farewell to winter and to complete the welcome of spring. 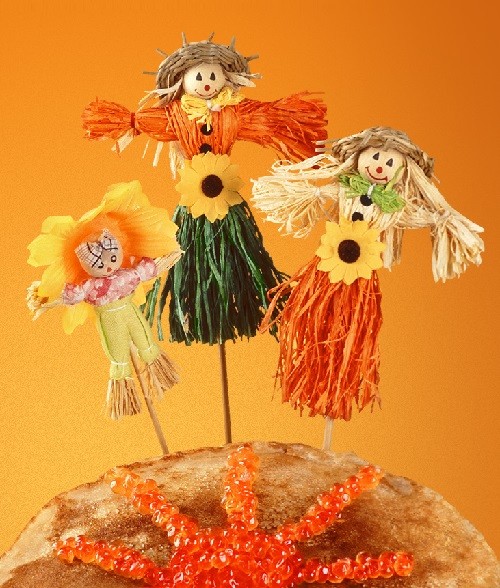 Its roots go deep into the pagan culture. These seven days precede Lent. In ancient times, it was czar who decided the official beginning of Maslenitsa. He attended all prisons and alms-houses and made considerable donations. Afterwards, he attended a mass at the cathedral plaza right by the Moscow Kremlin. The next day, people would flood the streets and celebrate the feast, Pancake Feast. 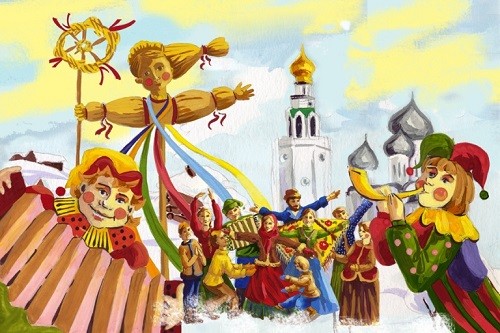 The holiday signifies a symbolic farewell to the long and boring winter. In fact, Maslenitsa is winter itself and people try to get rid of it. Easter in turn symbolizes the approach of the spring. Therefore, as it turns out, Lent is a middle ground between a “farewell” and a “meeting.”
A sleigh-train which is often led by several decorated horses consisted of many sleighs. In Western Siberia, for instance, such “train” was also equipped with masts and sails. The leading sails had a log inside, which was attached to a wheel. “Maslenitsa” was sitting atop that wheel. This was an aged, slightly drunk man, fully covered with besom used in Russian baths, and armed with Russian famous musical instrument Balalaika. 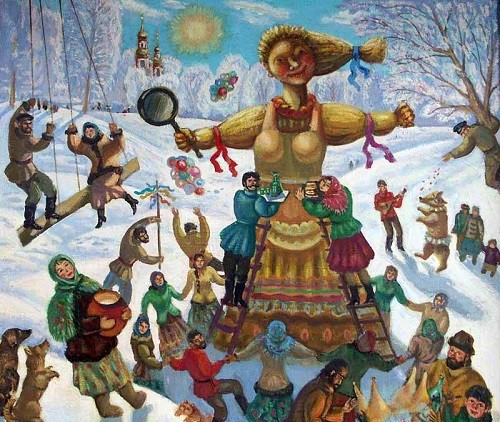 In other villages, people would place scarecrows in sleighs. Obviously, this wasn’t as much fun as a live person. 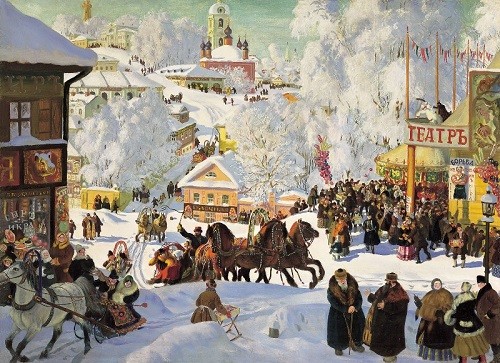 Monday. People start making “baked suns”, or blini (Russian pancakes). Most often, the all-knowing mother-in-law was leading the process of cooking. She would use only her own, personal “equipment”: a trivet, a frying pan and a special vat for the dough. Her daughter, in turn, had nothing else to do but to watch her mother’s craftsmanship. 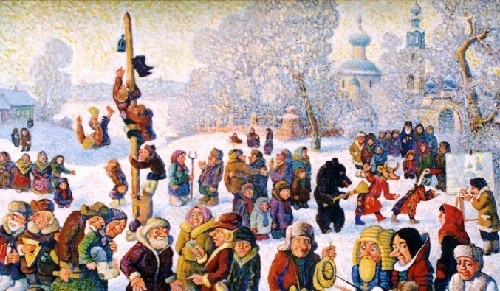 On Tuesday, people usually visit their friends and host parties at their homes. Young men are scouting their future wives and ladies search for their future husbands. 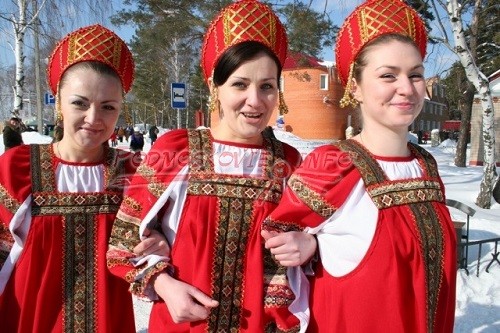 Wednesday is a real feast.

The next day (Thursday), everyone would go outside and participate in fistfights. In ancient times, even women participated in those fights. Interestingly, broken jaws, broken ribs, arms and fingers were all regarded as a goof omen.

Friday. This day is often called “an evening with a mother-in-law”. Respectful sons-in-law would visit their mothers-in-law on this day and enjoy a delicious meal in each other’s company. 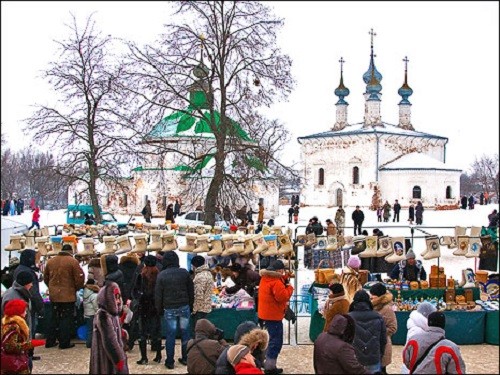 Saturday is a women’s day! Girlfriends gather together to discuss their problems, while men are eating delicious bliny. 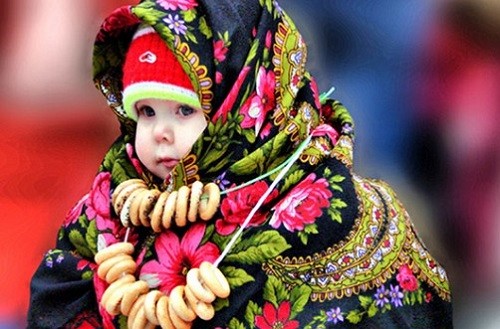 The next day, Sunday, is called “Farewell” or “Forgiving Sunday”. Once again, everyone gathers for an unforgettable sleigh ride. Afterwards, people prepare a scarecrow and burn it. It is immensely important to ask your relatives, friends, loved ones for forgiveness on this day. 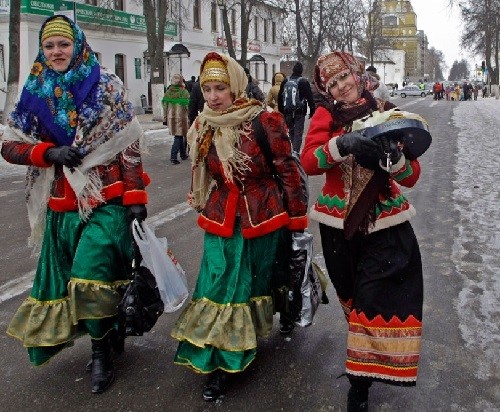 The next Monday is considered to be “Clean Monday”. It signifies the official beginning of Lent…Lent is often viewed as a way towards an everlasting Spring, towards Jesus’ resurrection… 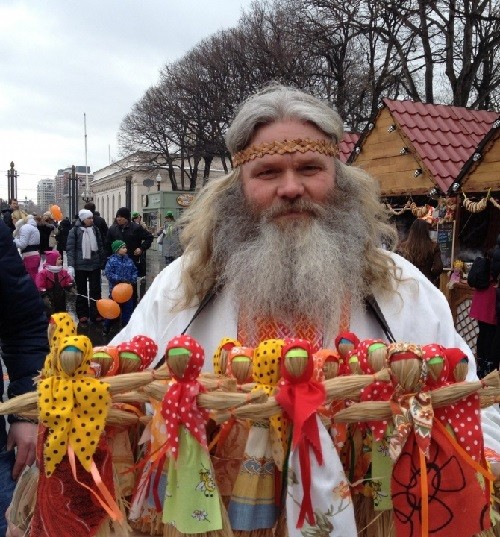 In the ancient times in Russia during Maslenitsa the Petrushka (Punch) comedies were quite popular. Sometimes it even so happened that several Petrushkas performed one and the same comedy several times on end on one and the same day. 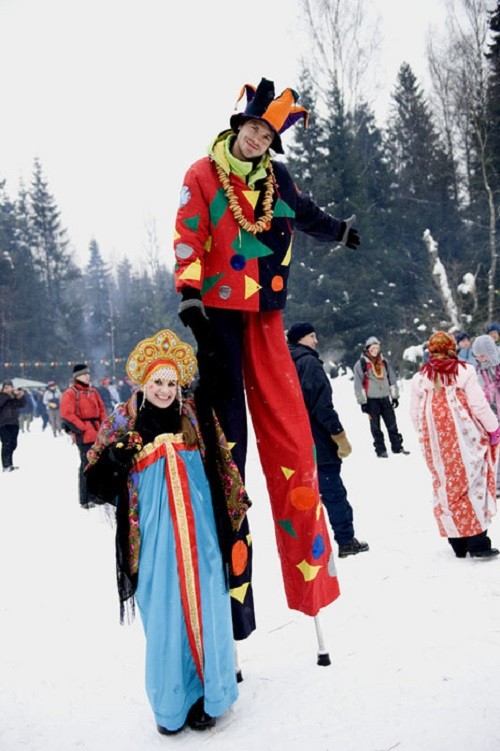 Petrushka’s comedies’ success lied on the one hand in their relevance and on the other hand in their satiric character. They were quite charming and understandable because of their simplicity to most of the people of all ages and mentalities. 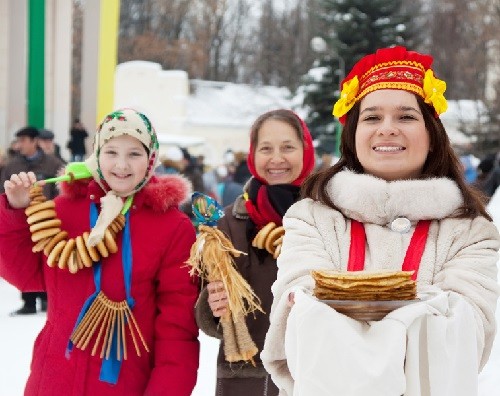 Usually such performances began with a loud laughter or a song from behind the curtain and after that Petrushka appeared. He was clad in a red shirt, velveteen trousers tucked into the dandy boots and wore a fancy cap on his head. The indispensable details of his appearance were one or two artificial humpbacks and a long crooked nose. 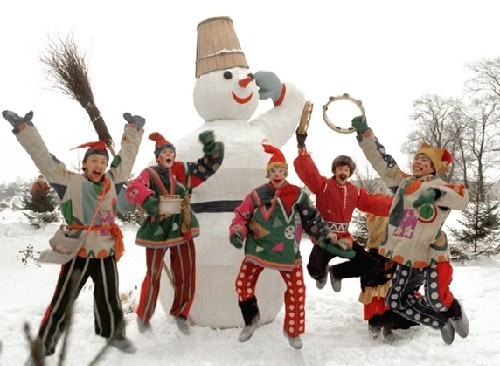 The center of the Maslenitsa Square were Balagans (show-booths).
Maslenitsa balagans were the main attraction though not always affordable.
Balagans were the face of the carnival. The number of balagans, the pomposity of the finery and the names of their promoters – all were the signs of the degree and importance of the event.
Initially the word “balagan” meant “an upper extension of a building”. In the beginning of the XIX century the word meant “a convertible shopping construction”.
The term acquired the nowadays meaning, which is a construction for traveling shows, or booths, only in the second half of the XIX century.
Professional actors, state functionaries, craftsmen, as well as circus actors performed on these light theatrical constructions. 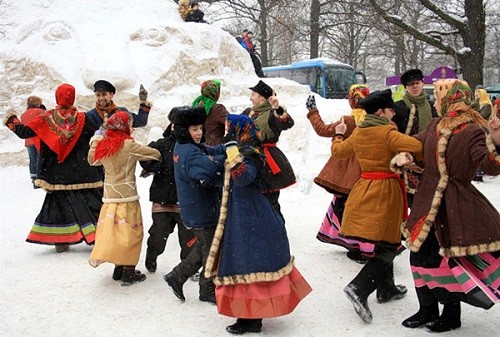 During the reign of Empress Elisabeth the Maslenitsa festivities were arranged in her favourite Pokrovskoye village and included tobogganing not only for common people but for the Empress as well. This tradition is still extant in Russia. But it is unlikely that anybody remembers that sledging is not just an entertainment, but also an ancient ceremony. In the old times people thought that the more you slid the higher would be your flax.

The sleighing hills were built of snow and were decorated with two fancy turrets having fancy flags on their tops. Along the way down the hill stood two rows of fir trees substituting the barriers with statues of ice and snow between them. 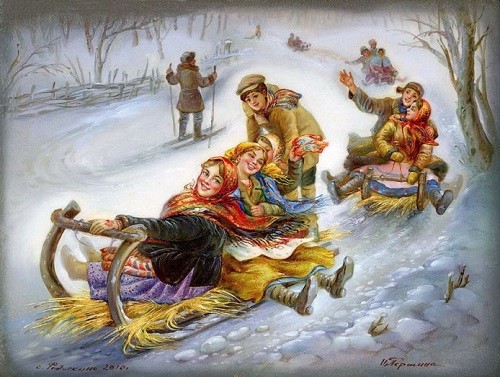 In the beginning of the twentieth century one Russian historian remembering his childhood thus described Maslenitsa sleighing, “On Saturday after the pancake feast we used to go tobogganing to the Zoological Garden where there were our sleighing hills. They were built of snow and wood and were covered with ice. These were very high hills on the ponds. Flags on top of the plank pavilions standing on the hills flatter in the wind. High coaches slide along the ice tracks going between the snow arbors with fur-trees driven into them. The hills are crowded. Sedate carpenter Ivan helps Pavel the clerk to cut and hand the tickets. The tickets say: “Once from both ends”. People form a long row before the ticket window. 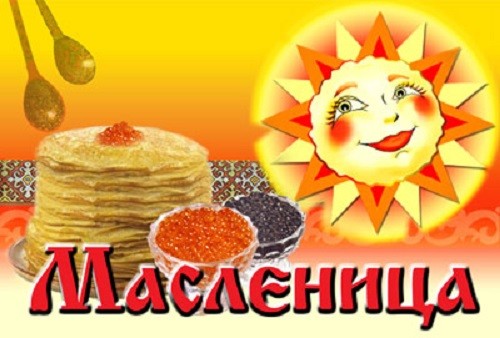 Dough – 2.5 glasses; eggs – 4 or 5; sugar – 100 g; butter – 200 g; milk – 3 to 4 glasses.
For the simple thin pancakes the dough is prepared of dough, milk, eggs and salt.
First thing you should do is separate the yolks from whites.
Then stir the yolks with sugar slowly adding milk whilst stirring.
Then add the salt and the melted hot butter.
Then start adding the dough (very slowly), stirring the mixture and smoothing the dough nubbles.
As the last step, add the stirred whites.
Now everything is ready for baking pancakes on the hot frying pans.

Flour – 1.5 glasses; milk – 3 glasses; eggs – 2; potatoes – 400 g; sugar – 100 g; bulb onion – 1 bulb; butter – 200 g; salt and red pepper.
Mix milk, eggs, dough and spices.
Stir the dough and leave in a warm place for five minutes.
Meanwhile, slice the onion, shred the potatoes on the shredder and then add them to the dough.
These pancakes should not be too big.
Bake them on a low flame on both sides until the formation of crust.

Dough – 60 g; white sauce – 50 ml; eggs – 1; sugar – 1 teaspoonful; vegetable oil – 10 g; bread crumbs – 10 g; tomato sauce – 50 g.
Warm the very viscous white sauce, mix it with the dairy curd and add some salt, pepper and then make doughnuts of this mixture.
Then shape them like a cigar.
Then roll the dough into a layer no more than 0.5 mm thick and slice it into checkers 5 to 7 сm long and moisten them.

These are the burrito-like pancakes with stuffing like chopped eggs, mushrooms, chopped vegetables and the like. Thus, such pancakes are some sort of equivalent of doughnuts, or the ancestors of a closed pizza.
They are baked in the following way.
Take a frying pan, put some butter and pour on it the ready dough, but a bit less than usual.
When half ready, put the stuffing onto the pancake and pour the new portion of dough above it so that the stuffing be completely covered with it.
Then turn the pancake and bake until ready. 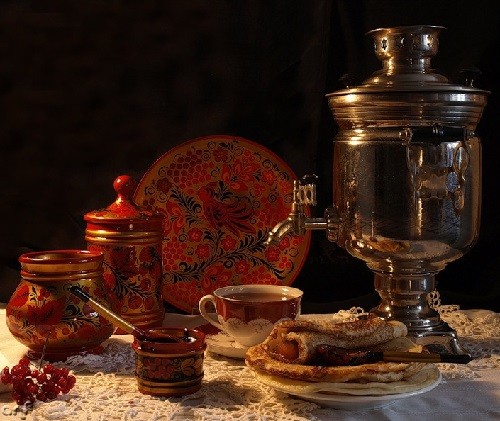