Sergey Svetlakov is the brand known to millions of people in Russia.

He was born December 12, 1977 in Sverdlovsk (now Yekateringburg). Russia’s comedic and dramatic actor, writer, broadcaster, and a former member of the KVN team (team of humorists) “Ural dumplings”. As a child, Sergei was noted for his artistry, who could easily make people laugh. He finished school number 2 in Yekaterinburg (now Gymnasium 155). In addition to academics, Svetlakov played football and basketball, and even became a candidate for the master of sports of handball. Such successes made him see his future not only related to sports. However, Sergey’s parents insisted their son to become a follower of their professional activity. His father was an assistant engineer, and his mother worked in a traffic control.

Sergey Svetlakov graduated from the Urals State University (USURT) in Yekaterinburg in 2000. While still studying at the university, he organized KVN (humor) team, in which Sergei became a captain. Sergei Svetlakov played in the team for about two years, during which KVN had become his occupation of the first importance. In addition to his studies at the university, he worked as an author with a popular team “Ural dumplings.” In 2000 his team became the champion of Major League of KVN.

After moving to Moscow, Svetlakov together with Garik Martirosyan, Semyon Slepakov, Arthur Tumasyanom and Sergey Yershov, wrote scripts for KVN. This creative team started the Comedy Club in Russia. Besides, a big success for Svetlakov became the appearance in the “ProjectorParisHilton” TV program in 2008. He performed there along with others – Ivan Urgant, Alexander Tsekalo and Garik Martirosyan. The program is one of the most successful projects of the First Channel, and received four awards of “Taffy”. In 2009-2010, Sergey was one of the protagonists of the “South Butovo”. 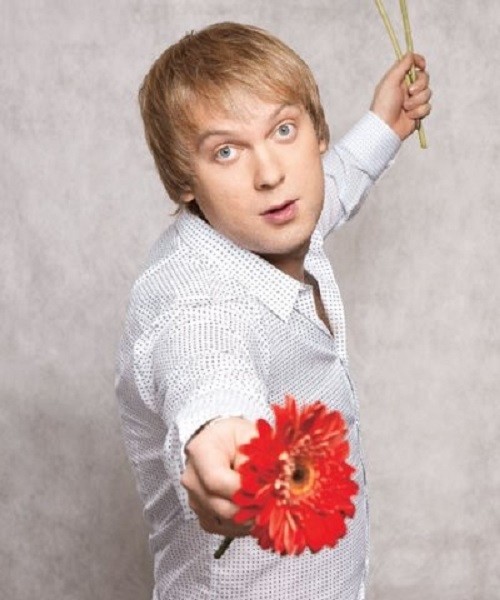 But the real fame came to Svetlakov after the release of the TV project “Our Russia» on the TNT channel. The project in which played only two actors – Sergei Svetlakov and Michael Galustjan, immediately became the favorite of millions. In this project Sergei played different characters, from a homeless beggar to a member of Parliament.

In addition, his roles included a foreman, professor of St. Petersburg Zvyagintsev, TV viewer Sergey Belyakov from Taganrog, football referee, and a miller gay Ivan Dulin from Chelyabinsk. Viewers laughed at his other brilliant roles – teen Slavik, a prostitute Elvira, traffic police inspector Nikolai Laptev, MP Yuriy Venediktovich Pronin, school teacher Snezhana Denisovna, homeless Siphon from Rublevka, and a manager of the sushi bar in Ivanovo. And other roles – Gena – a tourist from Tagil, Sergeant Ermolkin, a doctor, and a retiree. By the way, one of the characters in “Our Russia» – deputy Yuri Venediktovich – Sergei named in honor of his father. Thus, he gave him his “TV hello”.

In November 2012 Sergey Svetlakov obtained a residence permit in Latvia and won a two-story house in Jurmala. His first wife – Julia Svetlakova was his classmate at the university, and they together moved to Moscow. With his first wife Julia, with whom he had lived for 14 years, Sergei divorced in December 2011. Their daughter Anastasia Svetlakova was born December 12, 2008, and the same day as her father. At the moment, Sergey Svetlakov is married. From his second marriage he has a son Ivan. He met his wife Antonina Chebotareva at the premiere of the film “Stone” in Krasnodar, in December 2011.