Russia has always been famous for its athletes, the achievement of whom astounded public. Portraits of Russian strongmen – Pyotr Krylov, Fyodor Besov, Grigory Koshcheyev, Yakuba Chekhovskoi adorned the pages of sports magazines, on poster stands, in shop windows. Their contemporaries knew them better than we do – the astronauts. Athletes and wrestlers shook the audience with their power tricks, they were legends. They performed in circuses and fairs, sports arenas not only in Russia but also abroad, were the pride of the country. Their heroic fun brought to people great pleasure. Among the audience were those who checked their props, weights, weight and strength, always making sure – all is true, without deceit. Now let us remember at least some of the famous Russian heroes athletes. 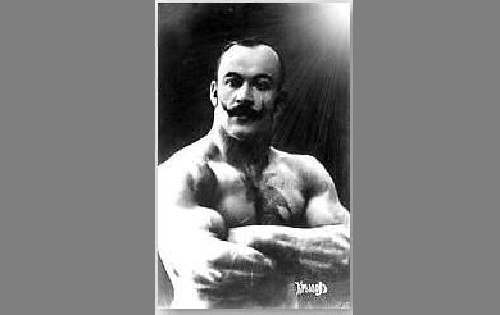 Pyotr Krylov (1871 – 1933) – The King of Kettlebells, Muscovite, who changed his profession of merchant fleet navigator to the profession of athlete. Pyotr Krylov graduated from St. Petersburg Naval College. As a navigator of vessel he visited India, China, Japan, England. And everywhere he trained hard in preparation for public performance. Link to the circus was stronger than commitment to the sea.
Pyotr Krylov, later known as Pierre Kryloff, went through all stages, from performing at the trade fairs and the “booths of living miracles” to large circuses and French championships.

Pyotr Kryloff began training in the athletic club of Sergey Dmitriev-Morro. Then he made his own gym in the basement. He bought a barbell, kettlebells and coached himself. Pyotr Kryloff began working in circus. He already had 41 cm biceps and was working all day long lifting barbells, kettlebells, wrestling etc. The audience always liked to touch kettlebells or chains to ensure that they were real.

He could bend the rail on the shoulders, car travel through the body, lift platform with a horse and rider, break stones with his fist, … and gave lectures on physical culture. Under the “March of the gladiators” on arena appeared a short man with a striking relief of muscle. Circus entertainer explained – biceps – 46 cm, the neck – 55 cm. Have fun talking with the audience, Peter raised a special platform with a horse and rider, then – two dozen people on it. Blow of his fist smashed a few boulders. Broke two horseshoes. Of thick iron bars he tied “knots” and “bangles”, held on the chest car, made a “cross” holding weights.

Pyotr has repeatedly won prizes in the championships of the French struggle, set several world records in weightlifting. And in his spare from performances time lectured on the importance of physical development, shared his experience with youth. Unique hero stopped performing at the circus when he was 60 years old. 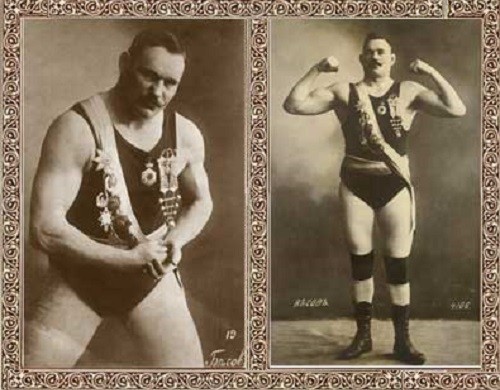 Famous throughout Russia Fyodor Besov showed prodigious power tricks – tore chain and a deck of cards, blindfolded juggled pound weights, broke with fingers copper coin. On his shoulders bent metal beams. Once, at the end of his performance offered volunteers to fight with him. Suddenly he heard a bass: “I’ll try!”. In the arena appeared six-foot bearded man in a linen shirt and sandals. As a result, a grlorious athlete was put on the blades, to the great surprise and joy of the audience. The hero who won the fight, was the famous local athlete Grigory Kashcheyev, a man of enormous growth. Shoulders of the athlete barely passed through the door.

Fyodor Besov realized that he had met a true nugget, he had long urged Grigory to act together. He finally agreed. Life was not easy for the power duo. Constant travel, performances in the rain and scorching sun. Had to endure great physical exertion. 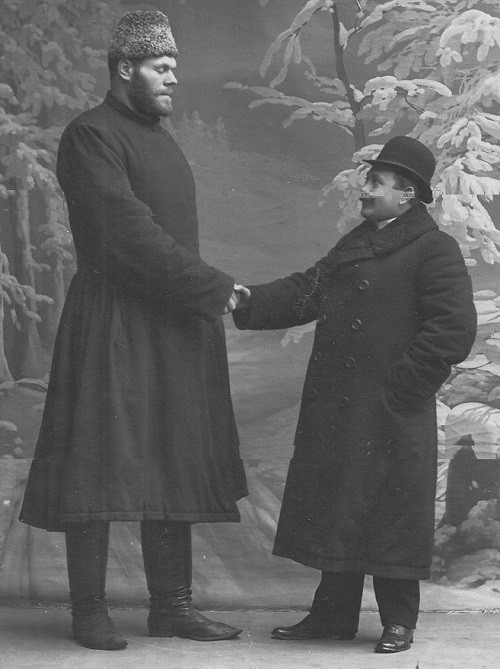 In 1906 during fights with world-class fighters Grigory put on the blades many famous athletes. In 1908, along with two Ivans – Poddubny and Zaikin – he participates in the World Cup athletes in Paris. Our heroes returned home with a victory. It would seem that Grigory Kashcheyev is accompanied by a huge success in the prime of wrestling career. However, Grigory left circus and returned to his native village. Chief editor of the sports magazine “Hercules” IV Lebedev wrote: “I’ve seen a lot of the original people, nevertheless, the most interesting by nature I must consider the giant Grigory Kashcheyev.” In the June issue of the journal in 1914 explained: “If in his place was another, more greedy for money and fame man, he would have made a world career. But Grigory was a Russian peasant-farmer, irresistibly drawn … to the ground.”

Grigory Kashcheyev enjoyed tremendous success. In 1906, he first met with world-class fighters. Became friends with Ivan Zaikin, who helped him master the techniques of French (classical) struggle, Ivan Poddubny and Georg Lurich. In just three years Kashcheev made his European name, started a real wrestling career, but he often missed the village and said, “I’ll leave the circus. I’ll be back home, I will plow the land.” And left … 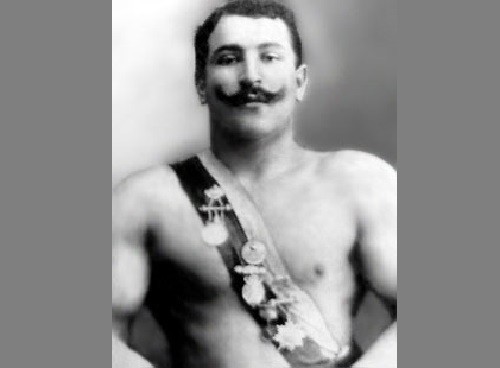 Yakuba Chekhovskoi was a phenomenal athlete. Performing in 1913 in the former Mikhailovsky Manege in St. Petersburg, he showed a sensational power trick – carried on the one hand six soldiers Guards weighing more than 440 pounds, for which he was awarded an honorary gold belt. To repeat this record could nobody. On the chest of the athlete put special platform on which was placed a brass band of 30 musicians. Another time, making a “bridge”, he kept on himself 10 people.

Yakuba Chekhovskoi was known as a public figure. He headed Sports club, universal education in St. Petersburg, formed the first Soviet sports teams. In addition, was an avid bibliophile. Together with circus performers at his home often gathered writers and scholars.
Yakuba Chekhovskoi finished sports activities at the age of 58 years, making a farewell performance at the Minsk stadium “Dynamo”. It was the summer of 1937. All proceeds from the presentation on the initiative of Yakuba were sent in favor of orphans – children of Spanish patriots who died in the Civil War. 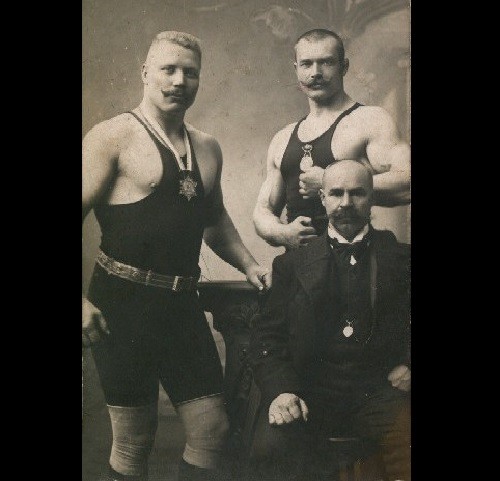 In childhood and adolescence Ivan Zaikin experienced hardship and poverty. He had to work since the age of 12 years. In his youth he dreamed of becoming as strong as his father – known on the Volga fist fighter. Soon luck smiled at him when he came to work for millionaire merchants brothers Merkuliev in Tsaritsyno, where they kept the athletic arena. From this arena started the career of champion wrestler Ivan Zaikin. In 1904 the Merkulievs sent him to the All-Russian Amateur Championship, where Zaikin won the first prize. Starting this year, he became a professional athlete and fighter.

Versatile man, Ivan Zaikin was a friend of Kuprin, Gorky, Chaliapin, Blok, Alexei Tolstoy, Kamensky. Zaikin was also friends with Rasputin. And when Rasputin was wounded with a knife by a resident of Tsaritsyno, Zaikin sent him a letter: “I pray to God to strengthen your mental and physical health.”

From 1928 until his death he lived in Kishinev, Bessarabia, then owned by Romania, after 1940 – the Soviet Union. He organized “sports arena” – an ensemble of professional athletes, wrestlers. Their performances had spectacular and educational focus. Beautifully composed, strong and agile warriors were excellent agitators for physical culture and healthy lifestyle. July 20, 1930 during the execution of the stunt “Living Bridge” he seriously injured shoulder and head; other serious injury happened in Ploiesti, when he took part in a wrestling tournament, 1934 in Riga.

November 22, 1948 at the 69th year of his life, Ivan Mikhailovich Zaikin died. He was buried at the Central (Armenian) cemetery in Kishinev. 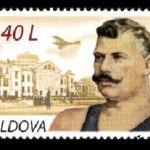 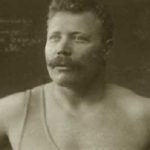 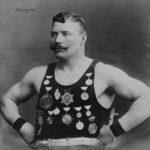 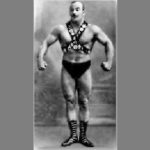 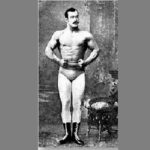 The King of Kettlebells, Pyotr Krylov 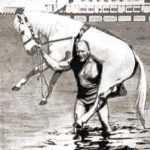 Carrying a horse on his back, Fyodor Besov 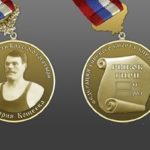 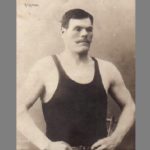 French and other foreigners looked at Koshcheyev as Russian “miracle” and predicted him a huge success. Russian strongmen 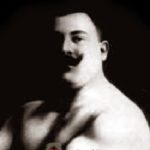 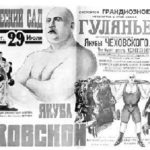