Smolny Institute for Noble Maidens – the first female institution in Russia, which marked the beginning of women’s education in the country. The Institute was founded on the initiative of Ivan Betsky, and in accordance with a decree signed by Catherine II on May 5 (April 24) 1764. The purpose of its creation was, as usual, very good – “give to the state well-educated women, good mothers, contributing members of the family and society”. Initially, for admission to college was required to pass exams – a bit of French, even less – Russian, plus the presence of a certain religious education, and noble origin, which considerably reduced the amount of applicants. 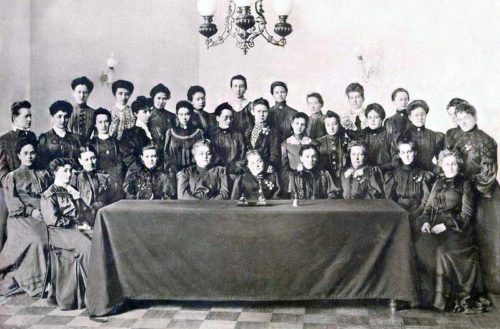 To enter the institute could only daughters of the nobles, whose ancestors were listed in the III, V and VI volumes of the book of noble families, or whose fathers, grandfathers were ranked at least the 9th grade (captain) in the military or 8th grade (collegiate Assessor) in the civil. However, few of the nobles were willing to condemn their daughters to study continuously for 12 years, after which a hard question arose about the future marriage of over- educated girl. After 1825, many children of the rebellious Decembrists studied there: two daughters of Kakhovsky, for example, finished the course with silver medals. It is said that when the princess came to the institute, the daughter of the emperor and the daughters of leaders of opposition were having fun peacefully playing together. 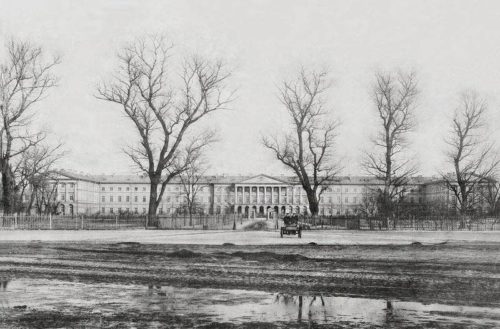 Foreigners also studied there. Shamil’s granddaughter and daughters of the Georgian princes, princesses of Montenegro, and daughters of Swedish aristocrats. Quite a number of girls were sponsored by special grants of the imperial family, or just rich people. 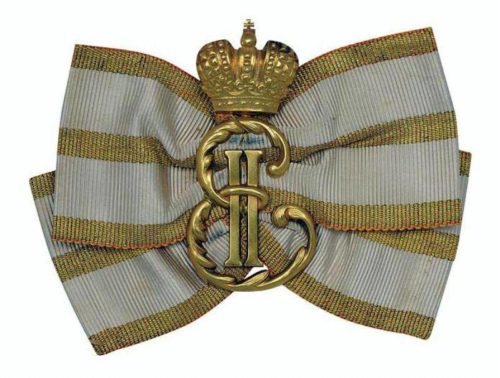 Sign of the best graduates of the Smolny Institute

According to the results of training were given awards and ciphers. Identifier – a metal monogram of the reigning empress, it was worn on the left shoulder on the bow. Color depended on the institution.
Ivan Betsky originally stood at the head of the Educational Society, taught ten girls from each reception, putting on their names a special bank capital. Contributed to the institute Princes Orlov and Golitsyn, patrons Demidov and Saltykov. 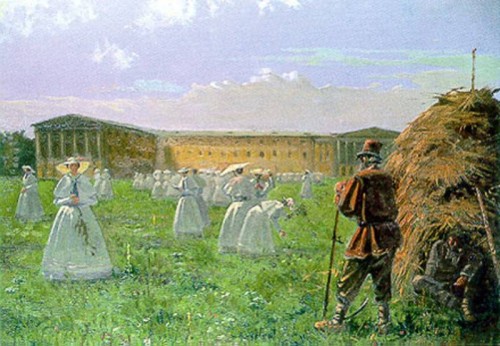 A. Belousov, meadow in front of Smolny. The girls on a collective walk

Smolyanka (student of Smolny), trained on someone’s private capital, worn ribbon on her neck, the color of which was chosen by sponsor. So, sponsored by Paul I students wore blue ribbon, Demidov’s – protégé tied a green and Saltykov – crimson. For those who could not get any scholarship payid their relatives. At the beginning of XX century the payment was about 400 rubles a year. 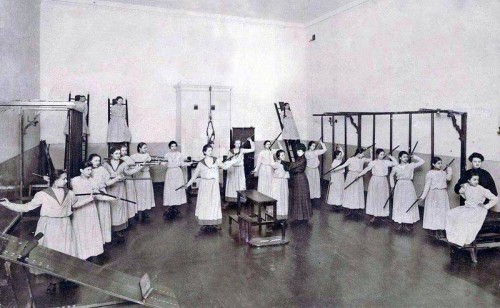 The daily routine at the institute was strict: the girls got up at 6 o’clock in the morning, then – 6 or 8 lessons. The time for games was very limited. Girls lived in dormitories for 9 people with a lady watching over them. In addition, there was also a classy lady who controlled the behavior of the girls in class. 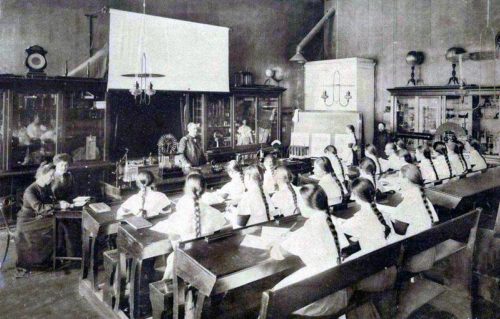 Smolny Institute for Noble Maidens, classes. French language was the most important lesson, even sacred 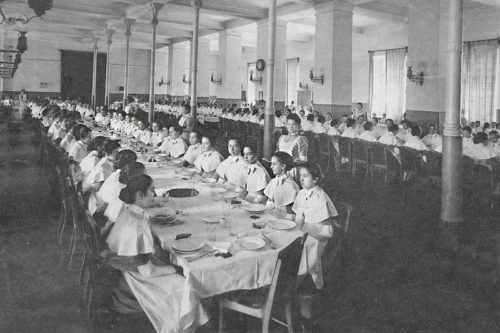 In the canteen. Smolny Institute for Noble Maidens

The regular menu in the middle of the XIX century in Smolny:
– Morning tea with buns
– Breakfast: a piece of bread with a little butter and cheese, dairy servings of cereal or pasta
– Lunch: soup without meat, the second course – the meat of this soup, the third – a small pie
– Evening tea with buns

More than half of the girls were in the hospital with a diagnosis of “exhaustion”. 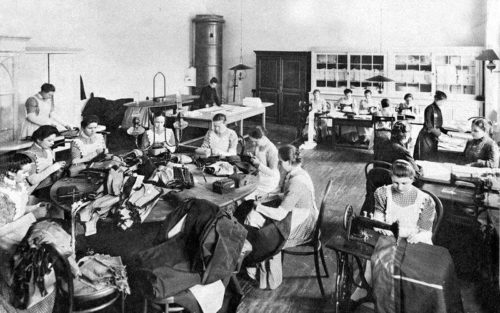 Smolny Institute for Noble Maidens. In the sewing room. Yearbook of the Institute in 1889.

Corporal punishment of pupils was not adopted, but with those who committed any offense, especially did not stand on ceremony, used the usual arsenal of means and methods of the institute’s teaching – shout, shamed before the entire institution: the victim had to stand in the middle of the dining room during dinner. Any violation of the order meant changing status from the institute’s “good behavior” to “bad behavior”. 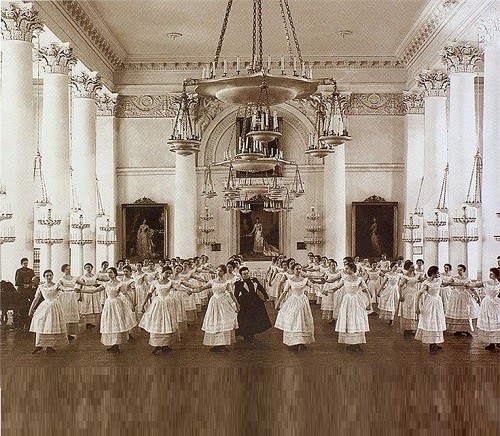 Teachers were recruited mainly from the married, and if unmarried he was chosen from aged, unattractive, or with physical disabilities, not to get maidens into temptation.

The earliest schoolgirls were separated from the influence of the family, but not of the world in general. In the walls of the Smolny arranged celebration dinners and performances. Several times a year (the name day of the Emperor and Empress, on New Year) balls were held, which were attended by all pupils and superiors. A few hours the girls danced with each other, not being able to laugh and have some fun, not to be punished. Occasionally (and by no means all) balls were held, with the Cavaliers – relatives (kinship was considered a prerequisite). With the start of World War I these small-numbered holidays stopped and, to have fun when there were fights was prohibited. 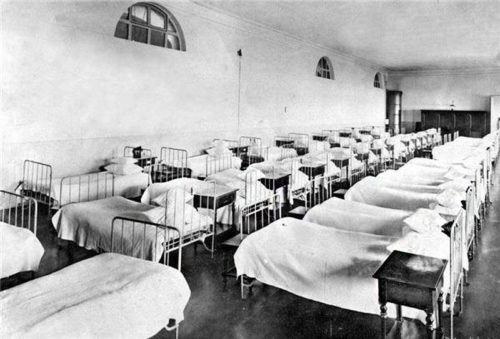 Smolny Institute for Noble Maidens. Dormitory. Yearbook of the Institute in 1889

Meetings with relatives were limited to four hours a week (two receiving days). It was especially hard for girls, brought here from far away. They didn’t see their families for months and years, and all correspondence was strictly controlled by the classy ladies, who read the letter before sending and after receiving. 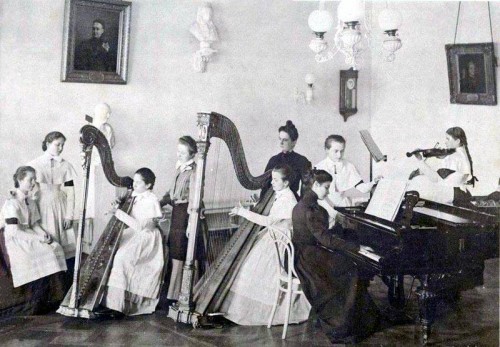 Smolny Institute for Noble Maidens. Learning to play the harp. Yearbook of the Institute in 1889

Adoration of the emperor was encouraged, it passed all sorts of boundaries – schoolgirls collected and carefully preserved “pieces of fries, cucumber, bread, etc. were stolen off the table, followed by stolen shawl that was cut into small pieces and distributed among the pupils, these “mascots” were worn on their chests. “With me do what you want, – said Alexander II to them – but do not touch my dog, do not try to cut his hair on the memory, as it was, in some places”. However, they say girls not only cut off the hair from pet of Alexander, but even managed to cut patches from his expensive fur coat in several places. 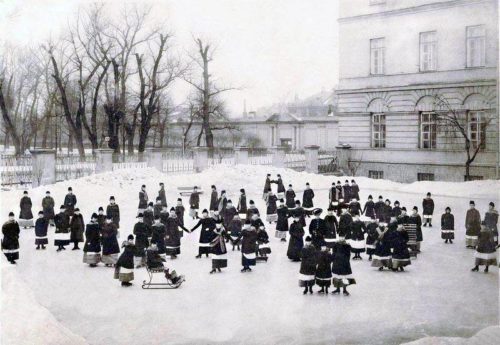 In the hospital it was warmer than in huge dormitories, a high-calorie diet, and many girls simulated the disease. However, many did not have to pretend. Usually, there were two areas: emergency hospital, which was used during epidemics or for ill, and the usual, where all the other patients were put. 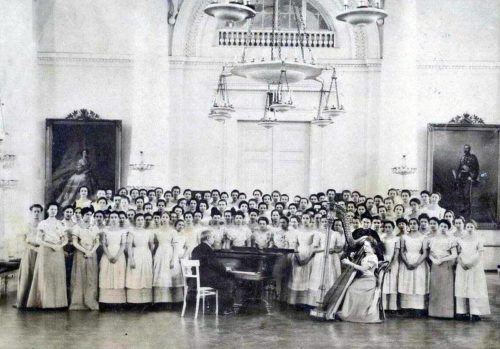 Specific relation to the few men and the absurd opinion based on the rules of decorum caused a lot of trouble to doctors. The idea of ​​undressing in the presence of a person of the opposite sex sounded sinful for shy girls, who were forced to endure the pain to end, which periodically ended tragically. 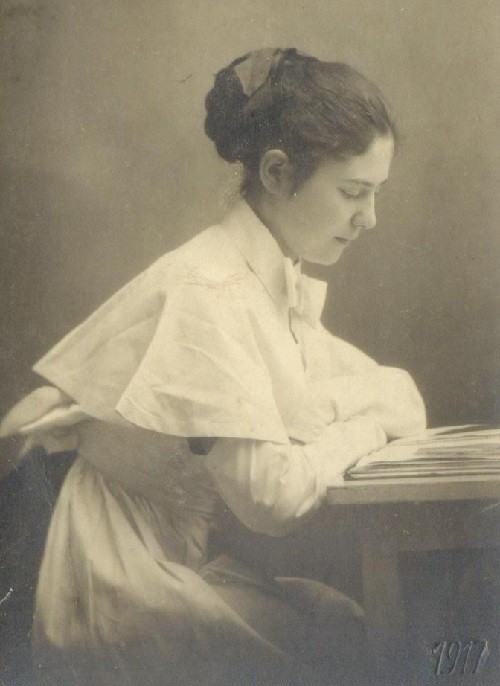 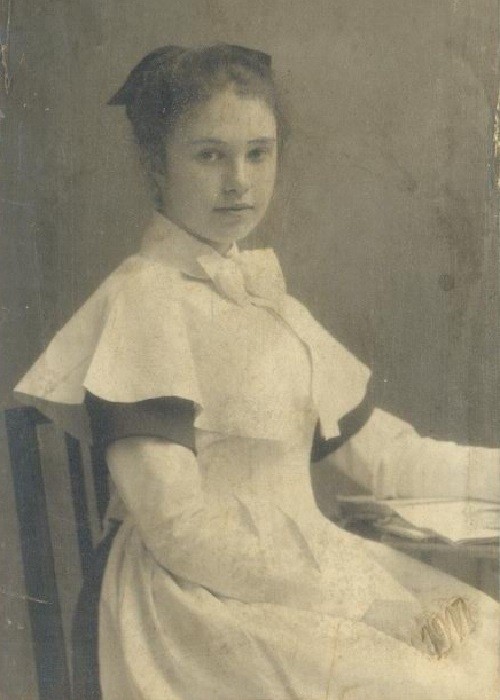 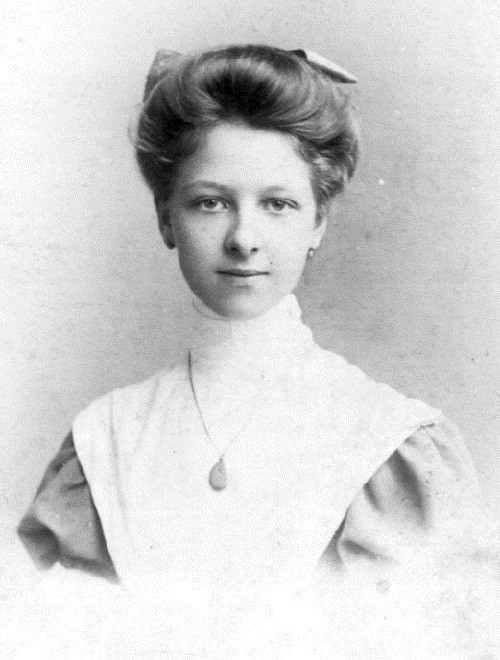 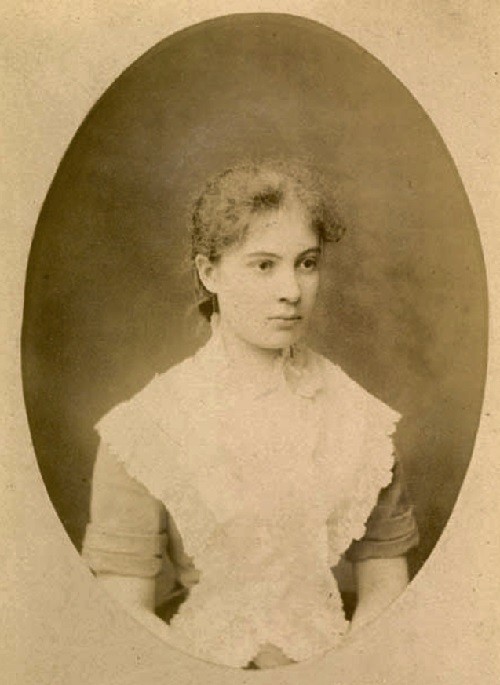 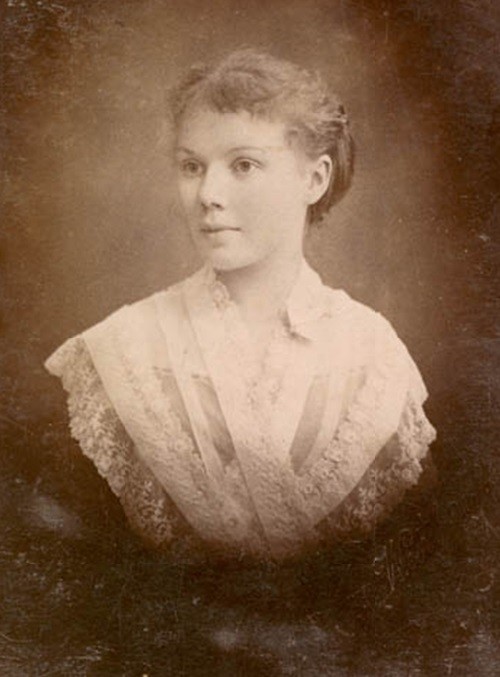 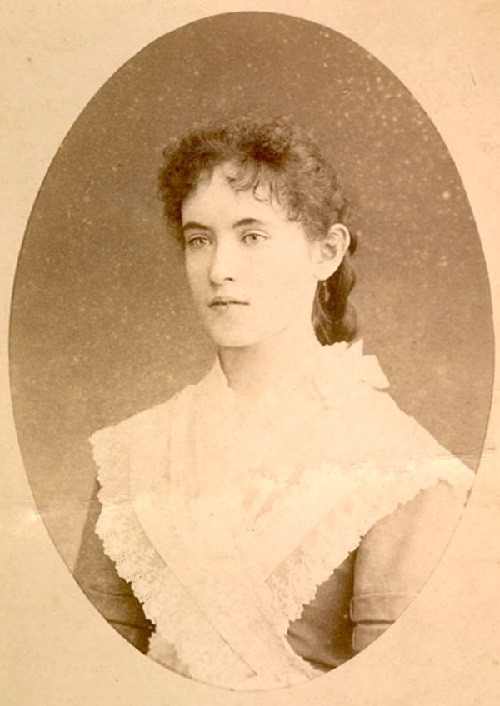 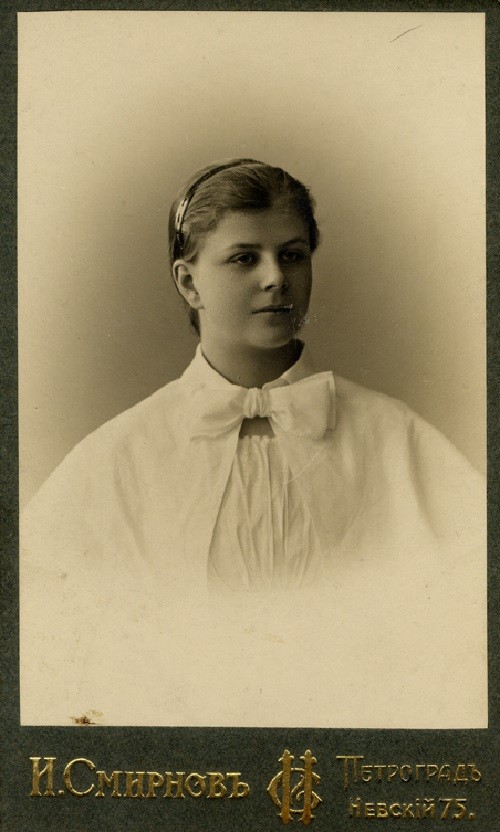 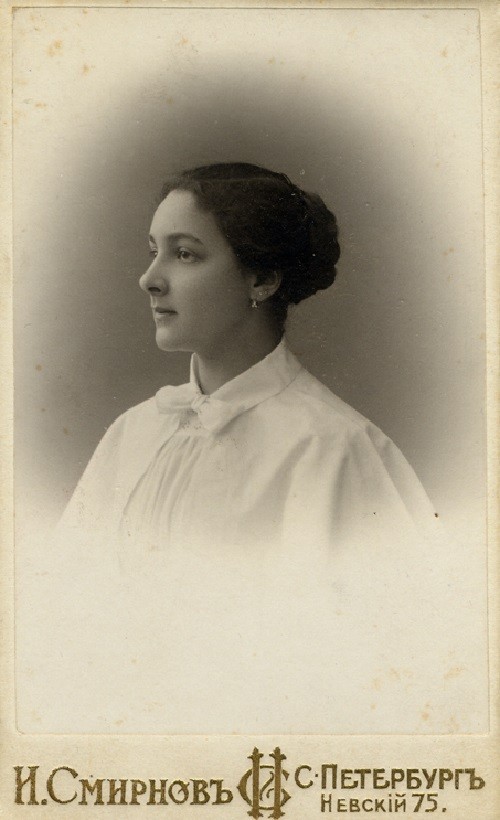 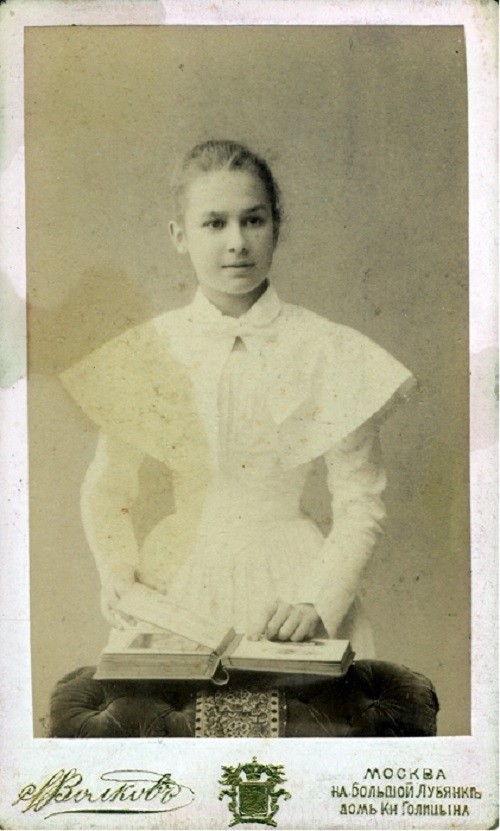 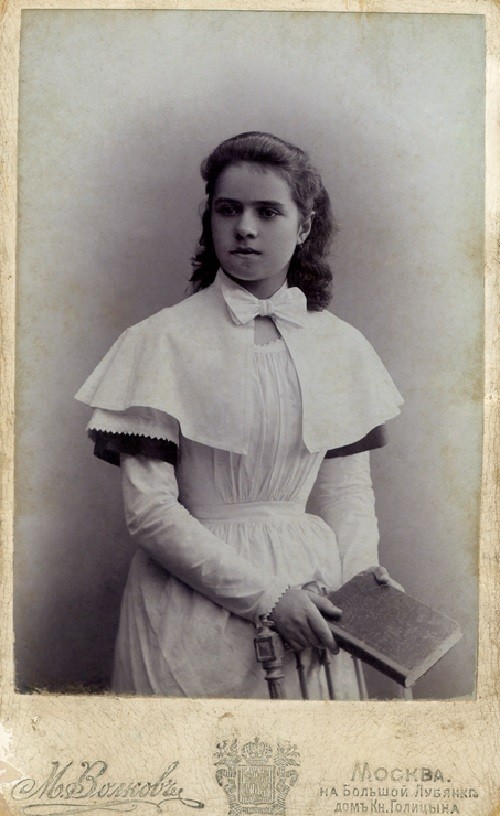 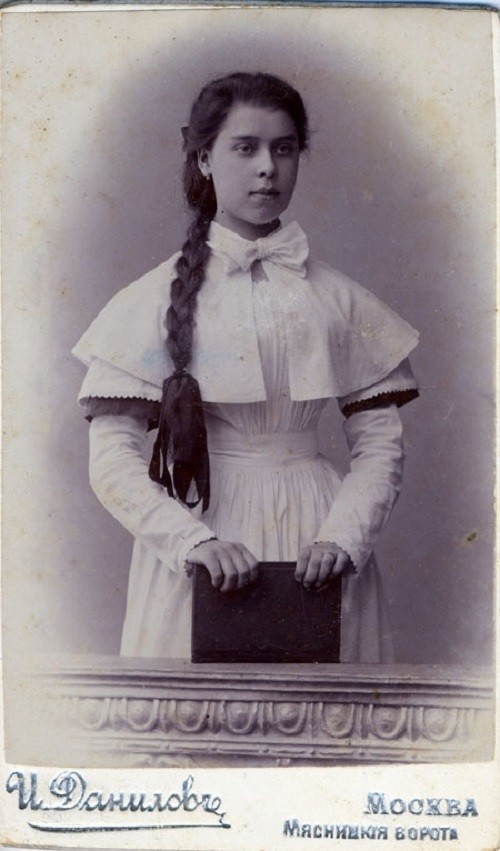 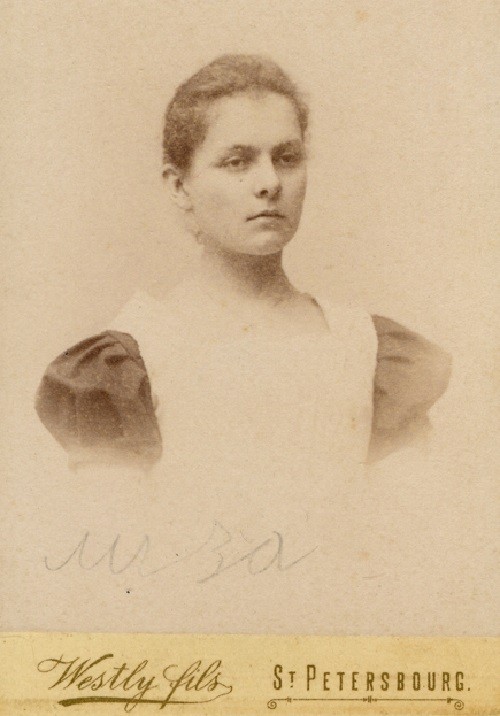 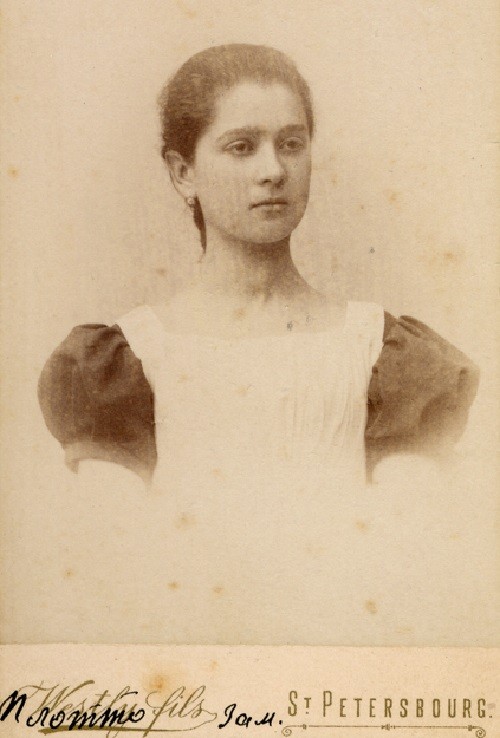 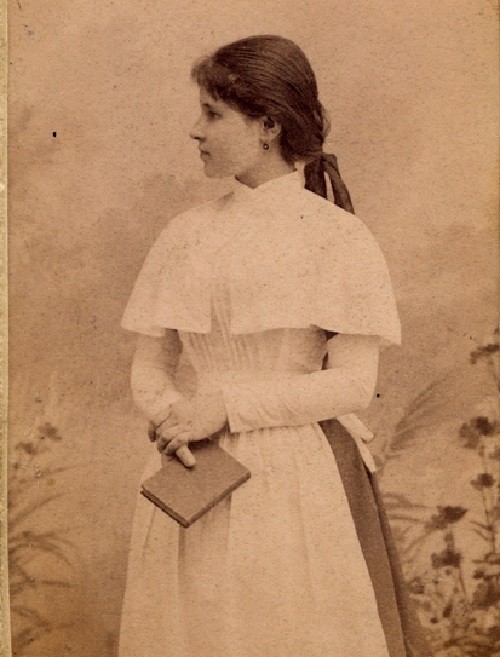 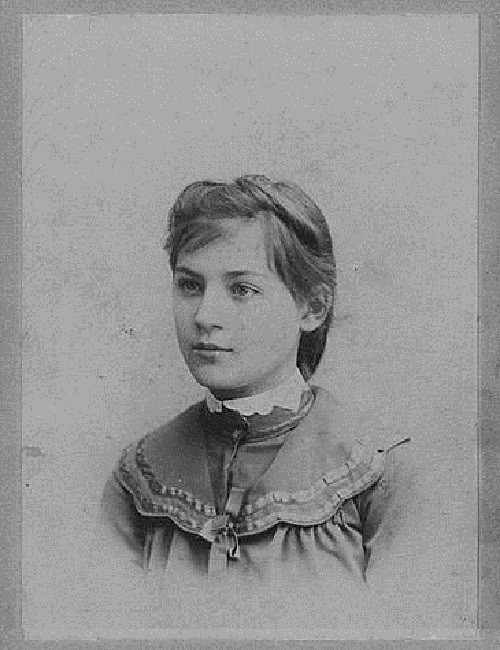