The northern capital of Russia, St. Petersburg annualy helds Scarlet Sails festival. Meanwhile, it is one of the biggest, most exciting, most beautiful and, at the same time, most technically sophisticated holidays in Russia. Unduobtedly, already traditional, this holiday for graduates is in the top of the largest and most interesting world events. However, the preparation for the next show lasts for many months, and the installation of all structures, light and pyrotechnics – more than 2 weeks. 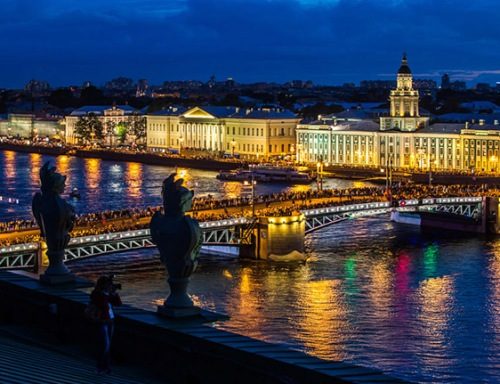 The most romantic night of the summer. Photo Marina Lystseva

Meanwhile, Hermitage roof partially restored, and new bridges installed around the perimeter. The first passage of a ship with scarlet sails took place in 1968 and up until 1979 graduates annually enjoyed this holiday on the water. The celebration was inspired by 1922 children’s book Scarlet Sails by Alexander Grin. 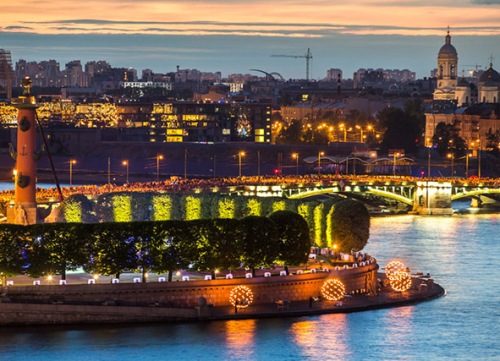 On the Spit of Vasilyevsky Island five fireballs lit up. One is hidden behind a corner. Photo Marina Lystseva

Preparing for the holiday takes about three weeks, and the idea of the program is brewing for nearly a year. The celebration is incredibly popular in Russia, it attracts crowds of about one million tourists. The entertainment includes performances of popular rock stars, St. Petersburg Symphony Orchestra, ballet, and many more. The program also includes rowing and motorboat races, a massive battle with pirates culminating in the appearance of a tall ship sporting spectacular scarlet sails. 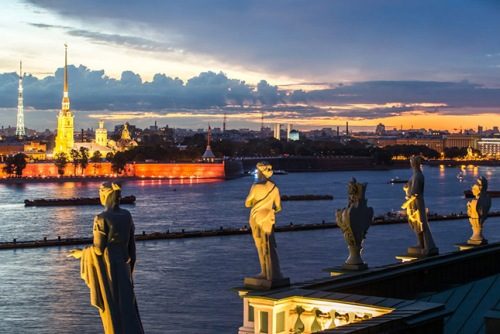