Tatar jewelry art is entirely associated with the decoration of a woman’s costume, which quite clearly reflected the peculiarities of their life, culture and artistic taste. Like most of the peoples of Russia, the Tatars over the course of many centuries carefully preserved their traditions in the field of the form and ornamentation of national clothing.

The dress always had a yoke or frill of various widths, which somewhat diversified its simple, laconic form. Sometimes, for decorative purposes, the camisole was wrapped in fur. Pants, the same for men and women, were always tucked into stockings or boots. The latter were a typical type of footwear for the Tatars and constituted the most original part of their national costume. Such boots were sewn from pieces of multi-colored leather and, along with an elegant headdress, served as an important element of the bright color of Tatar clothing.

Multicolor, built on the most unexpected color combinations, gave the Tatar women’s costume an amazing expressiveness. The materials were variegated fabrics – from unpretentious chintz to rich ornate brocade. Most often, oriental motifs were used in their ornamentation.
Polychrome fabrics, being the main artistic means of decorating a costume, excluded embroidery decoration, which was popular among other peoples of the Volga region.
An organic addition to the colorful color system of clothing was numerous jewelry – head, neck, chest, wrist and others, multi-colored stones and gilding of which further enhanced the decorative merits of the costume and made up a single compositional ensemble with it. Tatar jewelry was distinguished by a significant variety of types, forms, techniques and decorative solutions. Some of them performed, in addition to decorative, utilitarian functions, being used as fasteners for dress collars and camisole. All of them took their definite place in a woman’s suit and were his obligatory accessory.

Of the many types of women’s jewelry, the most distinctive are neck and chest jewelry. Among them, the most specific decoration, characteristic only for the Tatar national costume, was the so-called collar fastener with pendants. This very unusual ancient decoration consisted of a rectangular, oval or leaf-shaped clasp itself, which fastened the ends of the dress collar, and several pendant-chains descending to the chest, consisting of large plaques or coins. The clasp had two identical parts connected to each other by means of a hook, and each half of it was tightly sewn to the collar fabric.
Similar buckles without pendants were used to fasten the camisole. As a rule, the collar fastener was rarely performed in one technique. Sometimes it combined elements of filigree and chased work. The abundance of stones and gilding made this interesting piece of jewelry very effective and colorful. Collar clasps were most widespread mainly among wealthy Tatars and were especially popular in the 19th century, pushing into the background the once widely used necklaces. 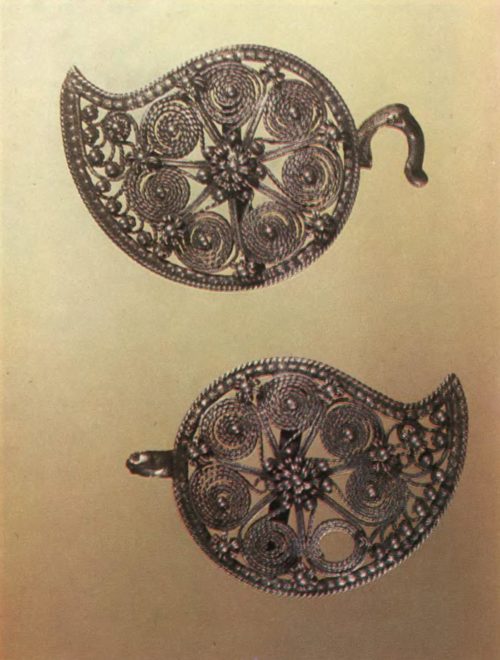 Another, no less peculiar, typically Tatar breast decoration was a sling. It was worn over the shoulder, made of fabric on which all kinds of small metal items were sewn: plaques with stones of various sizes and shapes, tokens, coins, chains, buttons and amulet items. The wealthier the owner of this jewelry was, the richer it was decorated. Since ancient times, the sling was obviously associated with the custom of wearing amulets and was used exclusively as a festive decoration. Various metal objects were also sewn onto its fabric base.
Head adornments, widespread among the Tatars, include headpieces and earrings. Both of these items were constantly worn and revered equally by all classes. Nakosniki were the most ancient and traditional decoration not only of the Tatars, but also of many peoples of the East and Central Asia. Tatar women, regardless of age, braided two braids, to the ends of which this decoration was attached. Simple braids consisted of coins on a cord woven into a braid; more complex ones – from one or more decorative plaques with stones and pendants in the form of coins and buttons. An eyelet for threading a lace was always soldered to the top plate. There were also double braids, which were attached to two braids at once.

With a significant variety of forms and decorative solutions, the Tatars did not develop a national type of earrings. Earrings similar to Russian and Oriental designs were often found. Tatars wore earrings, both small in size and rather large, all-metal and openwork, with or without stone inserts. By their design, earrings most often consisted of two or three movably connected parts.
Hand jewelry – bracelets, rings – were also worn constantly. Among the bracelets, three main varieties can be distinguished: undivided lamellar, consisting of two or three fragments, and chain-like.
Lamellar – solid hooped or with open ends – had different widths and were richly decorated with stones, gilding, chased or engraved ornaments, tightly fitted the hand and had a clasp. This type of bracelet was the oldest and most widespread among the Tatars. Bracelets in the form of chains consisted of large stones in the setting or of identical, often filigree plates, connected to each other.

Rings were one of the few pieces of jewelry worn by both women and men alike. Usually Tatars put on two rings on the bottom, but the richer ones decorated all their fingers with rings. The most common were rings with inserts of colored glass, as well as in the form of seals, decorated with niello and engraving.
There were rings of the Dagestan type – with massive opening shields – and others, the shield of which had the shape of a round or rectangular plate with Arabic inscriptions engraved on its surface. The latter, obviously, had the character of talismans. The inscriptions on the stones, playing an ornamental role, enhanced the decorative quality of the items.
A special group of jewelry includes plaques of various shapes and sizes that did not have an independent meaning in a costume, but most often were included as separate elements in other jewelry. The artistic solution of these particular items reflected in the best possible way all the variety of technical and ornamental techniques that the Tatar masters possessed. Typically, such plaques had a star-shaped or rectangular shape with cut corners.
Of the various techniques that all masters have long mastered, the technique of the so-called tuberous, or, as it was also called, relief filigree, is the most common and characteristic of the Tatars, requiring the highest skill, deserves special attention.

Only expensive and valuable jewelry was usually made using this technique. The lumpy filigree is an extremely distinctive phenomenon, the result of the rich heritage of local jewelry art. Its main difference from the flat openwork and applied filigree is that the ornament in the form of conical tubercles, made of thin wire, protruded in relief above the surface of the product, giving it weight and volume. If only a few jewelers owned this complex technique, then the techniques of chasing, embossing, engraving, and mob were widespread and perfectly mastered by the craftsmen.

With their help, original ornamental compositions were created, the motives of which were plant patterns in the form of stylized flowers, leaves, branches. Such an ornament was typical for all areas of artistic creation of the Tatars, since the laws of the Muslim religion, which most of them professed, prohibited the depiction of living beings. The plant motifs of the ornament of metal jewelry ranged from clear naturalistic images to highly generalized, almost conventional ones. Always consistent with the shape of the item, the ornament was freely placed in its plane, covering most of the entire surface of the item.
Perfectly using the artistic expressiveness of the material, Tatar jewelers skillfully combined various metal processing techniques with bright contrasting stones in color, while achieving an exceptional decorative effect. 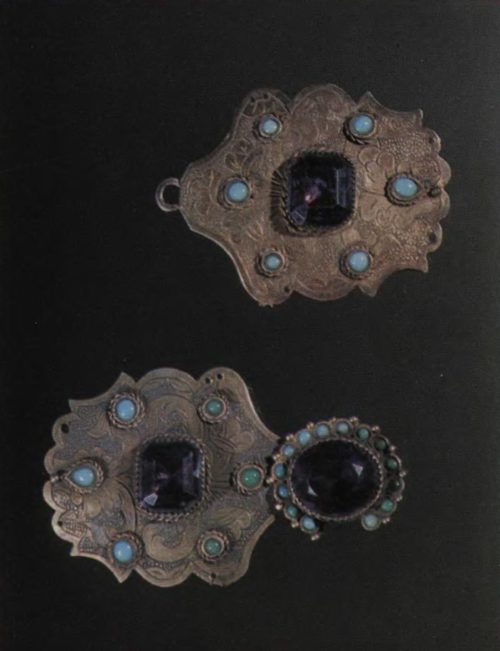 The stones gave the jewelry a great color, characteristic of all Tatar art. The methods of using stones in jewelry are varied. In some, they formed the basis of the product, and the metal played only a subordinate role, performing purely constructive functions. In other decorations, stone was used on a par with metal and formed a single ornamental composition with it. Items without stones were extremely rare. The stones in the jewelry were arranged quite picturesquely: often large stones were surrounded by small ones, sometimes inserts of colored stones covered the entire surface of the product or were collected in the form of islands.

The most favorite stones among the Tatars were carnelian, turquoise, amethyst, and aquamarine. In various combinations, they are found in almost every jewelry, and despite some disharmony in their combinations, the color scheme of the products does not look rough and conquers with its originality. The widespread use of stones in Tatar jewelry is to some extent explained by the fact that the Tatars attached symbolic meaning to them and used them as amulets. Along with precious and semiprecious stones, colored glasses were widespread in all types of Tatar jewelry, which were processed with the same care as any noble stone, and could equally coexist with it in one product. 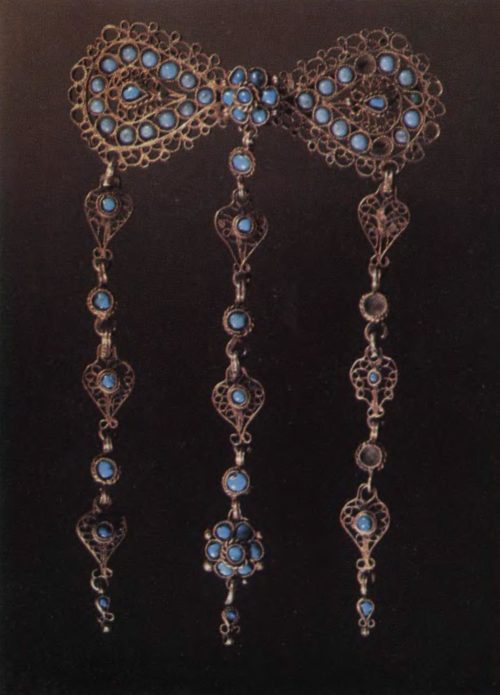 Kazan has long been the most famous center for the manufacture of unique jewelry. More massive products were created by craftsmen from the village of Rybnaya Sloboda, where the production of jewelry developed into a large handicraft industry. In terms of the quality of execution and their artistic level, the jewelry made in the traditions of the Tatar art of the masters of Rybnaya Sloboda was significantly inferior to the colorful and elegant products of Kazan jewelers. However, being more accessible to a wide range of buyers, they were ubiquitous among many peoples of the Volga region and beyond.
Following the established traditions, Tatar jewelers created original and original jewelry, many of which, in their aesthetic qualities and level of professional skill, were not inferior to the best examples of this type of artistic creation of other peoples of Russia. 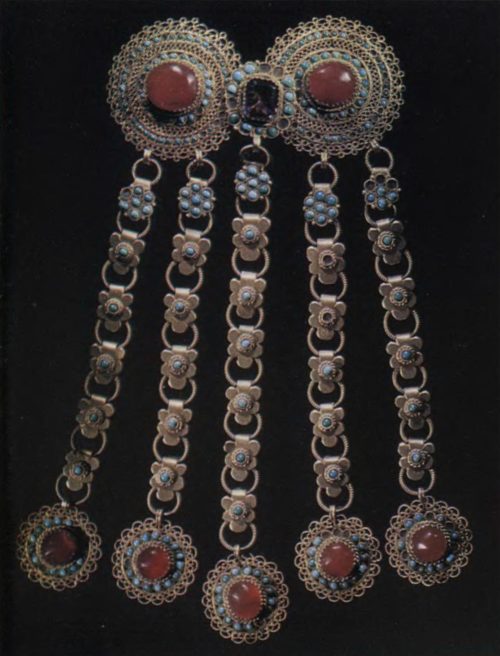 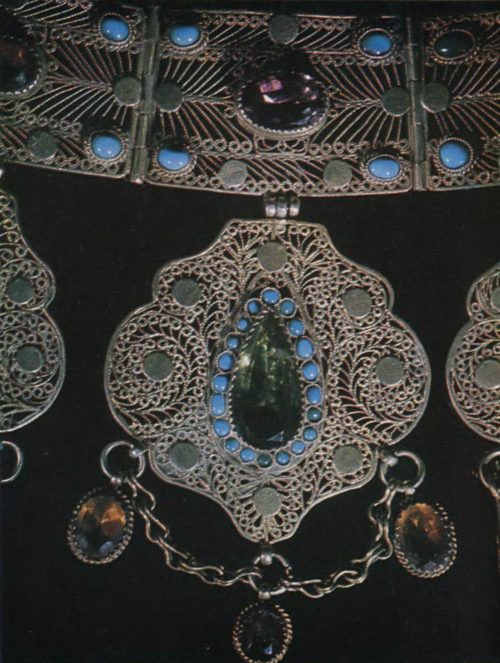 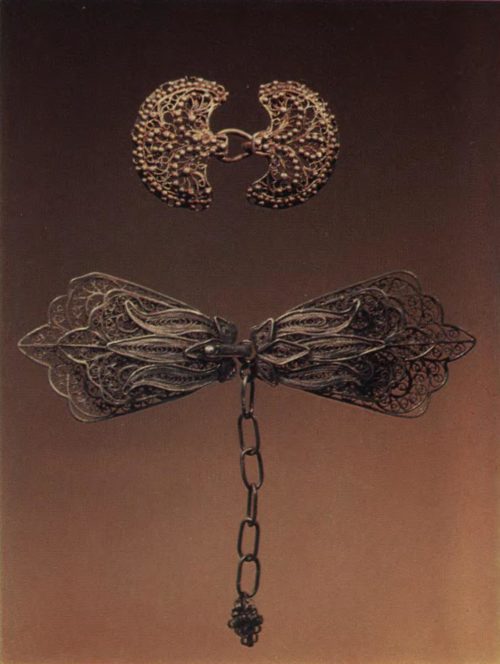