The origin of the Tula samovar

Tula samovar. According to one of the legends, the samovar was brought to Russia by Peter I. But there are no historical facts confirming this version yet. On the contrary, scientists argue that the Great King could not have brought it. He died in February 1725, and the first mention of the samovar dates back to 1740. It is described by the customs officers of Yekaterinburg as the goods of one of the merchants: “A samovar with a device, copper, tin-plated, weighing 16 pounds, factory own work at a cost of 4 rubles 80 kopecks.”

The history of Tula water heaters begins in 1778. It was in this year that official sources report the discovery of samovar production by the Lisitsin brothers.

It turns out that the homeland of the samovar is Ural, not Tula. But the Ural factories did not continue the samovar business. And the Tula artel workers made the production of samovars an art – each master created his own unique product. People came to admire them not only from all cities of Russia, but also from abroad. For their skill, the samovar workers of Tula were given the right to put their own brand.

By the beginning of the 20th century, there were 150 models in the factories of Tula, differing in volume, shape and design. Samovars were also different in purpose, which was reflected in the name:

“Egoist” – for drinking tea alone;
“Home” – put on tables during family gatherings or for receiving guests;
“Road” with removable legs – you could drink tea on the train or in the carriage;
“Tavern” – was placed in public places;
“Marching” – for carrying by soldiers in backpacks during hostilities.

Tula samovars also made unique specimens. In 1909, 5 samovars with a volume of one glass of tea, different in shape and decoration, were made for Nicholas II at the Batashevsk factory:

The Shemarins plant supplied products to the Persian Shah. The products of the artel workers of V.S.Batashev were constantly exhibited at Russian and foreign exhibitions. Tula samovars did not leave with any of them without awards.

Ural breeders can claim leadership in the production of water heaters. But in Tula, the masters created exactly that samovar, which became the soul of Russian tea drinking and a national symbol next to the balalaika, accordion and nesting dolls. 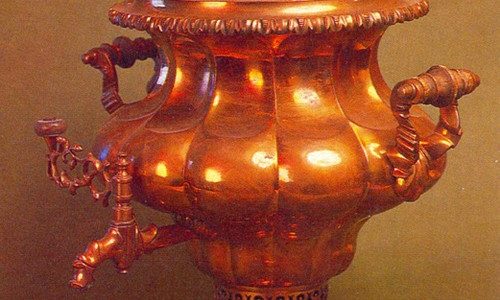