A very large Victory Museum in Moscow, the construction of which was conceived and then postponed. They even froze the construction site when, in the late 1980s, the country entered a period of rethinking its own history. But in the end everything worked out, and so grandiose that you cannot even imagine the scale of your own future impressions!

But in the wake of perestroika, they argued about whether the Victory Museum was needed in Moscow in principle. Fortunately, they found a consensus, and now Muscovites cannot imagine cities without the majestic Poklonnaya Gora, on which not only a museum is located, but also an open-air exhibition of military equipment (you can get there right after the museum with a general ticket), and temples of different denominations (here – free) in Victory Park.

There is a lot of interactivity in the museum, up to the fact that holograms of soldiers suddenly start talking to you from the wall: for this effect you have to stand opposite, right in the specially outlined footprints of boots. In dioramas, immersion in the era is also guaranteed: the sounds of air raids and exploding shells are accompanied everywhere. In general, if your children, and you yourself, have not been here yet, be sure to come.

The idea to build a memorial park on Poklonnaya Gora back in 1983. More precisely, this year the CPSU Central Committee approved the idea. And in order to attach special importance to the construction site, they decided to build the Central Museum of the Great Patriotic War in Moscow and the entire complex not only with budget money, but also, mainly, with public donations. In total, 194 million rubles were collected, while the total construction estimate was 212.6 million. By the way, with the money collected by the Russians, a museum and monuments were erected on the Borodino field in honor of the 100th anniversary of the 1812 war.

They wanted to complete the construction by 1989. But then perestroika burst out, they began to judge and play: is there a need for such a museum at all? In the heat of the moment, the already erected structures were almost dismantled. By 1991, the facilities were mothballed.

But then they remembered that in 1995 the 50th anniversary of the Victory is coming. They began to prepare, the construction of the museum was resumed. And inaugurated on May 9, 1995. True, they completed the construction only later. But most importantly, as they say, the ice has broken.

At the opening, then US President Bill Clinton said: “The Museum is raising new heroes who will inherit the country’s glory and greatness, an endless source of wisdom. The museum shows that great people have great people. ” For modern Russians to hear such a confession from the lips of an American is from the realm of fantasy.

On the occasion of the opening of the museum, the Victory Parade was held not only on Red Square, but also on Poklonnaya Hill. And on the facade of the new museum that day the best films about the war were shown.

Whichever diorama you go into – the accompanying noise from the bursting of shells plunges you into that terrible era. The “Siege of Leningrad” will seem to be the richest and strongest in content, perhaps. Maybe because in it all of us familiar lions on bridges across the Neva are immersed in devastation and pain?

Hall of Memory and Sorrow

In the center of it there is a sculptural group “Grieving Mother” of white marble. The memory of 26 million 600 thousand Soviet citizens who perished and disappeared is immortalized here. Portraits of the dead are floating along the walls. The electronic “Book of Memory” was immediately opened. It was established in 1995. This electronic name catalog contains the names of the dead, missing soldiers. Here you can find your relative if he is included in the “Book” by entering data in special fields.

Exposition of the Generals 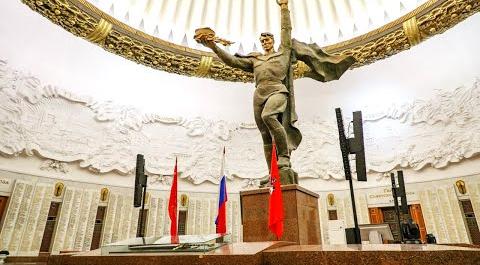 Three-dimensional historical and artistic panorama “Battle for Berlin. The feat of the standard-bearers ”

Shows the key points of the capture of Berlin. The visitor enters the building through a gap in the wall. Here he finds himself in the apartment of a German artist, but he sees the situation inside a residential building during the war. But before us is an episode of the second attempt to storm the Reichstag on April 30, 1945.

The panorama ends on the steps of the defeated Reichstag: destroyed sculptures, bullet marks and, of course, the autographs of our victorious soldiers on the columns. In general, you are not just a spectator here – you are overwhelmed by the feeling of immersion: under your feet there are real paving stones, fragments of shells … Moreover, you can touch objects, which only enhances the effect of presence.

There are many of them here. For example, the observation children’s “We have won!” (500 rubles per person). Children are given caps, children enter dioramas, where they are told the most important and interesting things. Between calls, you will not get bored either. The guides command a small detachment to either march in formation (one or two!). Then settle for a halt (during which, again, they say something). In general, this is not even an excursion, but a kind of role-playing game.

Or, for example, there is an excursion for the smallest – “River and Stream” (for a group of 1 to 5 people the price is 2000 rubles). According to the organizers’ idea, in the heroic interactive fairy tale “The River and the Stream”, the kids will play the role of the Stream, which should help the mighty Dnieper in a grand battle. Everything takes place in the diorama “Forcing the Dnieper”.

Statues and bas-reliefs in a cloud of water splashes. The main summer decoration of